Early results from the Haryana Assembly elections indicate a close fight between the incumbent Bharatiya Janata Party (BJP) and the Congress as counting began on Thursday morning. The BJP is leading in 37 seats in the state, closely trailed by the Congress at 34.

Trends from the Haryana Assembly elections indicate a close fight between the incumbent Bharatiya Janata Party (BJP) and the Congress as counting began on Thursday morning. The BJP is leading in 39 seats in the state, closely trailed by the Congress at 32.

Political upstart Jannayak Janta Party (JJP), which came into existence in December last year, is leading in 11 seats.
In Maharashtra, the incumbent BJP and its alliance partner Shiv Sena appear to have all but secured majority. At 3 pm, the BJP was leading in 105 seats while its alliance partner was ahead in 62 constituencies. The Congress was lagging behind the alliance with 39 seats.
>> Follow CNBC-TV18's full election coverage here
As trends solidified, the talk in Maharashtra quickly turned to the post of chief minister with the junior alliance partner, Shiv Sena, keen to install one of its own as CM. Party chief Uddhav Thackeray has reminded alliance partner BJP of their 50:50 pre-poll deal on the CM question.
In another interesting turn of events, the Nationalist Congress Party is set to win more seats than the Congress and almost as many as the Sena.
Maharashtra chief minister Devendra Fadnavis secured an easy win on the Nagpur South West seat, while first-time contestant Aaditya Thackeray was a comfortable winner from the Worli constituency.
>> BJP-Shiv Sena on road to power in Maharashtra - follow live 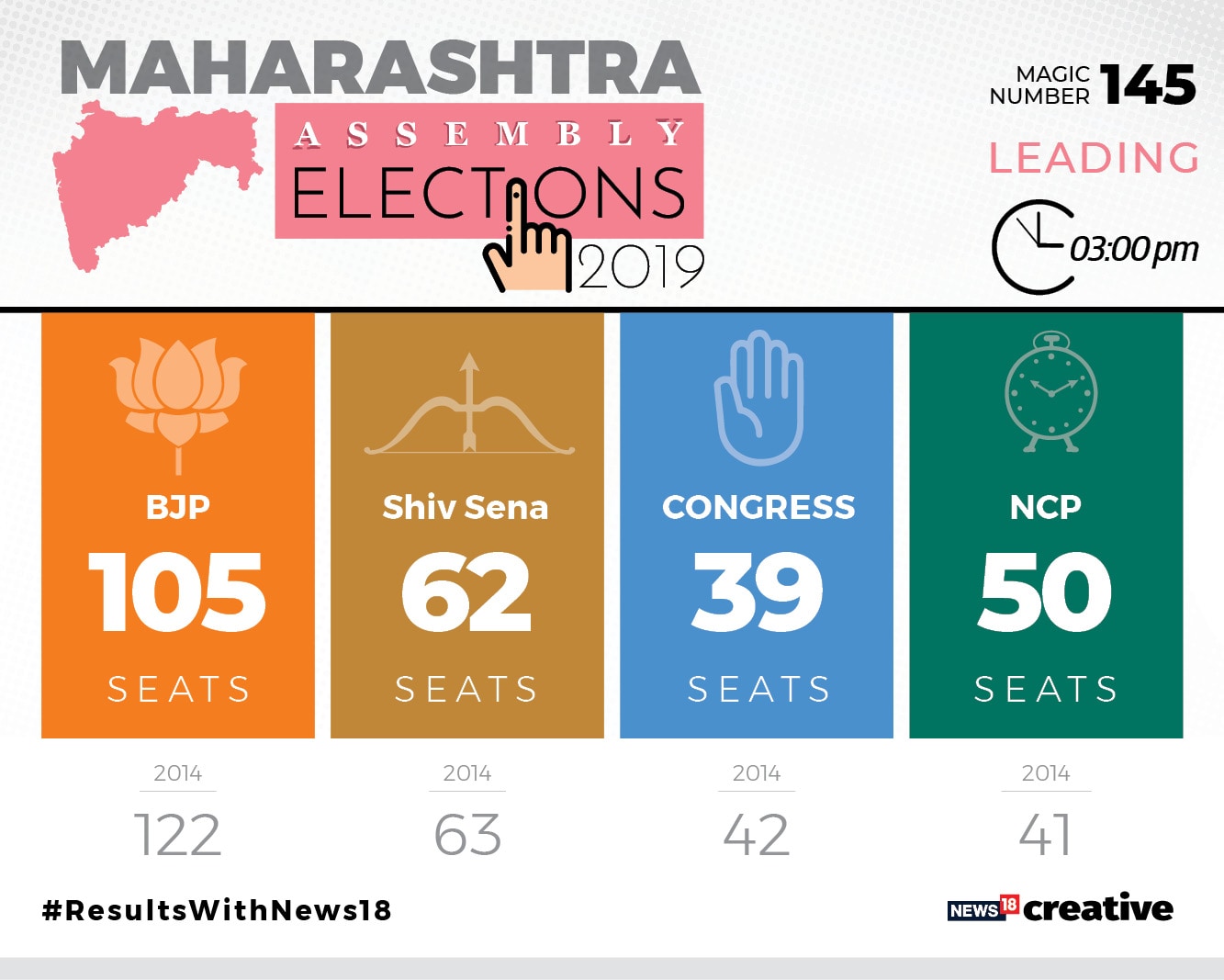 Haryana elections will decide the fate of chief minister Manohar Lal Khattar, who is contesting from Karnal constituency. The BJP had a pre-poll target of winning more than 75 seats but it proved well beyond its reach as it is failing to match its tally from five years ago.
Khattar won his seat from Karnal with more that 60 percent of the votes but political debutante and wrestler Babita Phogat lost in Dadri. Yogeshwar Dutt, another wrestler in the fray, also failed to secure a win. He lost from the Baroda constituency.
Dushyant Chautala of the JJP secured a comfortable win in Uchana Kalan, while former state chief minister from the Congress Party, Bhupinder Singh Hooda also won his seat in Garhi Sampla-Kiloi.
The JJP will hold the cards in case of a hung Haryana Assembly. However, party chief, Chautala, is keeping cards close to his chest so far.