Updated : January 23, 2021 04:04 PM IST
In a fortified and emptied Washington DC surrounded by massive security and barricades after the recent attack on the Capitol, a hard-won but joyful tryst with democracy was kept.
The new president and vice president, despite security concerns, walked for a short while in the parade, recreating some of the pageantries of former inaugurations.

It finally came to pass – the anxiously awaited inauguration of President Joe Biden and Vice President Kamala Harris on January 20 – and millions of Americans breathed a collective sigh of relief as this age-old ritual turned out to be normal in its sheer simplicity and beauty, blessed by sunshine in the midst of winter.

In a fortified and emptied Washington DC surrounded by massive security and barricades after the recent attack on the Capitol, a hard-won but joyful tryst with democracy was kept.

For millions of women and girls worldwide, the inauguration of Kamala Devi Harris as the first black and South Asian woman vice president of America was an awe-aspiring moment – a feeling of being right in the middle of history being made. It was a ground-breaking day of so many firsts. Harris was accompanied by her husband Doug Emhoff, the first-ever Second Gentleman in American history.

The real start of the inauguration was a day earlier when Biden and Harris, as future custodians of America, performed the most important task of remembering the 400,000 Americans lost to the pandemic with the poignant Covid-19 Memorial held with prayer and song, at the Reflecting Pool at the Lincoln Memorial. There were 4000 lights illuminating the dark, representing the lost 400,000 souls whose families and friends did not get a chance to bid them farewell. Despite the recent insurrection on the Capitol by rioters, the Biden-Harris administration had decided to hold the inauguration ceremonies outdoors as the nation celebrated the continuation of democracy. Due to security concerns, Americans watched the proceedings from home and were represented by a field of thousands of American flags. Donald Trump, the outgoing president, snubbing history and convention, refused to attend the inauguration but in a belated note of grace, former vice president Mike Pence and his wife did attend.

In his inaugural address, Biden laid out a blueprint for changes. He also said: “Here we stand looking out to the great Mall where Dr. King spoke of his dream. Here we stand, where 108 years ago at another inaugural, thousands of protesters tried to block brave women from marching for the right to vote. Today, we mark the swearing-in of the first woman in American history elected to national office – Vice President Kamala Harris. Don’t tell me things can’t change.” It was fitting that Kamala Harris was administered the oath of office by none other than Sonia Sotomayor, the first Hispanic and Latina woman to be Supreme Court Justice. On this history-making day, the most emotional and inspiring event was a poem recited by 22-year-old African-American Amanda Gorman, who is the Youth Poet Laureate of America, and as she mused, on the occasion of Kamala Harris’s inauguration: “Somehow we've weathered and witnessed a nation that isn't broken, but simply unfinished. We, the successors of a country and a time where a skinny Black girl descended from slaves and raised by a single mother can dream of becoming President, only to find herself reciting for one.” 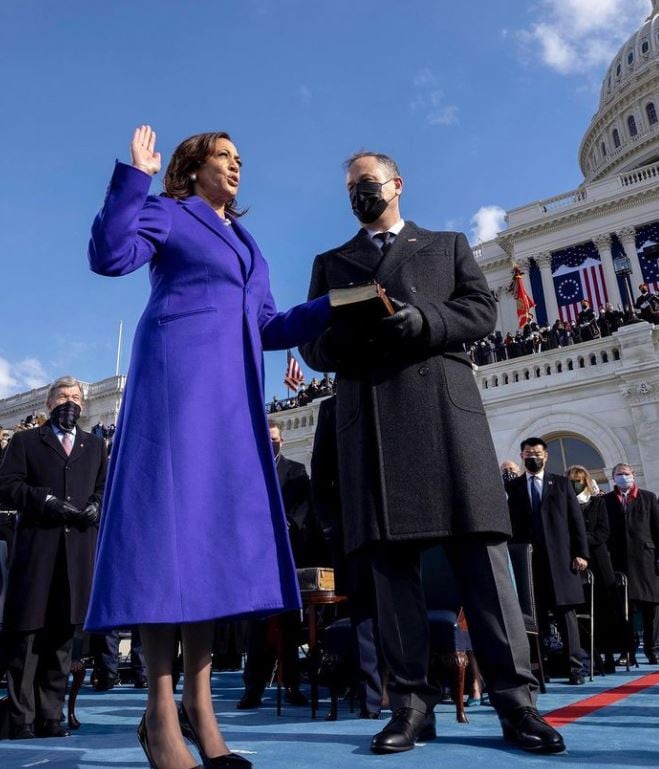 Indeed, the change is there for all to see as this administration has attempted to bring the real America to Washington, with more minorities and more women playing a substantial role.

After the swearing-in, Biden and Harris laid a wreath at the tomb of the Unknown Soldier in Arlington in the presence of three former presidents and their spouses – George W Bush, Bill Clinton and Barack Obama.

The new president and vice president, despite security concerns, walked for a short while in the parade, recreating some of the pageantries of former inaugurations. The two actually hit the ground running, getting to work immediately after the inauguration. Their formidable agenda includes bringing the COVID-19 pandemic under control, providing an economic relief package, and tackling climate change, racial equity and immigration reform. Right after taking her oath of office, Harris got to work immediately, administering the oath of office to three new senators who will help change the balance of power in that body. VP Kamala Harris swears in the first Cabinet member, Avril Haines, after her confirmation as Director of National Intelligence by the Senate

This year there were no fancy inaugural balls though IMPACT, the Indian American advocacy and political action committee, hosted the virtual Presidential Inaugural Committee’s official AAPI inaugural ball. It had participation from Asian American political leaders and entertainers - Neera Tanden, Reps. Ami Bera, Pramila Jayapal, Andy Kim, and Raja Krishnamoorthi; former Olympian Michelle Kwan; actors Kal Penn, John Cho, Kumail Nanjiani, and Chloe Bennet. South Asians for Biden also set up an Inaugural Ball on the 22nd which is hosted by many trailblazers from Neel Katyal to Nina Davaluri to Rizwan Manji. Indian-Americans worked hard on the election and the Georgia run-offs and are now ready to celebrate.

Right after the inauguration, there was a virtual parade across America and ‘Celebrating America’, an all-encompassing national concert that virtually brought in the spirit and diversity of America. This part-live and part-virtual concert starred Bruce Springsteen, Katy Perry, John Legend, Demi Lavato and a wonderful mash-up of noted names serenading the everyday heroes – doctors and nurses, essential workers, students and teachers.

Kamala Harris, in her first speech to the nation as vice president at the Celebration of America, said: “In many ways, this moment embodies our character as a nation. It demonstrates who we are. Even in dark times. We not only dream, we do. We not only see what has been, we see what can be. We shoot for the moon, and then we plant our flag on it. We are bold, fearless, and ambitious. We are undaunted in our belief that we shall overcome, that we will rise up. This is American Aspiration.”

Through her inspiration, Harris has passed on this American aspiration to thousands of Americans, including many young Indian-Americans, who are choosing to follow in her path of public service. There are over 20 Indian-Americans in the Administration, and many young people fighting for racial and economic justice, many others involved with science, medicine, education and innovation. As Harris said, “A Great Experiment takes great determination — the will to do the work and then the wisdom to keep refining, keep tinkering, keep perfecting.”

With President Joe Biden, Vice President Kamala Harris plans to continue the American story of democracy and young Indian-Americans are a big part of it.