Campaigning for the remaining three phases of elections is on with full force. While Prime Minister Narendra Modi will lead BJP campaign with election rallies in Bihar and Uttar Pradesh today, Congress president Rahul Gandhi will hold campaign meetings in Madhya Pradesh's Tikamgarh, Damoh and Panna district. BJP president Amit Shah will address multiple rallies in Rajasthan's Dausa, Alwar and Bharatpur. Leaders from other parties will also hit the campaign trail. This blog will keep you posted on the latest updates and developments from the campaign trail in the Lok Sabha Elections 2019 today:

The Bhim Army will campaign in favour of SP-BSP alliance candidate Tej Bahadur Yadav who is contesting against Prime Minister Narendra Modi from Varanasi, the Dalit group's founder Chandrashekhar Azad said on Tuesday.On April 17, Chandrashekhar had rescinded his decision to contest against Modi form Varanasi, saying his outfit will support the SP-BSP alliance and Dalit vote should remain intact to defeat the BJP.The Bhim Army chief said he will be in Varanasi over the weekend to campaign in favour of Yadav, the BSF jawan who was sacked for his video complaining about food quality in 2017."I will campaign for him no just because he is the SP-BSP candidate, but because we have a lot of respect for our armed forces, unlike the BJP which exploits the valour of security personnel for votes," he said.

The Aam Aadmi Party has written to the Election Commission alleging Prime Minister Narendra Modi violated the model code of conduct by asking government officials to send information about their areas before his visits there.In its letter, the party has cited a media report according to which an e-mail was sent by the government's NITI Aayog asking bureaucrats in Union territories and at least one BJP-ruled state to send to the Prime Minister's Office inputs on local area knowledge ahead his visits.The AAP said it is a violation of the model code of conduct which state that ministers will not combine official visits with electioneering work and not use official machinery for electioneering work.

The Aam Aadmi Party has written to the Election Commission alleging Prime Minister Narendra Modi violated the model code of conduct by asking government officials to send information about their areas before his visits there.In its letter, the party has cited a media report according to which an e-mail was sent by the government's NITI Aayog asking bureaucrats in Union territories and at least one BJP-ruled state to send to the Prime Minister's Office inputs on local area knowledge ahead his visits.The AAP said it is a violation of the model code of conduct which state that ministers will not combine official visits with electioneering work and not use official machinery for electioneering work.

Demanding fresh elections in the Tripura West Lok Sabha seat, the CPI(M) on Tuesday alleged that the polling there was marred by "large-scale irregularities and outright rigging".The party said it has written to the Election Commission and even submitted documents to prove their case for repolling in the seat, where elections were held in the first phase on April 11."We commend the demand of the Left Front Committee of Tripura to countermand the entire election in 1-Tripura West constituency and hold fresh polls. It was marred by large-scale irregularities and outright rigging. In our estimation more than 50 per cent of the booths had no polls," said CPI(M) general secretary Sitaram Yechury.In its letter to the Election Commission, the party said that on February 20, 2019, the CPI(M) has brought to the poll panel's notice to specific concerns and possible threats to holding of free and fair polls."We had met the Commission on March 6, two days before the announcement and the notification of the polls. Regrettably, our worst apprehensions have been vindicated based on the actual developments.

Attacking Narendra Modi for claiming that 40 TMC MLAs were in touch with him, Samajwadi Party president Akhilesh Yadav on Tuesday said the prime minister should be "banned for 72 years" for his "shameful"speech. The Election Commission has recently barred several leaders including Uttar Pradesh Chief Minister Yogi Adityanath and Punjab Minister Navjot Singh Sidhu from campaigning for 72 hours due to poll code violations."Vikas (development) is asking... Did you hear the shameful speech of Pradhanji (PM)? After losing the faith of 125 crore countrymen, he (Modi) is now relying on the unethical assurance of defection allegedly given by the 40 MLAs," he tweeted."This reflects his (Modi) black money mentality. He should be banned for not 72 hours but for 72 years," he said.On the campaign trail in West Bengal's Serampore Lok Sabha seat in Hoogly district and Barrackpore constituency in North 24 Parganas, Modi assailed TMC supremo Mamata Banerjee over her prime ministerial ambitions, saying "Didi, Dilli door hai (Delhi is far away)."

"Though Puducherry is governed by the Union Territories Act 1963 and the status of Delhi is different and mentioned in the Constitution of  India (Article 239AA) and is governed by the Government of National  Capital Territory Act 1991, it is beyond any reasonable understanding  as to why the Modi government views these governments as subservient to its MHA," AAP leader Saurabh Bharadwaj said. 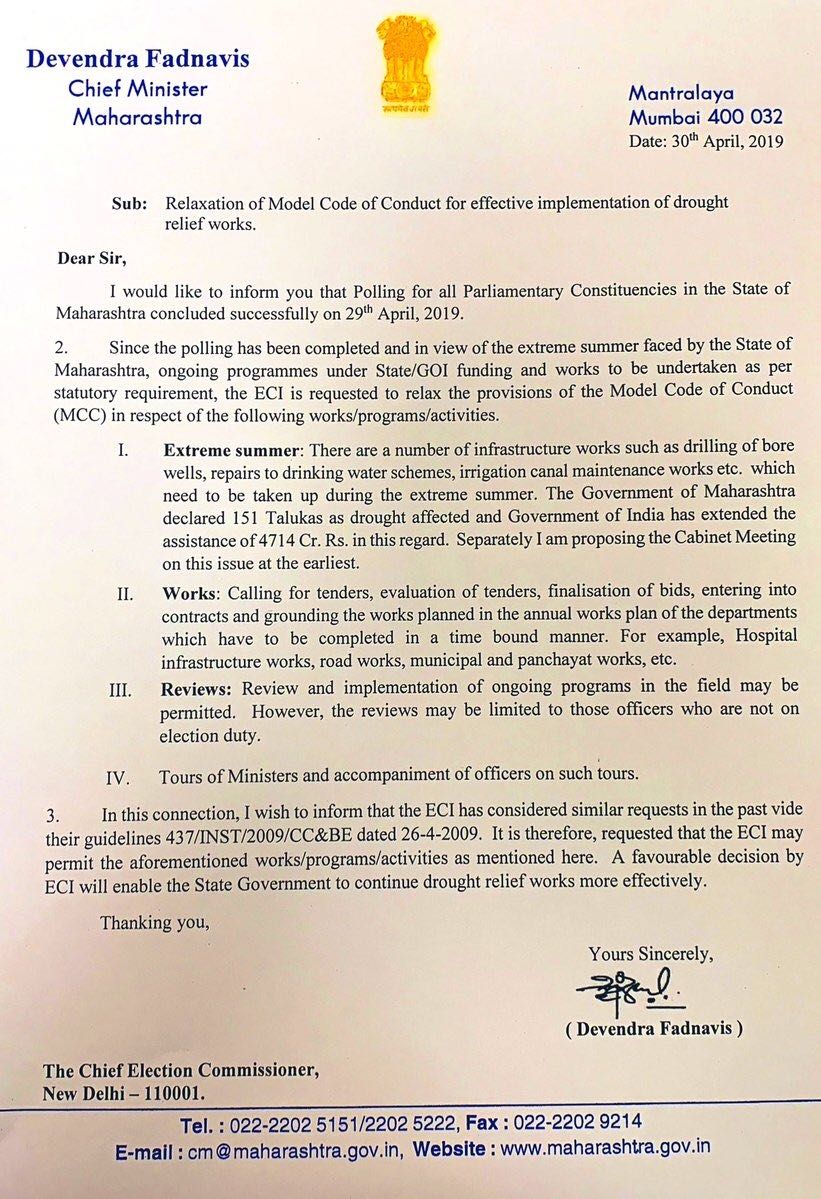 A day after the fourth-cum-final phase polling of the ongoing general elections ended in Odisha (both Lok Sabha and Assembly elections), BJD supremo and Odisha Chief Minister Naveen Patnaik left on his tour to the national capital city today morning and met the Chief Election Commissioner.In his media interaction, he said that he urged Election Commission regarding deferring of Patkura by-elections in view of impending Cyclone Fani.He said, " I have just spoken to chief election commissioner and his colleagues about delaying the Patkura by elections because of extremely severe cyclone is going to hit Odisha.Patkura is in kendrapada constituency. The CEO and his colleagues said they would look into it."

Congress president Rahul Gandhi on Tuesday said no farmer will be jailed for not repaying loan and 22 lakh youth will be provided government jobs in a year if his party comes to power at the Centre. Hitting out at Narendra Modi, Gandhi said that after completion of half of the Lok Sabha poll process, the Prime Minister's face has "withered", and claimed the PM will lose the elections and Congress would come to power. Addressing a rally here in Tikamgarh district of Bundelkhand region in Madhya Pradesh, Gandhi again targeted Modi over the controversial Rafale jet deal and blamed the NDA government's decisions of demonetisation and implementation of GST for "large-scale unemployment" in the country."When the Congress comes to power in 2019, no farmer will be sent to jail for not repaying bank loans," Gandhi said, while promising to provide government jobs to 22 lakh youth in one year and recruit 10 lakh youth in panchayats. He said if the Congress comes to power, it will bring a provision of "no permission" for first three years to those starting new businesses.

BSP president Mayawati on Tuesday said she would review support to the Congress government in Madhya Pradesh after their Guna candidate pulled out of the election race.Alleging the Congress was misusing the official machinery in Madhya Pradesh, she said, in a tweet, "The Congress is not less than the BJP in misusing the official machinery. The BSP candidate from Guna has been forced by the Congress to pull out of the election race but the BSP will give a reply by fighting on its own symbol and review its support to the Congress government."She further urged people to remain vigilant. "The view of Congress leaders in Uttar Pradesh that even if the BJP wins, the SP-BSP alliance should not win depicts their casteist, narrow attitude and double standards. Therefore, people's belief that it is only our alliance that can defeat the BJP is correct. People need to remain vigilant," she said in another tweet.