General elections 2019: In Assam and the north east, citizenship issue could queer the pitch for BJP and allies

The Bharatiya Janata Party (BJP)-led National Democratic Alliance (NDA) is looking to storm back to power in the general elections due by May, betting on the popularity of Prime Minister Narendra Modi, again. The party had won 282 Lok Sabha seats in the 2014 elections under the leadership of Modi, with a clean sweep in at least five states and four union territories. It was for the first time that a political party had secured a majority on its own after the 1984 elections when the Congress secured more than 400 seats in 1984 elections, riding on a sympathy wave in the aftermath of then-Prime Minister Indira Gandhi’s assassination. 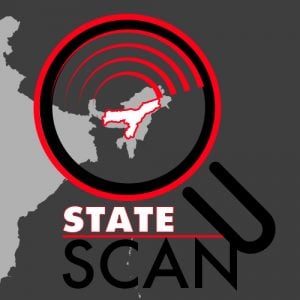 The BJP has already hit the ground running for the 2019 general elections, and sealed seat-sharing agreements in Bihar, Maharashtra, Tamil Nadu and Punjab with allies to counter a broader coalition of the opposition parties, largely led by the Congress.

In politics, it is said a week is a long time. By that reckoning, 2019 looks like a lifetime because of the changed circumstances. Narendra Modi is still popular, but there are several issues confronting his campaign, particularly the government’s promise to generate jobs. That apart, as it happens often in states, parties could bring to bear issues pertinent to influence elections.

Nowhere is this truer than in Assam and the northeast as we kickstart a series on state-by-state deep look at the approaching general elections along with a recap of how the BJP fared in the 2014 Lok Sabha elections in the key states and Union Territories and broad trends. 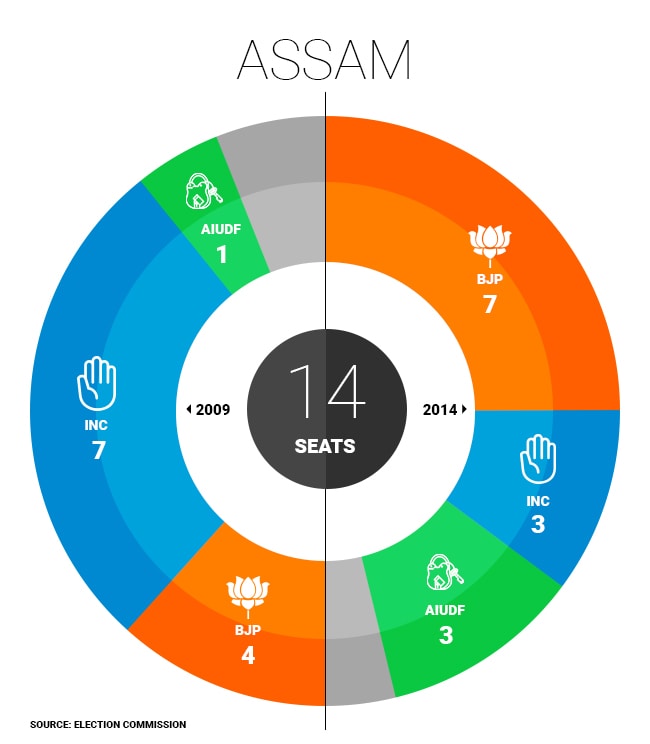 Assam will play a key role in the NDA’s strategy to retain power at the centre. As it happened with the preceding elections, the politics in the state will revolve around anti-immigrant politics and continue to shape the political narrative ahead of the elections in the gateway state to northeastern India.

Looking For A Repeat

The BJP has faced a backlash in the aftermath of the Citizenship Amendment Bill (2016) from local Assamese groups. The Asom Gana Parishad walked out of the coalition. Yet, the party won the recently held panchayat polls by winning around 50 percent of the total seats. Its alliance with the Bodo People’s Front (BDF) remains in place.

Another key player in Assam politics is Badruddin Ajmal's AIUDF, a party that was formed in 2005. The AIUDF secured 3 seats in 2014, improving its tally from the previous 1 in 2009. With the National Register for Citizenship (NRC) and the Citizenship Amendment Bill (2016) remaining two key political issues, Ajmal’s AIUDF will bank upon the support of Bengali Muslims for repeating its performance. The BJP has made significant inroads in the region since 2014 elections, with the party currently having its own chief ministers in Assam, Arunachal Pradesh, Manipur and Tripura. As part of its umbrella coalition of parties from the region under the North-East Democratic Alliance or NEDA, the BJP is also sort of part of the government in Meghalaya, Nagaland and Mizoram as well. BJP along with many regional outfits formalised the NEDA in May 2016.

That said, the BJP’s improved performance in the region is also a result of carefully crafted local alliances and in some cases, political machinations. Critics may point that more than investing in an organisational structure, BJP’s electoral fortunes have improved from welcoming rebels in its ranks.

The Congress, which held sway in the region for decades, is left with no government in any of the eight northeastern states. The party has been struggling to keep its flock together against an aggressive BJP-led alliance.

The Communist Party of India (Marxist) too lost power after more than three decades to BJP in Tripura. In the Bengali-dominated northeastern state, BJP’s young Biplab Deb took charge as chief minister. BJP had formed an alliance with the pro-tribal IPFT (Indigenous People’s Front of Tripura) fighting for a separate state for the indigenous people of Tripura. The IPFT won 8 seats, while CPM managed to win just 16 seats.

Among all the northeastern states, Sikkim — ruled by Pawan Chamling-led Sikkim Democratic Front — is the only state where the BJP is still attempting to expand its influence. Chamling, who is the longest-serving chief minister in the country, who has been ruling the state since 1994, hasn’t yielded space to the BJP at the state level. But he is part of the NDA.

According to reports, the BJP is backing footballer-turned-politician Bhaichung Bhutia's Hamro Sikkim to emerge as a political rival of the SDF. Bhutia formed his party in June 2018 and is reportedly receiving significant support among the people.

In Nagaland, the BJP ditched its alliance partner, Naga People’s Front before the 2018 assembly polls and joined the Neiphiu Rio-led NDPP (Nationalist Democratic Progressive Party). The party won 12 seats in state elections and emerged as the kingmaker in the 60-member state legislative assembly. In 2013, it had won just a single seat.

The Congress won 21 seats in the 60-member Meghalaya assembly in February 2018 elections, but failed to form the government. Assam chief minister Himanta Biswa Sarma, who is also the NDA convener, rallied behind the National People’s Party and cobbled a non-Congress government in place. BJP had won just two seats and supported Conrad Sangma (former Speaker P A Sangma’s son), who is now leading a coalition of 4 parties.

In Manipur, which went to the polls in 2017, BJP won just 21 of the 60 seats up for grabs against the Congress party's 28 seats. Chief minister N Biren Singh, who had joined BJP in October 2016, was able to manage the support of 32 MLAs, comprising a coalition of three parties — Naga Peoples’ Front (4), National People’s Party (4), Lok Janshakti Party (1) and independent MLAs.

The growing acceptance of the BJP in the region has come amid a sharp increase in the Centre's funding for infrastructure and development. A total of Rs 1,66,026 crore has been sanctioned for construction of over 10,000 km of roads in eight states under the National Highways Infrastructure Development Corporation Limited.

An additional Rs 7,000 crore has been approved for 850km stretch under the National Highway Authority of India. The ministry of road transport and highways has also sanctioned Rs 17,257 crore for respective state Public Works Department for construction of roads in the entire region. Prime Minister Narendra Modi has given a new slogan 'Act East,' replacing the former 'Look East.'

The central government has also changed the funding model and all projects are now 100 precent supported by the central government instead of former centre-state model. The change in the Indian Forest Act, 1927, allowing for cutting of bamboo on non-forest land for economic use has opened new avenues of job generation and entrepreneurship.