Of the 27 seats the BJP contested, it won 25, while the Congress only won Bangalore Rural and the JD-S Hassan.

Riding on the popularity of Prime Minister Narendra Modi, the BJP on Thursday made a near sweep in Karnataka, winning 25 of the state's 28 Lok Sabha seats, while another was won by an Independent candidate it supported.

In what may be their worst performance in the parliamentary polls in the state, the ruling coalition allies - Congress and the Janata Dal-Secular (JD-S) - could only win one seat each.
Of the 27 seats the BJP contested, it won 25, while the Congress only won Bangalore Rural and the JD-S Hassan. 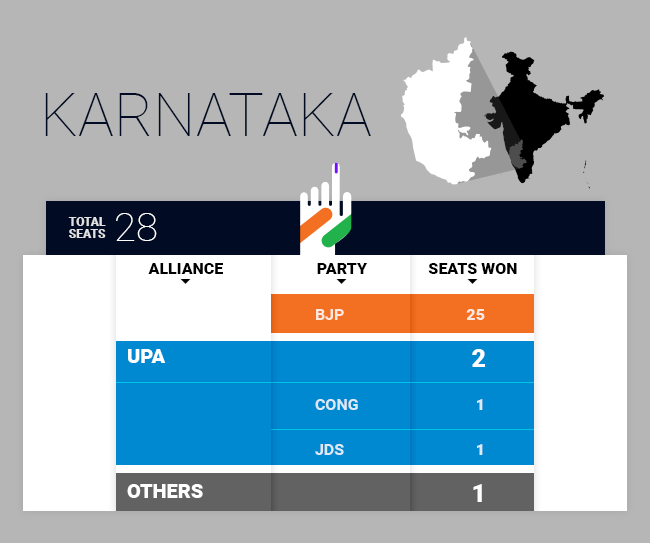 An Independent - multi-lingual south Indian film actor Sumlatha Ambareesh, backed by the BJP, won the prestigious Mandya seat, defeating JD-S debutant Nikhil Kumaraswamy, son of state Chief Minister HD Kumaraswamy and grandson of JD-S supremo and former Prime Minister HD Deve Gowda.
Speculation is rife in the political circles that any adverse results for the Congress-JD(S) alliance in the polls will have its implications on the longevity of the Kumaraswamy-led government in Karnataka.
BJP has predicted that the ruling coalition would collapse after the Lok Sabha poll results, claiming that 20 odd Congress MLAs are unhappy with the government and may take any decision after May 23.
Karnataka has also been the only southern state where the BJP is dominant in the parliamentary elections over the past 15 years, winning 18 seats in 2004, 19 in 2009, and 17 in 2014.
The 25 seats the BJP won are Bagalkot, Bangalore Central, Bangalore North, Bangalore South, Belgaum, Bellary (ST), Bidar, Bijapur (SC), Chamarajanagar (SC), Chikkaballapur, Chikkodi, Chitradurga (SC), Dharwad, Davanagere, Dakshina Kannada, Gulbarga (SC) Haveri, Kolar (SC) Koppal, Mysore, Raichur (ST), Shimoga, Tumkur, Udupi-Chikmagalur and Uttara Kannada.
In contrast, the Congress, which contested in 21 seats, lost even 8 of the 9 seats it had won in the 2014 general elections to only retain Bangalore Rural where its candidate DK Suresh defeated BJP's Ashwath Narayangowda by a margin of by 2,06,870 votes.
The JD-S too, which contested 7 seats under the pre-poll seat-sharing arrangement with its ally Congress, retained only Hassan, a party bastion and the home turf of the Gowda clan, and lost to the BJP in 6 seats.
Key Candidates
JD-S' Prajwal Revanna, son of state PWD Minister HD Revanna, and another grandson of Deve Gowda defeated A. Manju of the BJP by 1,41,324 votes.
Deve Gowda, who opted to contest from Tumkur to paving way for Prajwal to enter national politics through Hassan, however, lost to BJP's GS Basavaraj in Tumkur by a narrow margin of 13,339 votes.
Congress leader in the previous Lok Sabha Mallikarjun Kharge also lost to BJP's Umesh Jadav in the Gulbarga reserved seat by a margin of 95,452 votes.
BJP's first-time contestant and young turk Tejasvi Surya defeated Congress Rajya Sabha member BK Hariprasad in the high-profile Bangalore South by a whopping margin of 3,11,192 votes.
Among the prominent BJP winners are Union Ministers DV Sadananda Gowda from Bangalore North, Anantkumar Hegde (Uttara Kannada) and Ramesh Jigajinagi (Bijapur) and sitting members Pralhad Joshi (Dharwad), G.M. Siddeshwar (Davanagere), Shobha Karandlaje (Udupi-Chikmaglur), Pratap Simha (Mysore), Naleen Kumar Kateel (Dakshina Kannada) and B.Y. Raghavendra (Shimoga), son of the party's state unit president B.S. Yeddurappa, who was the party's first Chief Minister in south India from 2008-11.
Among other prominent losers of the Congress are former UPA ministers M Veerappa Moily (Chikkaballapur) and KM Muniyappa (Kolar) and state Panchayat Raj Minister Krishna Byre Gowda (Bangalore North).
(With inputs from agencies)
Catch all the Lok Sabha election live updates here.
Check out our in-depth Market Coverage, Business News & get real-time Stock Market Updates on CNBC-TV18. Also, Watch our channels CNBC-TV18, CNBC Awaaz and CNBC Bajar Live on-the-go!