Indian Air Force conducted a major strike on Jaish-e-Mohammed's biggest training camps early Tuesday, killing a large number of terrorists and trainers, said Indian foreign secretary Vijay Gokhale said. The strike was carried out after receiving credible information that JeM was planning more terror attacks in various parts of India. Pakistan claimed that there were no casualties. The Indian strike comes 12 days after Pakistan-based terror outfit JeM carried out a terror strike on a CRPF convoy in Pulwama region of Kashmir, killing 40 personnel. Here are the latest updates

Prime Minister Narendra Modi was up all night as he monitored the Indian Air Force operation to destroy a Jaish-e-Mohammed terror camp in Pakistan, relaxing only after all the pilots returned safely home, government sources said on Tuesday.

After congratulating all those involved in the operation around 4.30 am, he got busy with his daily routine as he prepared for a full day's schedule, including the meeting of the Cabinet Committee on Security at his residence around 10 am.

He then rushed to the Rashtrapati Bhawan, where President Ram Nath Kovind conferred the Gandhi Peace Prize for 2015-2018. Later, Modi flew to Rajasthan for a rally and returned to New Delhi to attend an ISKCON event.
"The prime minister did not sleep a wink all night and remained intimately involved in the operations," said one source, speaking on condition of anonymity.

Swaraj speaks to counterparts in US, China, Singapore, Bangladesh, Afghanistan

External Affairs Minister Sushma Swaraj Tuesday spoke to her counterparts in the US, China, Singapore, Bangladesh and Afghanistan and briefed them about the pre-dawn strike on the Jaish-e-Mohammed terrorist training camp in Pakistan, official sources said.
In her telephonic conversation with US Secretary of Mike Pompeo, Swaraj explained the reasons behind the strike and conveyed that the action was specifically targeted at the JeM camp.
She also spoke to Chinese Foreign Minister Wang Yi and apprised him about the "non-military, preemptive air strikes" , the sources said.
They said she also briefed her counterparts from Singapore, Bangladesh and Afghanistan on the strike.
Separately, the Foreign Secretary apprised the envoys of all major countries including from the United States, Russia, China, France and the United Kingdom, the sources said.

Pakistan Army confirmed that Indian fighter jets dropped "four bombs" during an operation on Tuesday but downplayed its significance, saying the Indian attack was repulsed and while going back the aircraft "jettisoned their payload."
Army spokesman Major General Asif Ghafoor also said Pakistan will "surprise" India with its response that will be in all domains including "diplomatic, political and military."
"Prime Minister Imran Khan told the army and people that get ready for any eventuality. Now it is time for India to wait for our response. We have decided. Wait for it," Ghafoor said.
His remarks came hours after India bombed and destroyed Jaish-e-Mohammed's (JeM) biggest training camp in Balakot in Pakistan's restive Khyber Pakhtunkhwa province, about 80-km from the Line of Control, early Tuesday, killing a "very large number" of terrorists, trainers and senior commanders.

Minister of State for External Affairs VK Singh on India strikes at JeM camp in Balakot: India had made it clear that terrorism must be eradicated, we had given many chances to Pakistan, therefore, India was forced to take action so that these things can be stopped. pic.twitter.com/ERow0LRnrN

EAM Sushma Swaraj after all party meeting: I am happy that all parties in one voice praised the security forces and supported the Govt's anti-terror operations pic.twitter.com/8dwP5V8tfe

Sources: In the all party meeting today EAM Sushma Swaraj informed the leaders that she spoke to US Secretary of State Michael Pompeo over the Indian air strikes on JeM terror camps in #Balakot (file pic) pic.twitter.com/C881EEq9m6

Residents in Pakistan's Balakot thought earthquake jolted them from sleep

Residents in the quake-prone Balakot town in Pakistan's Khyber-Pakhtunkhwa province  Tuesday said they were woken by "loud explosions" and thought a fresh tremor must have hit the region when Indian Air Force jets pounded a large terror training camp.
Balakot town in Pakistan's north-western Khyber Pakhtunkhwa province was destroyed during the 2005 Kashmir earthquake and was rebuilt with assistance from Saudi Arabia.
Residents in the mountainous area town told BBC Urdu they were woken by loud explosions.
Residents in several towns near Balakot reported hearing explosions early on Tuesday.
Mohammad Adil, a farmer in Jaba village, said he and his family were woken at about 03:00 by "a huge explosion".
He said they thought an earth quake must have hit the region.
"Then we heard jets flying over. We went to the place in the morning. There was a huge crater and four or five houses were destroyed," he said.

Ghulam Nabi Azad, Congress after all-party meet: We have appreciated the efforts by the forces, they always have our support to end terrorism. Another good thing is that it was a clean operation which specifically targeted terrorists and terror camps. pic.twitter.com/iZ4r5BMGD9

Punjab Chief Minister Captain Amarinder Singh: State is on alert, I will be touring bordering areas tomorrow. We are ready for any eventuality. I told the Union Home Minister that if there is anything that Punjab can do we are there to for the defence of our country. pic.twitter.com/js0SavJwfd

Amit Shah, BJP President at a public rally in Ghazipur: Surgical strikes after Uri and now air strikes in self-defence, both have given the message to the world that for the security of the country, India's soldiers and government can go to any extent. pic.twitter.com/lAoSsDxYEp

The Indian Air Force' strikes on terrorist camps in Pakistan underscores the will and resolve a new India, BJP president Amit Shah said Tuesday, asserting it has shown that the country is safe under Prime Minister Narendra Modi's strong and decisive leadership.
"I congratulate and salute the bravery and valour of our armed forces.
Today's action further demonstrates that India is safe and secure under the strong and decisive leadership of PM Nrendra Modi," he said.
"Our New India will not spare any acts of terror and their perpetrators and patrons," Shah added.

Any retaliation by Pakistan to India's air strikes on Jaish-e-Mohammed's terror camp in that
country will prove that it provides shelter to terrorists, NCP chief Sharad Pawar said on Tuesday.

It would not be proper to politicise the air strikes, Pawar said. Targeting Prime Minister Narendra Modi, he said the IAF had carried out such strikes earlier also, but there was no politicisation (of the same).

"The credit always went to the Army. Now if the credit is being given to Prime Minister Modi, then credit should also be given to RSS chief Mohan Bhagwat," he said.

The Jammu and Kashmir the Congress Tuesday congratulated the IAF for the "successful" air strikes across the Line of Control, asserting that the nation was "proud" of its armed forces.
"We congratulate the IAF for the successful pre-emptive air strike against terrorists camps in PoK. The nation feels proud of our armed forces," JKPCC Chief Spokesperson Ravinder Sharma said.
He saluted the valour of the Indian Air Force (IAF) pilots and said that they deserved all the praise for their brave action.
"The nation is united against terror and to protect its sovereignty," he said, adding that the Union government must deal firmly with Pakistan sponsored terrorism.
The strikes involving several fighter jets of the IAF successfully destroyed camps belonging to Pakistan-based terror outfits in Balakot in Khyber Pakhtunkhwa province.

#WATCH Chhattisgarh: ASI GD Ratnakar,211-BN CRPF on IAF strike at JeM camp in Balakot: Jawans are celebrating,they (Pak) have been given a befitting reply,but souls of 40 jawans isn't at peace yet,their souls will rest in peace only after mastermind of #PulwamaAttack is killed... pic.twitter.com/PkrEZm8ByO 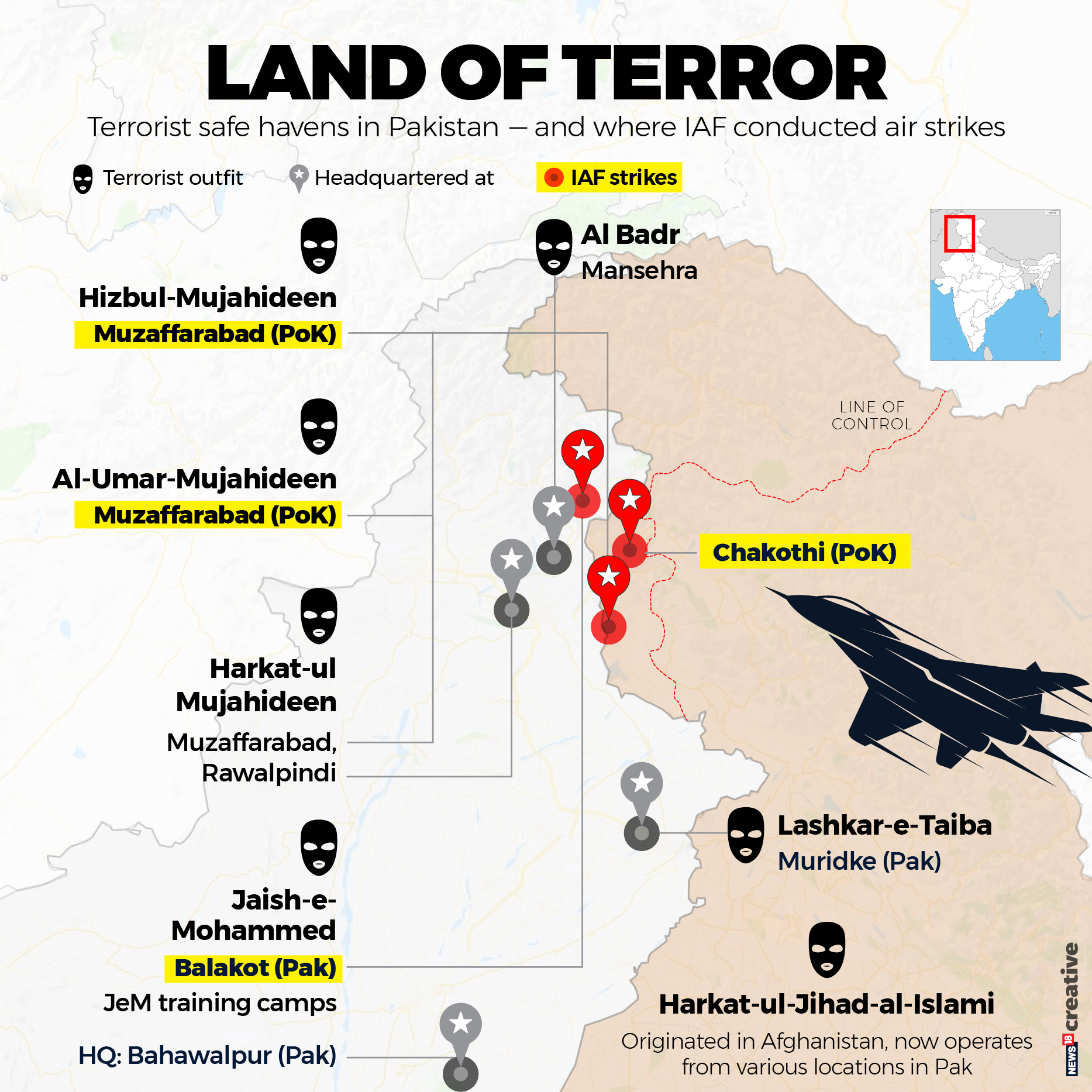 For all those looking at today’s air strikes through a political/electoral prism it might be worth remembering that PM Vajpayee went in to the 1999 elections with nuclear tests AND victory in Kargil under his belt & still only returned to power with a coalition.

Ram Madhav, BJP National General Secretary: After Pulwama attack, the nation was mourning for 12 days and on the 13th day our valiant Air-force paid the real tribute to the martyred soldiers by destroying terror training camps deep inside Pakistan territory. pic.twitter.com/xHrelORrkB

The Australian government on Tuesday said that it is concerned about relations between India and Pakistan.

Australia has asked Pakistan to take urgent and meaningful action against terrorist groups in its territory, the press release stated.

"Pakistan must do everything possible to implement its own proscription of Jaish-e-Mohammed. It can no longer allow extremist groups the legal and physical space to operate from its territory," the release added.

Australia has also urged both sides to exercise restraint and "avoid any action which would endanger peace and security in the region".

A Pakistani drone on a reconnaissance mission was shot down early this morning in Kutch area of Gujarat by the Indian Army using Israeli Spyder air defence missile system, sources said.

Punjab Chief Minister's Office: Punjab has put its border districts on high alert in the wake of the Indian Air Force's (IAF) strikes across the Line of Control, undertaken by India as a retaliatory measure in the aftermath of the Pulwama terror attack. (File pic of Punjab CM) pic.twitter.com/TyFRNiwdGt

Pakistan foreign minister Shah Mahmood Qureshi said international leadership will be engaged on Indian strike on its territory.  He was addressing a press conference in Islamabad, following a special meeting of the National Security Committee (NSC) convened by Pakistan prime minister Imran Khan in the wake of the Indian attack.

Villagers near the town of Balakot in northeast Pakistan were shaken out of their sleep by what seemed like an earthquake in the early hours of Tuesday, only discovering once dawn broke that there had been an Indian airstrike on their neighbourhood.

Indian officials said the raid destroyed a training camp of Jaish-e-Mohammed, the militant group behind a suicide attack in Kashmir that killed 40 members of a paramilitary police force on Feb. 14. India's foreign secretary said "a very large number of JEM terrorists" had been eliminated in what was the first Indian air strike on Pakistani territory since 1971.

The villagers, however, said only one person was wounded in the attack and they knew of no fatalities.