An exit poll of the 2019 general elections predicted major victory for Bharatiya Janata Party (BJP) in Karnataka, with the Narendra Modi-led party winning up to 23 seats in the southern state.

Voting in Karnataka's 28 constituencies was held in two phases on April 18 and April 23. Counting will be held on May 23.

BJP contested on 23 Lok Sabha seats, while Congress-JDS alliance had agreed to a 21-7 seat sharing in the state.

The 2014 general elections gave the BJP its best score from Karnataka. The BJP won 17 Lok Sabha seats and as much as 43 percent of the votes.

Apart from its traditional stronghold in the coastal region, the BJP swept all the seats in Urban Bengaluru. The elections to the state assembly in May 2018, then seemed, poised the BJP’s way.

Overall, the News18-Ipsos exit poll showed NDA securing 292-3112 seats beating the 62-72 seats by the Congress-led United Progressive Alliance, a coalition of opposition parties. The tally of the Congress, which won 44 seats in 2014 — its worst-ever electoral performance — is projected to slide further to 32-37 seats. 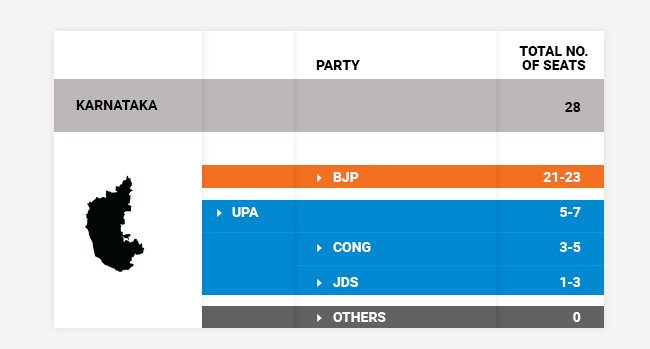