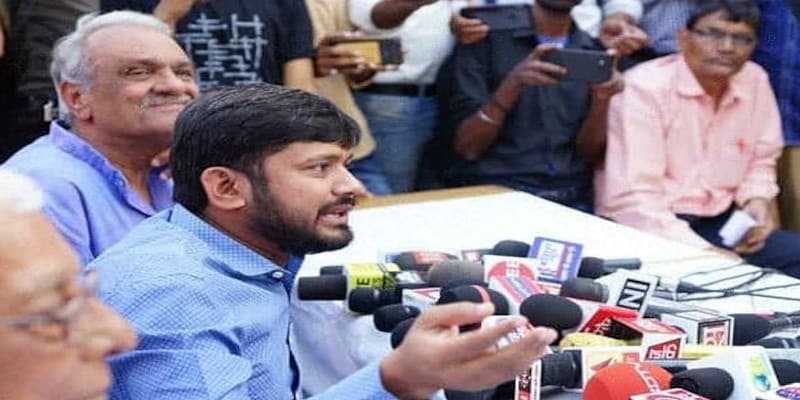 Kanhaiya Kumar and Jignesh Mevani joined the Congress party on Tuesday in presence of Rahul Gandhi.

Gujarat MLA and Dalit leader Jignesh Mevani too extended his support to the Congress ideology and said he would contest the next assembly polls on the Congress symbol.
Asserting that it is detrimental to a country's interests if the Opposition is weakened as those in power become authoritarian, Kumar, who quit the Communist Party of India (CPI), described the Congress party as a "big ship" and said the small boats will survive only when the Congress is saved. "I have decided to join the country's oldest and most democratic party because I feel along with the lakhs of youths that if the Congress is not saved, the country will not be saved," he said.
Mevani said he is not joining the Congress due to "technical reasons" as he is still an independent MLA, but announced that he will contest the next Gujarat election on the Congress symbol and will participate in all Congress activities and campaign for the 2022 Gujarat assembly polls. "My foremost responsibility is to save our Constitution, our democracy and our Idea of India, as they are all under attack today. I will fight with Congress symbol in 2022 and will participate in all Congress campaigns," he said.
Kumar had joined the Communist Party of India (CPI) ahead of the 2019 Lok Sabha election and had unsuccessfully contested from Begusarai in Bihar against Giriraj Singh of the Bharatiya Janata Party.
Kumar and Mevani meet Congress leader Rahul Gandhi at Shaheed-E-Azam Bhagat Singh Park in the national capital ahead of the formal joining. The leaders paid tribute to freedom fighter Bhagat Singh on his birth anniversary.

Also read | View: Congress is the new Left in today's India
Mevani, who is currently a legislator in Gujarat and represents the Vadgam constituency, is the convener of the Rashtriya Dalit Adhikar Manch (RDAM). He is a lawyer-activist and a former journalist.
Mty. Also, Gujarat is scheduled to hold elections in December 2022.evani's entry into the Congress comes at a time when it is wooing the scheduled castes communi
Also read | As Congress veers to the Left with Kanhaiya Kumar’s entry, insiders urge course correction to the Centre
"We, youngsters, want to work in Congress, under a leader who talks about development and prosperity. We've raised voice for people of the country in past, want to strengthen them and be their voice," said Hardik Patel, Gujarat Congress Working President, on the joining of Kumar and Mevani to the Congress.
(With inputs from PTI)
(Edited by : Aditi Gautam)
Check out our in-depth Market Coverage, Business News & get real-time Stock Market Updates on CNBC-TV18. Also, Watch our channels CNBC-TV18, CNBC Awaaz and CNBC Bajar Live on-the-go!