Updated : December 24, 2019 07:16 AM IST
Hemant Soren’s JMM emerged as the single largest party in the state election bagging 30 seats with 18.7 percent vote share.
The BJP won 25 seats but had the highest vote share of 33.4 percent. The Congress also managed to increase its tally to 16 seats.

The opposition alliance of Jharkhand Mukti Morcha, Congress and Rashtriya Janata Dal defeated the ruling Bharatiya Janata Party in Jharkhand, winning 47 of the 81 Assembly seats. For the Narendra Modi-led BJP, this was the yet another defeat in the Hindi heartland after Madhya Pradesh, Chhattisgarh and Rajasthan.

Hemant Soren’s JMM emerged as the single largest party in the state election bagging 30 seats with 18.7 percent vote share, according to the final tally of the Election Commission. The BJP won 25 seats but had the highest vote share of 33.4 percent. The Congress also managed to increase its tally to 16 seats. 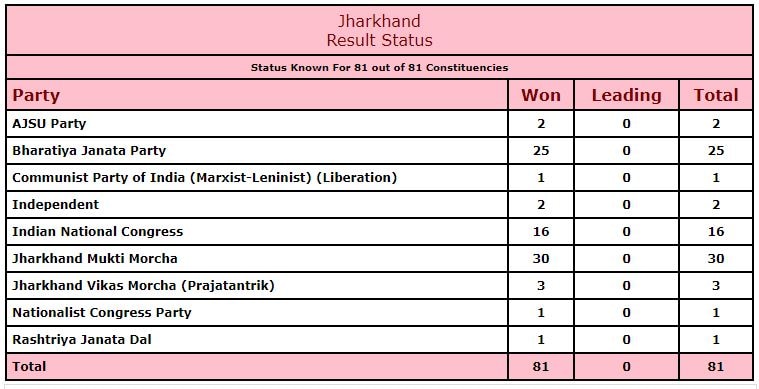 Outgoing CM Raghubar Das lost his bastion, Jamshedpur East, by his Independent rival and former cabinet colleague Saryu Roy by a margin of 15,833 votes. Das, who had held the seat since 1995, secured 58,112 votes while Roy got 73,945 of the total 173,618 votes. Congress candidate Gourav Vallabh came third with 18,976 votes. Das tendered his resignation and accepted defeat. "I met Governor Droupadi Murmu and submitted my resignation. The governor asked me to be caretaker CM till the new government is formed," he told reporters outside Raj Bhavan, with defeat staring him in the face in his pocket borough of Jamshedpur (East) seat.

Roy, a former state minister, had thrown his hat into the ring after being denied a ticket to contest the adjoining Jamshedpur (west) seat. The poll outcome has endorsed Hemant Soren, the JMM's working president, as not only the inheritor of his father Shibu Soren's legacy as the foremost tribal leader of the state, but also expressly manifested the electorate's backing for an adivasi at the helm of the state's affairs.

Home Minister Amit Shah had made a strong pitch in its support.

However, the state, with a substantial Muslim population, seemed to have rejected the CAA as also the idea of a nation-wide National Register of Citizens (NRC). A spate of incidents of lynching of Muslims over suspicion of cattle theft is likely to have caused a polarisation of Muslim votes against the current dispensation that went against the BJP.

Moreover, the BJP's failure to carry forward its alliance with Sudesh Mahato's AJSU Party also appeared to have cost it dearly. Mahatos are a sub-caste of OBC Kurmis, which have a significant presence in both Bihar and Jharkhand.

The BJP, which had posted a spectacular victory in the Lok Sabha election in the middle of the year, was yet to score a convincing triumph in an assembly election since.

In the two assembly elections held after the Lok Sabha polls, the party failed to win a clear majority in Haryana, where it had to ally with Dushyant Chautala's Jannayak Janta Party to cobble together a government.