Abrogation of Article 370: It is now time to bridge trust deficit in Kashmir Read more

Abrogation of Article 370: These are the legal hurdles the govt could face Read more

Here's how India reacted to the government’s proposal to scrap Article 370, 35A in Jammu and Kashmir See pics

Delhi: Parliament illuminated after Article 370 & 35A were passed in the Rajya Sabha today. #JammuAndKashmir pic.twitter.com/W3xsjO9xz2

Home Minister @AmitShah Ji’s speech in the Rajya Sabha was extensive and insightful. It accurately highlighted the monumental injustices of the past and coherently presented our vision for the sisters and brothers of J&K. Do hear. https://t.co/ho7PPzyz5w

Sources: Senior officials of Ministry of External Affairs are briefing envoys of several countries, including P5 (China,France,Russia, UK&US), on proposals related to Article 370 of Indian Constitution&administrative reorganization of J&K that were introduced in Parliament today. pic.twitter.com/A5h4tAXSTa

According to sources, PDP president Mehbooba Mufti has been taken into custody and shifted to Hari Niwas guest house.

Amit Shah in Rajya Sabha: Several MPs have asked how long will J&K remain a Union Territory- I want to assure them when situation gets normal & the right time comes, we're ready to make J&K a state again. It may take a little longer, but it will become a state once again, one day pic.twitter.com/obORN7lm4R

Rajya Sabha has passed the Jammu and Kashmir Reorganisation Bill.

HM: You stand here in Parliament and say bloodshed will happen in Kashmir..what message are you sending to the valley? You want them to continue living in 18th century system,don't ppl there hv right to live in 21st century?Those who provoke have kids studying in London and US pic.twitter.com/N4ST8NPKLJ

"No unilateral step by the Government of India can change this disputed status, as enshrined in the United Nations Security Council (UNSC) resolutions," read the statement, as quoted by Pakistan daily Dawn. "The decision will never be acceptable to the people of IoK and Pakistan.

"As the party to this international dispute, Pakistan will exercise all possible options to counter the illegal steps," the statement added. 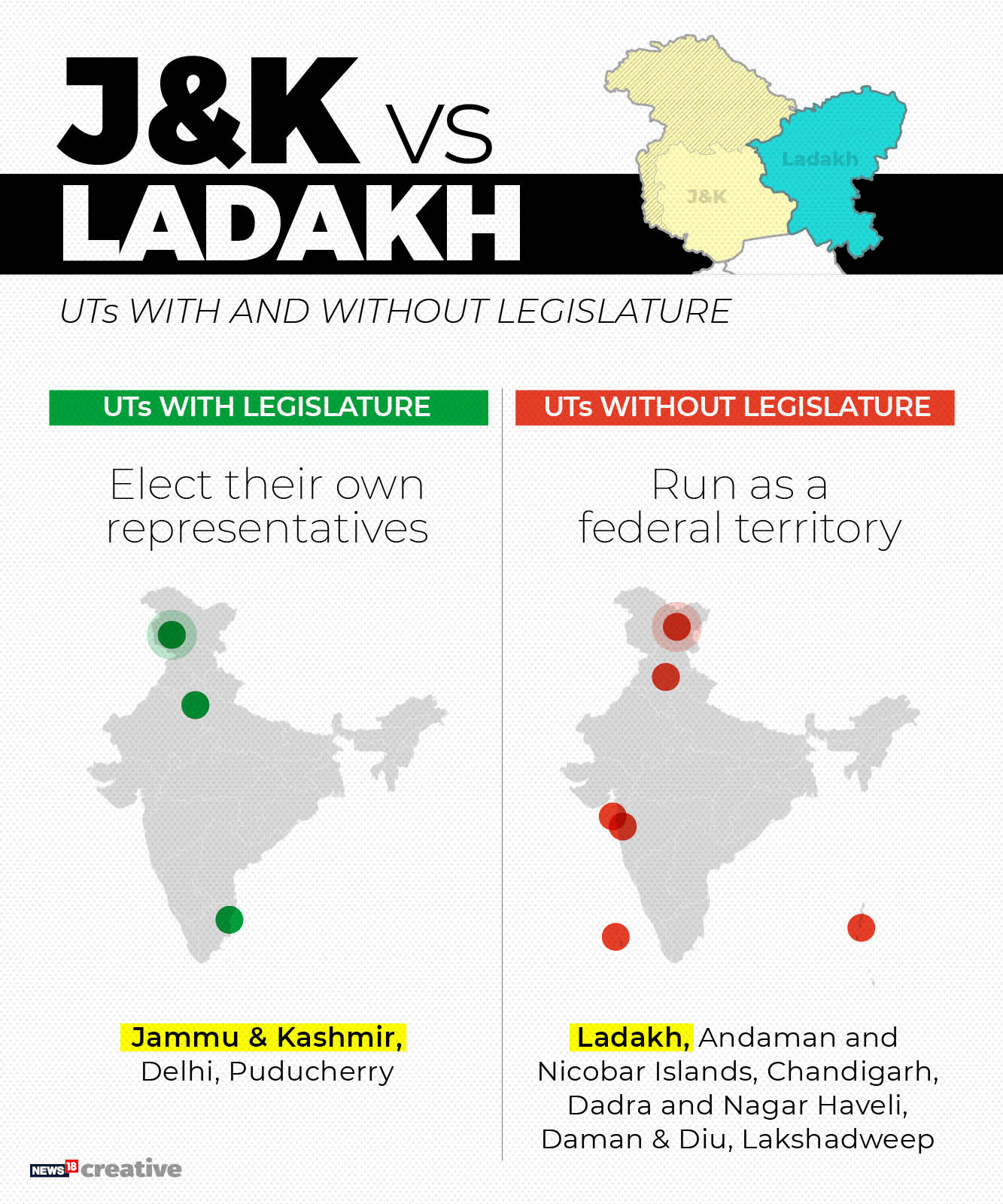 The difference between states and union territories FM Nirmala Sitharaman: It is something the country has been waiting for the last 70 years. Even our manifesto mentioned the need to abrogate #Article370, so it is not something we brought out suddenly like a rabbit from a magic hat. pic.twitter.com/bcZAE3JL89

US issues security alert to its citizens in J&K

The US citizens currently in Jammu and Kashmir were strongly advised to leave as soon as possible and to exercise great caution until they depart. “Communications to the region, including by phone, text, and e-mail, may be unreliable at this time,” it read.

P Chidambaram,Congress in Rajya Sabha: Momentarily you may think you have scored a victory, but you are wrong and history will prove you to be wrong. Future generations will realize what a grave mistake this house is making today. #Article370 pic.twitter.com/NC3XrFeeU5

Resolution on Article 370 gets support from regional parties

NSA Ajit Doval is expected to visit Kashmir valley today along with other senior security officials to review the situation on ground, reported ANI. NSA Doval had earlier visited Srinagar in last week of July before the implementation of decision to revoke Article 370.

What may change for Jammu and Kashmir Pakistan said on Monday it "strongly condemns" India's decision to revoke the special status for its portion of the Kashmir region claimed by both countries.

India on Monday revoked the special status of Kashmir in a bid to fully integrate its only Muslim-majority region with the rest of the country, the most far-reaching political move on the troubled Himalayan territory in nearly seven decades.

"As the party to this international dispute, Pakistan will exercise all possible options to counter the illegal steps," Pakistan's foreign ministry said in a statement.

Union Home ministry has directed all Central Armed Police Forces (CAPFs) and central security agencies to take "necessary precautions" and step up protection of their campuses and movements by issuing specific advisories. "An advisory for remaining on a high alert mode has been issued to all the security forces across the country, especially for their units based in Jammu and Kashmir," a senior official said.

The Ministry of Home Affairs (MHA) alert is based on general inputs analysed after any important event. The latest directive came after the government abolished Article 370 that gives special status on Jammu and Kashmir and also in view of the upcoming Independence Day celebrations.

Terming the revoking of Article 370 a "catastrophic step", the Congress accused the BJP of taking the decision "for votes" and said it marks a "black day" in the constitutional history of India.

Senior Congress leader and former home minister P Chidambaram said, "We anticipated a misadventure, but did not think in our wildest dreams that they will take such a catastrophic step." "Today is a black day in the constitutional history of India," he said outside Parliament.

Senior Congress leader Ghulam Nabi Azad accused the BJP of taking the decision "for votes". He also alleged that the party is playing with unity and integrity of the state. Omar Abdullah on govt's decision on Article 370, Article 35A

"Government of India (GOI)'s unilateral and shocking decisions today are a total betrayal of the trust that the people of Jammu & Kashmir had reposed in India when the state acceded to it in 1947. The decisions will have far-reaching and dangerous consequences. This is an aggression against people of the State as had been warned by an all-parties meeting in Srinagar yesterday."

"GOI has resorted to deceit and stealth in recent weeks to lay the ground for these disastrous decisions. Our darkest apprehensions have unfortunately come true after the GOI and its representatives in J&K lied to us that nothing major was planned," he said.

"Those of us who gave democratic voice to the people of Jammu & Kashmir, are incarcerated as lakhs of armed security personnel have been put on the ground."

"The scrapping of Articles 370 and 35A raise fundamental questions on the state's accession because that was done on the very terms enunciated in these articles. The decisions are unilateral, illegal and unconstitutional and will be challenged as such by the National Conference . A long and tough battle lies ahead. We are ready for that," he said.

Yuva Sena chief Aaditya Thackeray dubbing it as a "moment of pride" and a "historic day" for the country. "Historic day for India. 370 scrapped and Jammu & Kashmir now truly a part of India. The path to a safer, progressive and an open J&K determined by citizens, and not anti-national separatists has been paved," he said in a tweet.

He said this was why the Shiv Sena, led by his father Uddhav Thackeray, supported the NDA in the Lok Sabha polls held earlier this year.

"This is a moment of pride...Big congratulations to @PMOIndia @narendramodi ji, Home Minister @AmitShah ji, the Parliament & the Citizens of India. This is exactly why we supported the NDA in Lok Sabha 2019 led by Modi ji. Decision for India and the State of J and K," the Yuva Sena chief said.

"I pray that now with the reorganisation of Jammu, Kashmir and Ladakh, the citizens there will benefit with peace, progress and prosperity, which was being held back from them for years due to its isolation from the rest of the country," he said in another tweet.

The Indian Army and Indian Air Force have been put on high alert after the government has proposed revoking Articles 370 and 35A related to the state of Jammu and Kashmir.

AAP chief and Delhi CM Arvind Kejariwal said, “We support the government’s move on J&K. We hope this will bring peace and development in the state.”

“We are ready for a long battle,” says Omar Abdullah

* "Long and tough battle lies ahead, we are ready for that"

* "Govt resorted to deceit, stealth in recent weeks to lay ground for these disastrous decisions"

* "Unilateral decision by govt, a total betrayal of trust"

How did Article 35A come about?

A 1927 order by the administration of the state of Jammu and Kashmir gave the state's subjects exclusive hereditary rights. Two months after India won independence from British rule in August 1947, Maharaja Hari Singh, the then-ruler of Jammu and Kashmir, signed a Treaty of Accession for the state to join the rest of the union, formalised in Article 370 of the Indian constitution.

Further discussions culminated in the 1952 Delhi Agreement, a presidential order that extended Indian citizenship to the residents of the state but left the maharaja's privileges for residents intact. (AP)

I have always believed that #Article370 should be abolished - it's existence was a result of unfortunate politicization of the #Kashmir Valley.
I support the @BJP on this decisive move. Also, glad to see them deliver on their election manifesto. @AmitShah @narendramodi @PMOIndia https://t.co/mZm1iW0TJp