Updated : December 30, 2019 11:30 AM IST
The sit-in protest at Shaheen Bagh — in the biting Delhi cold — has been underway for two weeks.
The protests began on December 15 when police unleashed a wave of violence and brutality at the Jamia Millia Islamia (JMI) campus.
Aasif Mujtaba, 30, and Sharjeel, 31, alumni of the Indian Institute of Technology (IIT), are the organisers of the agitation.

Tens of thousands of Indians have taken to the streets in recent weeks to protest the contentious citizenship law. Some of the nationwide protests have been marred by instances of violence and caused at least 25 deaths, mostly in Uttar Pradesh.

But in a neighbourhood in New Delhi, the demonstration against the Citizenship Amendment Act has been completely peaceful. The sit-in protest at Shaheen Bagh — in the biting Delhi cold — has been underway for two weeks. Every day, people of this locality gather at a kilometer-long busy stretch of highway that connects Delhi with Noida.

Traffic on this stretch of road is usually chock-a-block with vehicles during most hours of the day. An estimated 100,000 vehicles pass through that six-lane stretch every day. But these days, a sea of people has replaced the vehicles. The protesters are determined in their opposition to the citizenship law; even the fall in temperature to 1.5 degrees Celsius has failed to dissuade them.

The protests began on December 15 when police unleashed a wave of violence and brutality at the Jamia Millia Islamia (JMI) campus. Residents of Shaheen Bagh and the neighbourhood gathered at the road in support of the Jamia students.

The trigger of the demonstration was the police attack on students but residents are enraged at the law that fast-tracks the citizenship applications of Hindus, Christians, Sikhs, Jains, Parsis, and Buddhists from Pakistan, Afghanistan, and Bangladesh but explicitly excludes Muslims. They are upset at what they believe is an affront to the Indian constitution.

Aasif Mujtaba, 30, and Sharjeel, 31, alumni of the Indian Institute of Technology (IIT), are the organisers of the agitation. The duo are the ideological fount of the round-the-clock demonstration, but the protests have been sustained by concerned citizens ranging from working professionals to daily wage labourers as well as students and homemakers. The retired too have joined the protests. 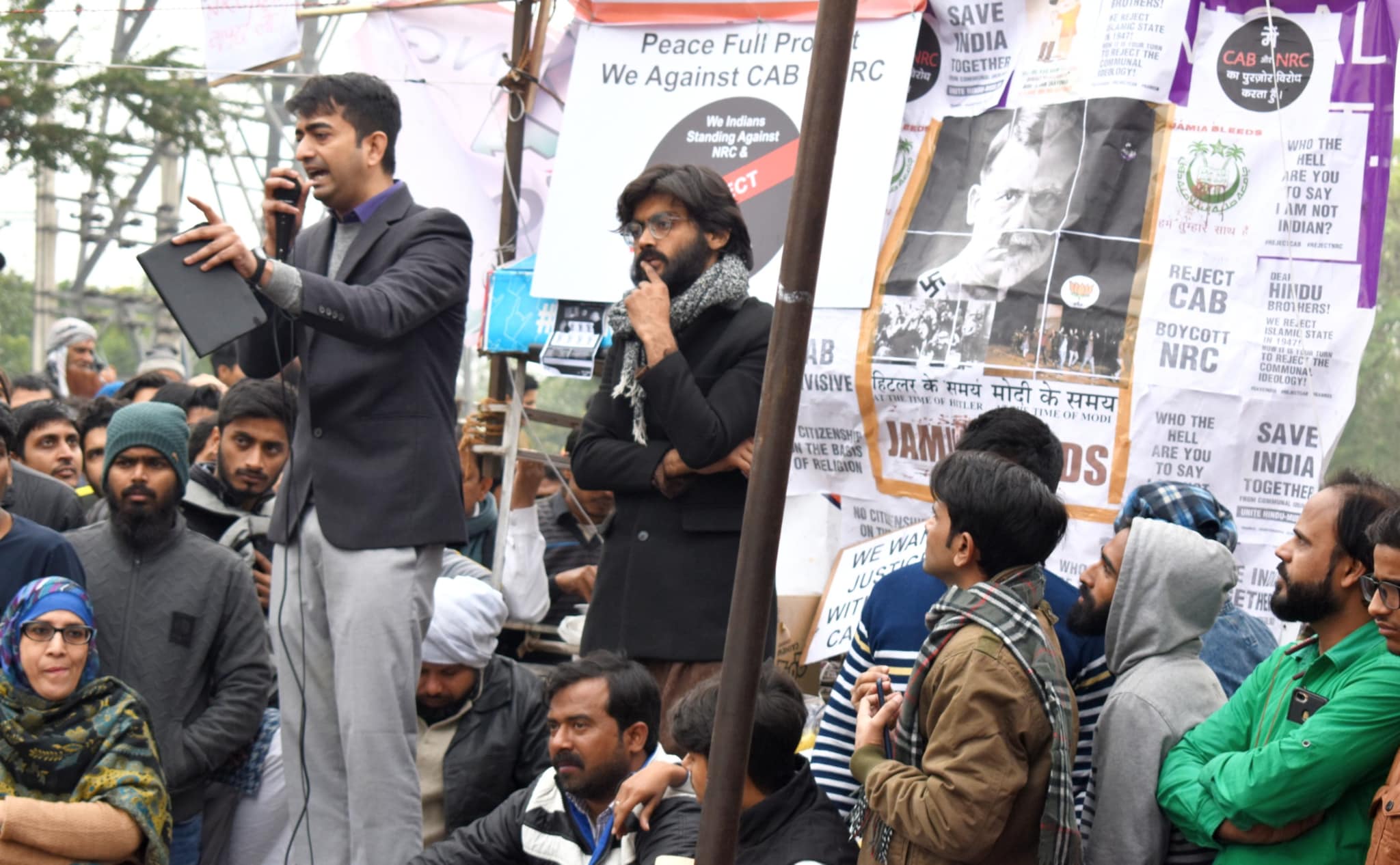 Siddharth Saxena, an accountant who is in charge of funds at the protest, said all contributions go in ensuring food and other supplies like posters and banners. Saxena said he has been blocked by many of his friends for his association with the protest but his belief in the cause keeps him going.

Mohammed Sayeedullah, a private sector employee, is diligent with his presence every day, reaching the site around 11 pm. He stays until the wee hours of the morning before heading home. Anwar (name changed), a shopkeeper, said he opens his shop later than usual to ensure his presence at the protest.

The bedrock of the agitation is women, who occupy the frontlines. Sitting under a thin tarpaulin, they zealously chant inquilab zindabad through the day. A continuous supply of hot tea helps for what it is worth against the cold.

The crowd is sparse in the mornings. The numbers swell in the afternoon and peak in the evening. While the first week mostly saw participation from the locals, people from afar, cutting across religious lines, have come out in support in the recent days. 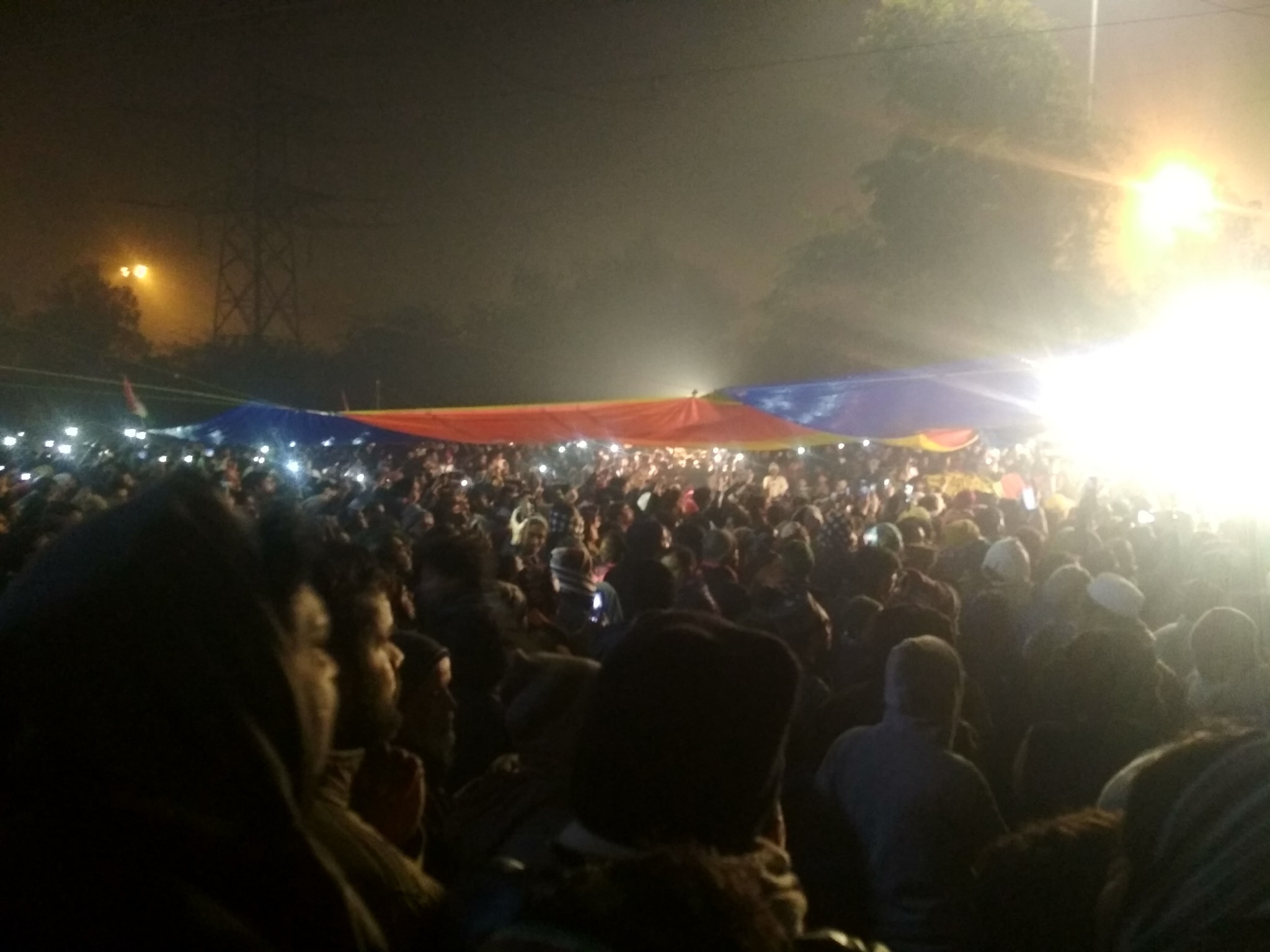 On December 28, Amrit Kaur, a Faridabad resident, took to the stage to offer her support as a Sikh to the protesters. The night before I met Divya (name changed), a Washington DC-based economist who has joined the protests.

Anish, a history teacher, said the Shaheen Bagh agitation is an inspiration for fighting against a theory that India rejected in 1947. Manishikha, a performing artist, called the protest unique because it was led by women. “It is important for everyone to exactly do this beyond the street because India is going through a very, very hard time.”

Aanchal Khulbe, another protestor, said the CAA is unconstitutional and police brutality unleashed in mostly Muslim-majority localities was unacceptable. “When we have no power, our voices are our only weapons,” she said.

All these participants are provided with food prepared at a community kitchen that runs with contribution from locals. “No one goes hungry from Shaheen Bagh” has become a common refrain.

In an interview, Mujtaba said the idea for the blockade was floated by some Shaheen Bagh residents and his friends from various universities after they saw the indiscriminate beatings of Jamia students.

Sharjeel, who preferred to use only his first name for this article, said the protest took shape organically and is completely decentralised. “You ask the locals for food, water, mattresses, and you get it all from them,” he said. “Scholars from prestigious Indian institutes are sitting in the protest and milling with the people.”

As I approached Sharjeel for an interview, he was talking to a group of medical undergraduates enquiring about possible volunteering opportunities for the protests. Mujtaba said the protest runs smoothly with the help of volunteers who are in charge of various departments, including security of the perimeter, food, and medical supplies.

On the stated aim of the agitation, Sharjeel said their demand is for the government to revoke the law. “We have tried to create a mini economic blockade by disrupting Delhi-Noida traffic to cause economic loss and force a rethink over this anti-Constitutional law.” He added that similar agitations across the country would bring economic activity to a complete halt and force the government’s hand on the issue.

Sharjeel and Mujtaba, both research scholars, take to the stage several times in a day to implore the protesters to maintain their calm against the police no matter how violent the situation turns. They try to lift their spirits with stories from history, recite couplets, and educate people about the implications of the new law.

Several of the protesters believe they have joined a larger cause — a fight for their very existence. Nasrullah, a civil engineer, said Muslims in India have been left with no other option.

Mujtaba said the protests are a pent-up outpouring of support from Muslims, who have long been feeling persecuted in India. “The pressure has been built for years,” he said. “When you lose faith in the legislation and judiciary, where will you go? It has now become a question of existence.”

Not everyone is happy

Not everyone is pleased with the agitation. Authorities are losing substantial revenues due to the closure of the toll gate at the Delhi-Noida border and shop owners, whose outlets that line one side of the highway on the Kalindi Kunj road are upset about the loss of business.

But their attempts to scare the protesters with the threat of imminent police action have had little effect.
Tags Anti-CAA protests Citizenship Amendment Act Delhi NPR NRC
Published : December 30, 2019 10:11 AM IST