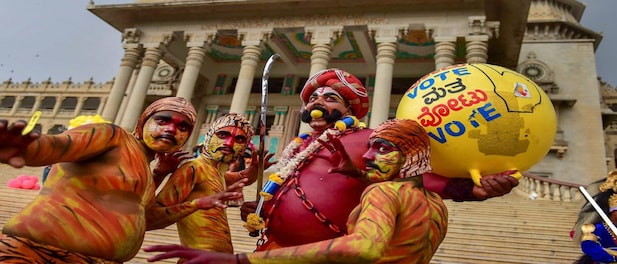 A high-voltage, high-decibel campaign, often turning bitter and personal, for the May 12 Karnataka Assembly elections, billed as the quarterfinal before the 2019 Lok Sabha polls with huge stakes for both BJP and Congress, ended Thursday evening amidst predictions of a close fight and a hung Assembly.

Leaders of the three main contending parties — ruling Congress, BJP and Janata Dal-Secular (JD-S) — including Prime Minister Narendra Modi, Congress President Rahul Gandhi, Chief Minister Siddaramaiah and former Prime Minister H D Deve Gowda, who had invested heavily in the month-long campaign, held road shows and press conferences to wind up the mass contact programme of wooing the electorate.
Earlier in the day, Modi, who adddressed more than 20 meetings in the last 10 days to boost his party's campaign, gave a final push by addressing the Scheduled Castes (SC), Scheduled Tribes (ST), and Other Backward Caste (OBC) party cadres from the poll-bound state through his Narendra Modi mobile app.
Braving the summer heat and dust, hundreds of contestants, cadres, supporters of national, regional, state and fringe parties raced against time to reach voters for their valuable ballot on the D-day — Saturday.
Polling will be held in 223 constituencies as election to the Jayanagar constituency in south Bengaluru has been countermanded due to the death of Bharatiya Janata Party (BJP) candidate BN Vijaya Kumar on May 4.
The Karnataka elections will be followed by polls in Madhya Pradesh, Rajasthan and Chhattisgarh this year end in what is expected to be an indicator of the things to come in the parliament election in the summer of 2019.
On the last day of electioneering, Gandhi addressed the media and held road shows at Hubballi, while BJP President Amit Shah campaigned in Badami in Bagalkot district from where Siddaramaiah is contesting from second seat.
The Congress chief toured across the districts of Kolar, Chikkaballapur, Tumakuru and Bengaluru in his last leg of campaigning over the last three days.
Gandhi's extensive campaign over the last few months across the state included several corner meetings, public rallies, road shows, dining at public eateries with the locals, visits to prominent religious institutions and riding a busy metro in the capital city etc.
The party's former president and Gandhi's mother Sonia Gandhi addressed a lone public meeting in Vijayapura district on Tuesday after Modi addressed a meeting on the same day.
The ruling Congress also flew in the former prime minister Manmohan Singh, former Finance Minister P Chidambaram among several other campaigners to further the party's winning prospects at the hustings.
Since May 1, the Prime Minister addressed a whopping 21 rallies within a span of six days across the districts of Chamarajanagar, Udupi, Ballari, Shivamogga, Raichur, Dharwad, Bengaluru among few others.
During the days that the Prime Minister wasn't in the southern state, he made use of technology to connect with the party's cadres through his personal mobile app.
The opposition BJP also brought in a slew of Union Ministers including Smriti Irani (Information and Broadcasting), Nirmala Sitharaman (Defence), Ravi Shankar Prasad (Law and Justice), Piyush Goyal (Railways) to interact with theAsouthern state's electorate and pitch for the party's attempt to return to power.
Uttar Pradesh Chief Minister Yogi Adityanath and Madhya Pradesh Chief Minister Shivraj Singh Chouhan also made several visits to the state.
The BJP, which came to power on its own for the first time in Karnataka in 2008 but lost to the Congress after five years in the May 2013 assembly election, hopes to make a foray into the south again ahead of the Lok Sabha polls. The party hopes to make up its possible losses in the north where it had peaked four years ago.
The JD-S cadres led by party leader Deve Gowda and his son and state President H.D. Kumaraswamy held several road shows and rallies across the state since the election was announced on March 27.
The party also had Bahujan Samaj Party (BSP) leader Mayawati appealing to Karnataka's electorate to dismiss both Congress and BJP in BSP-JD-S rallies held in Bidar and Bengaluru. Both the parties have tied up for contesting in the southern state's election.
In all, 2,654 candidates are in fray for the ensuing election on Saturday to elect the state's 15th Legislative Assembly.
Of the total candidates in fray, including 219 women, 222 are from the ruling Congress, 223 from BJP, 201 from Janata Dal-Secular (JD-S), 1,155 Independents and 800 from other national, regional and fringe parties, according to the poll panel.
The state capital and tech hub Bengaluru, which alone has 28 Assembly segments of the state's total 224 constituencies, has a total of 449 candidates in the fray. Of them, 37 are women and 412 men. Voting will be held across 27 of the tech hub's Assembly segments, after the election in Jayanagar was countermanded.
A single phase polling will be held for the 223 constituencies, including 36 reserved for the Scheduled Castes (SCs) and 15 for Scheduled Tribes (STs). The votes will be counted on May 15.
Check out our in-depth Market Coverage, Business News & get real-time Stock Market Updates on CNBC-TV18. Also, Watch our channels CNBC-TV18, CNBC Awaaz and CNBC Bajar Live on-the-go!