Jannayak Janata Party (JJP)'s Dushyant Chautala has emerged as the kingmaker in the Haryana Assembly election as the incumbent Bharatiya Janta Party (BJP) and the Congress seem unlikely to secure a majority.

Jannayak Janata Party (JJP)'s Dushyant Chautala has emerged as the kingmaker in the Haryana Assembly election as the incumbent Bharatiya Janta Party (BJP) and the Congress seem unlikely to secure a majority.

At 3 pm, the BJP was leading on 39 seats, the Congress 30 while the JJP was had established a lead in 11 constituencies. If the trend holds, the JJP will have the numbers to tip the scale one way or the other. There are 90 members in the Haryana Assembly.
Chautala has registered a comprehensive win in the Uchana Kalan constituency, garnering close to 60 percent of the votes. He finished well ahead of the BJP's Prem Lata and the Congress' Bal Ram. 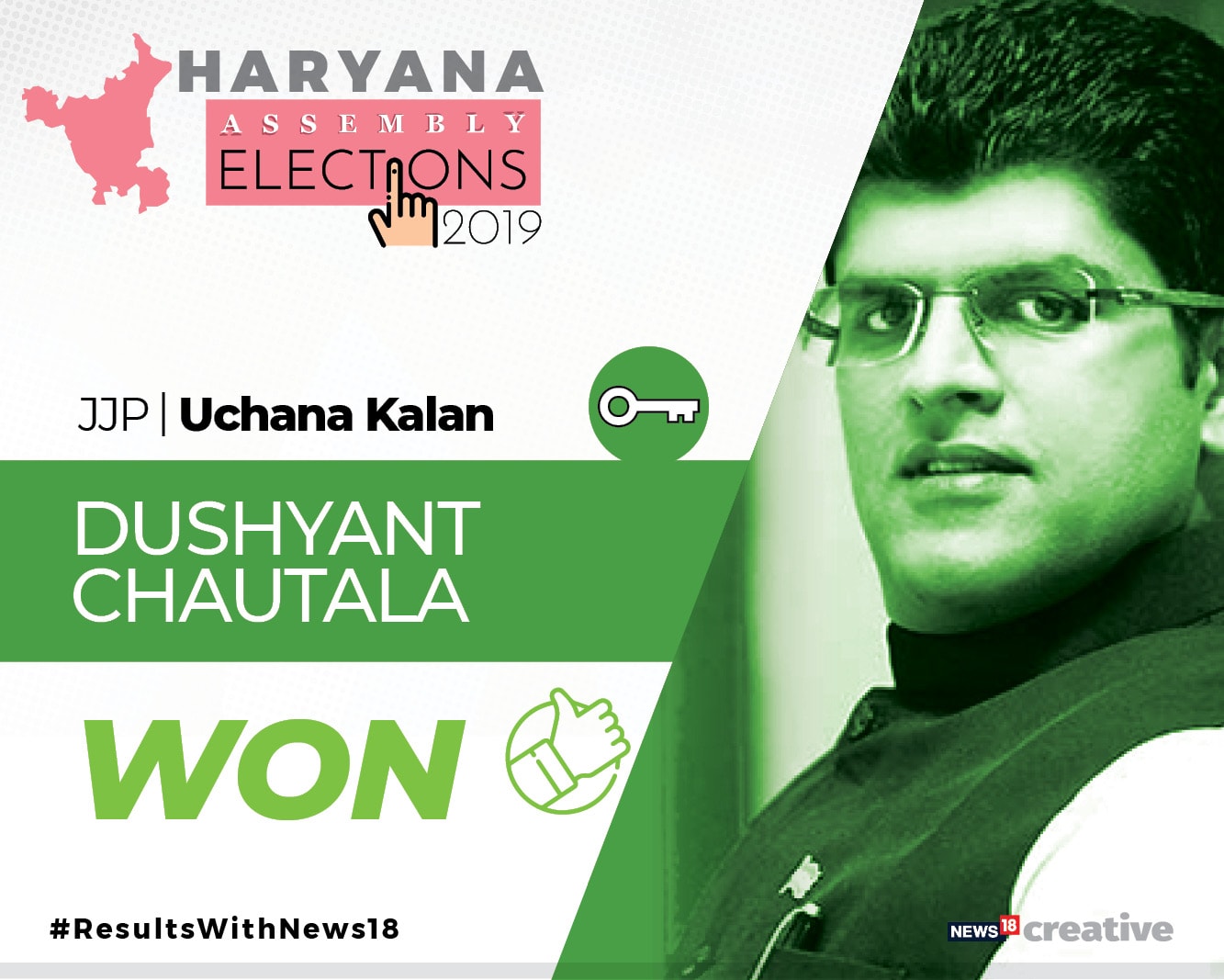 The Congress has already reached out to the JJP trying to stitch an alliance. But people aware of the development have told News 18 that Chautala has not given any assurances.
The JJP founder-chief is waiting for the final count. He has said it's too early to decide. Meanwhile, the Congress is wary of the BJP taking JJP into its fold as the saffron party is also trying to reach out to the newly-formed party.
>> Is Dushyant Chautala rising force in Haryana?
On the topic of the JJP aligning with the Congress or the BJP, Chautala said that he is yet to make a decision and will decide upon the future course of action only after a meeting with his party MLAs.
Talking to News18 Haryana, Chautala said: "I have not spoken to any party, regarding government formation with the BJP or Congress."
He added: "I cannot decide on this alone ... will only be able to talk about it after the national executive meet . I have not spoken to anyone on it."
In case the BJP falls short of a majority in Haryana, party leaders insist they must rope in former Punjab chief minister Prakash Singh Badal to mediate between with JJP.
>> Follow CNBC-TV18's full election coverage here
The Congress has denied reports saying the party had offered the chief minister's post to Chautala if the two parties form an alliance in Haryana.
The JJP came into existence after a split last year in the Indian National Lok Dal. Most exit polls predict that the INLD, founded by former deputy prime minister Devi Lal, would be decimated in the state.
Chautala's greatgrand father Devi Lal and Badals have close family ties. 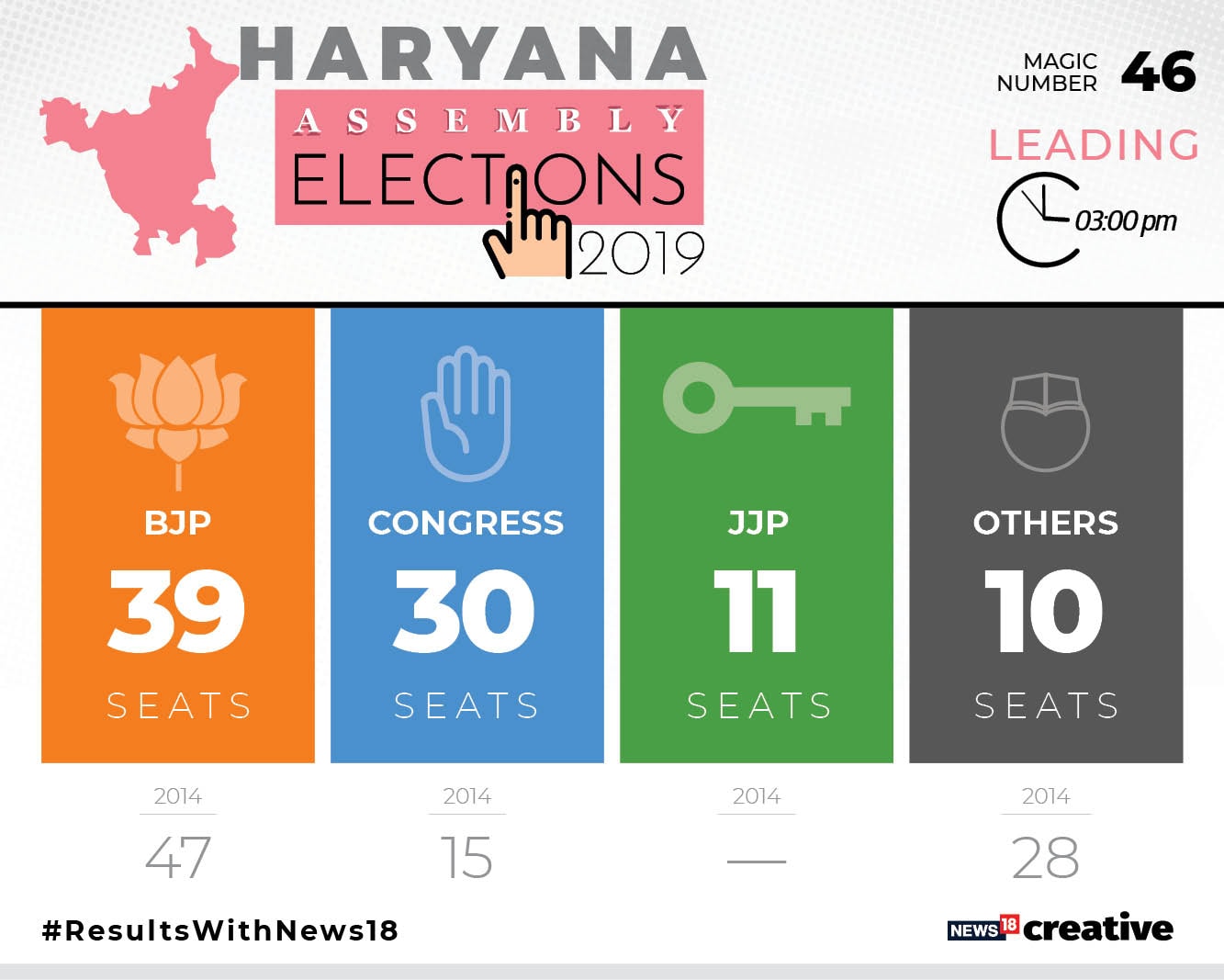 Haryana had on Monday recorded a voter turnout of over 68 percent, a sharp decline from 76.54 in the 2014 assembly polls. In 2014, the BJP had won 47 seats and the Congress 15, with two Haryana Janhit Congress legislators later merging with it.
>> Haryana headed for a hung Assembly with JJP playing kingmaker - follow live
Check out our in-depth Market Coverage, Business News & get real-time Stock Market Updates on CNBC-TV18. Also, Watch our channels CNBC-TV18, CNBC Awaaz and CNBC Bajar Live on-the-go!