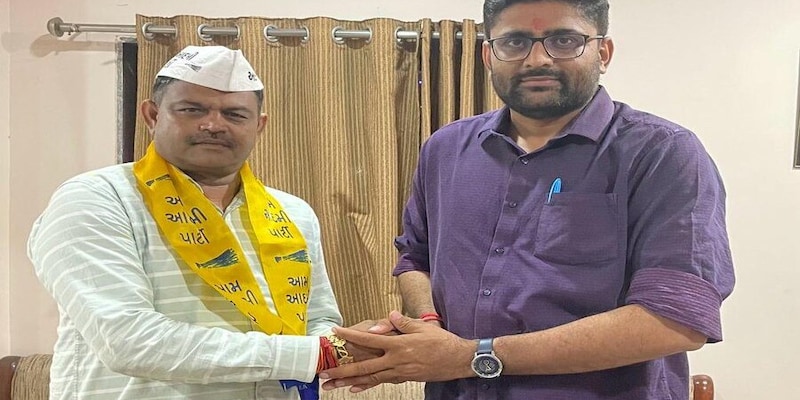 BJP released its first list of 160 candidates for the Gujarat election on Thursday naming Kalpesh Parmar as its candidate for the Matar seat in Gujarat's Kheda district. The sitting MLA Kesarisinh Solanki was quick enough to jump ships.

Informing about the development, state unit president of AAP Gopal Italia tweeted, "Kesarisinh Solanki ji, a popular, hardworking, fearless MLA of Matar Vidhan Sabha, has joined the Aam Aadmi Party today after getting inspired by the honest politics of Arvind Kejriwal. I heartily welcome Shri Kesari Sinh ji to the Aam Aadmi Party. Together we will form an honest government in Gujarat."
The saffron party released its first list of 160 candidates for the state elections on Thursday. The BJP named Kalpesh Parmar as its candidate for the Matar seat resulting in the sitting MLA switching sides.
Also Read:Gujarat polls 2022: BJP announces candidates on 160 seats — Full list
Solanki represented the seat for the first time in 2014 after winning the byelection soon after the then MLA Devusinh Chauhan was elected to the Lok Sabha. Chauhan is now the incumbent Minister of State for Communications in the Narendra Modi government. Solanki tasted victory again in 2017.
Meanwhile, the AAP has already declared the name of one Mahipatsinh Chauhan as its candidate for the seat. It remains to be seen which constituency will AAP choose to field its new entrant.
Also Read:The BJP seems ahead in Gujarat, but AAP may emerge as a challenger to Congress | View
With inputs from PTI
Check out our in-depth Market Coverage, Business News & get real-time Stock Market Updates on CNBC-TV18. Also, Watch our channels CNBC-TV18, CNBC Awaaz and CNBC Bajar Live on-the-go!