Bhojpuri actor Ravi Kishan, the BJP candidate from Gorakhpur, will benefit from the polarisation in the sizeable Nishad community and can also hope for upper caste votes, but the sharp consolidation among Dalits and Yadavs means he cannot take victory for granted.

Gorakhpur, located in eastern Uttar Pradesh, will elect an MP in the last phase of the Lok Sabha elections on May 19. Below is a collection of impressions gathered from a two-day visit to the constituency.

VIP Constituency
Gorakhpur has long been a hotbed of Hindutva politics. The main priests of the Gorakhpur temple have dominated its politics and elections for several years. Yogi Adityanath, the current mahant, was first elected an MP in 1999. He won handsomely again in 2014, but vacated the seat to become the chief minister of Uttar Pradesh. As a VIP constituency, the town bears the signs of what a CM can bring in terms of development. The hospitals are better run, roads smoother, electricity almost uninterrupted and the streets cleaner. Air traffic has also sharply increased since Adityanath’s ascent as CM. 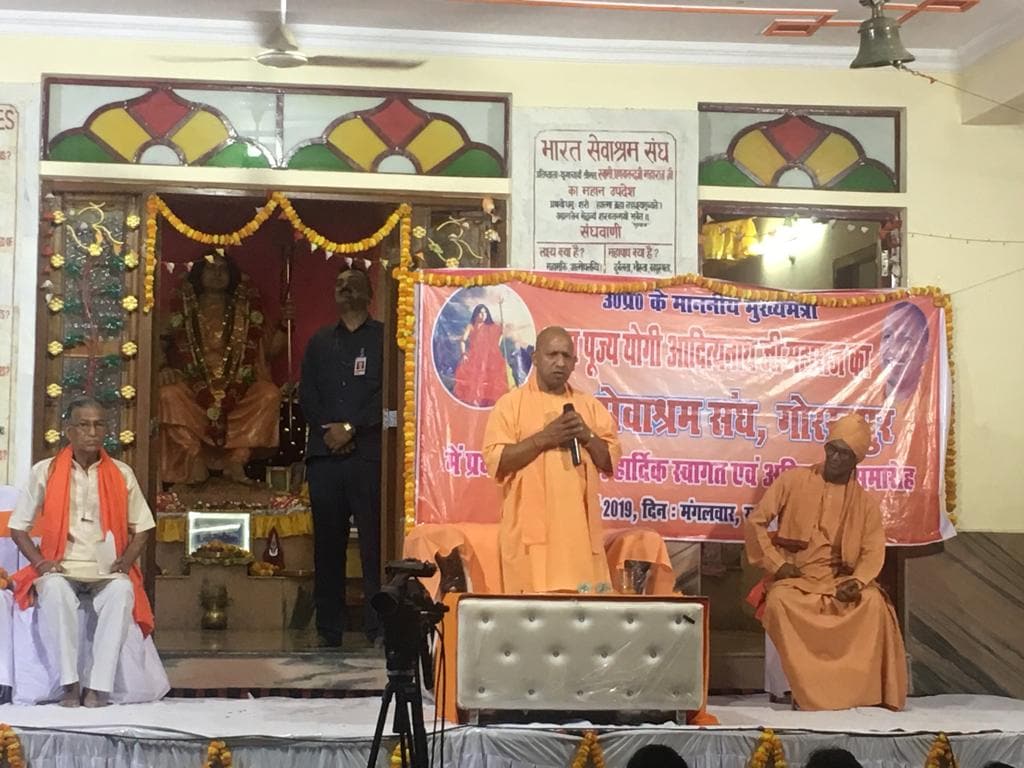 Uttar Pradesh chief minister Yogi Adityanath addressing a gathering at Gorakhpur.
Intriguing, Tough Battle On The Cards
The by-election in 2018 caused an upset when Praveen Kumar Nishad of the Samajwadi Party-Bahujan Samaj Party alliance defeated the BJP candidate. Nishad joined the BJP in April and is contesting on a party ticket in Sant Kabir Nagar. Bhojpuri actor Ravi Kishan is the BJP candidate from Gorakhpur and faces the SP’s Rambhual Nishad. Kishan will benefit from the polarisation in the sizeable Nishad community and can also hope for upper caste votes. But the sharp consolidation among Dalits and Yadavs means he cannot take victory for granted.
Growing Aviation Potential
For long, the only flights to Gorakhpur were run by Air India. But these were irregular. Gorakhpur’s aviation story took off when SpiceJet launched flights as part of its strategy to serve underserved routes with huge traffic potential. Last September, IndiGo followed suit. Today, there are 21 weekly flights to Gorakhpur. Besides Delhi, IndiGo connects the town to Hyderabad, Kolkata and Bengaluru. The air traffic is largely a mix of business and religious passengers as Nepal and Kushi Nagar, popular destinations for traders and Buddhist pilgrims respectively, are not far. Only the airport betrays Gorakhpur’s growing stature as an aviation destination. No more than an airstrip borrowed from the armed forces and a small terminal that can barely accommodate passengers from one flight, the airport direly needs a makeover.
The AIIMS Healing Touch
A stone’s throw away from the airport, an All India Institute of Medical Services (AIIMS) unit, a long-cherished dream of the people in these parts, is coming up briskly. An outpatient unit that opened in February is already drawing people from afar. People form serpentine queues every morning to secure a registration card, which costs Rs 20, but guarantees a year of free medical treatment. There are plenty of hospitals nearby, including the BRD medical college, but people are enamoured of AIIMS, by the promise of better doctors and treatment. 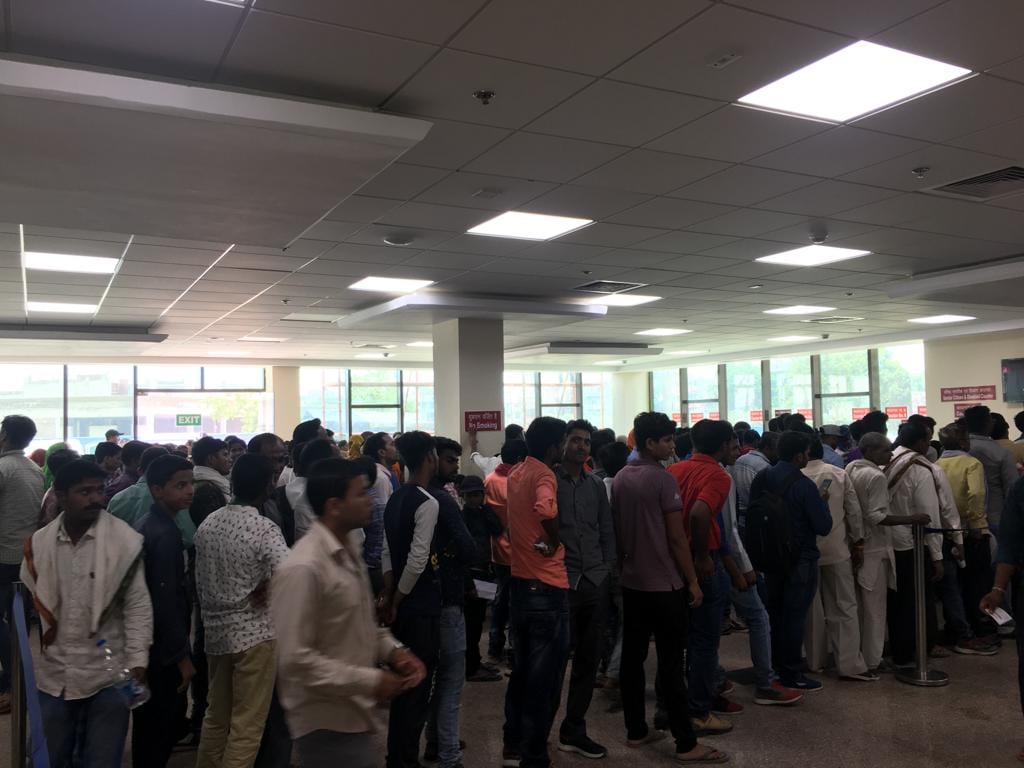 People standing in queues at AIIMS Gorakhpur.
A Medical College That Deserves Better
The BRD Medical College, the government-run hospital, was thrust into unwelcome spotlight in 2017 when scores of infants died due to lack of oxygen supply. Patients gathered at the hospital say things have improved. But going by large stretches of dimly lit corridors and unkempt facilities, one shudders to think about how bad were the bad days. Though it would be easy to criticise the authorities, it must be said in their defence that the hospital attracts crowds from neighbouring districts of Bihar, the entire Purvanchal region of Uttar Pradesh and even Nepal. To run an efficient operation is impossible due to the vast swathes of patients. BRD Medical College
The Doctor Who Cannot Practice
At the BRD Medical College, this writer stumbled upon Doctor Kafeel Khan. Khan became the face of the infant deaths. Some saw him a saviour, who worked tirelessly to reduce the number of deaths. There are many others who see him as the villain, alleging that he was hand in glove with the oxygen suppliers and was equally culpable for the terrible incident. The government went with the second narrative and suspended Khan. But that day, Khan seemed pleased because he had secured a legal victory recently. The Supreme Court had ruled that he should be given roughly Rs 16.66 lakh in unpaid salary.
The Whiff Of Jobs
Nearly 15 km away from the medical college, brisk work to build a massive fertiliser plant is underway. A unit of the Hindustan Urvarak and Rasayan Limited, which was incorporated on June 15, 2016, as a joint venture between Coal India Limited, NTPC and Indian Oil Corp, the plant will house a captive power plant and produce ammonia (2,200 metric tonnes a day) and urea (3,850 mt a day). Work, which commenced in February 2018, is expected to be completed in 2021. The promise of jobs hangs thickly in the air.
PM In CM’s Speech
Owing to the surprise defeat of the BJP candidate in the by-elections of 2018, Adityanath is sparing no effort to ensure the victory of his party in this election. He has spent the better part of recent days in Gorakhpur and is driving the entire campaign by himself. He has participated in a raft of roads shows and modest election meetings. Perhaps because of the nomination of Ravi Kishan, an outsider, Adityanath’s speech is filled with the deeds of Prime Minister Narendra Modi. One evening at a meeting held at the Bharat Sevashram Sangh, he reminded voters about how the PM washed the feet of Dalit sanitation workers, how he has always donated to public causes, how Pakistan was taught a lesson and on the PM’s focus on the uplift of the girl child. The audience cheered.
Check out our in-depth Market Coverage, Business News & get real-time Stock Market Updates on CNBC-TV18. Also, Watch our channels CNBC-TV18, CNBC Awaaz and CNBC Bajar Live on-the-go!