Goa Assembly Election Exit Polls: For the sunny state of Goa, exit polls released by various agencies on March 7, gave a slight edge to Congress. According to Time Now VETO, the INC is projected to win 16 seats, BJP 14 and AAP just 4, while six seats are predicted to go to others.

For the sunny state of Goa, exit polls released by various agencies on March 7, gave a slight edge to Congress. According to Time Now VETO, the INC is projected to win 16 seats, BJP 14 and AAP just 4, while six seats are predicted to go to others.
EXIT POLLS FOR 2022 GOA ASSEMBLY ELECTION
With a number of parties and heavyweight candidates in the fray, some of the opinion polls conducted on the final day of polling predict a hung assembly in Goa — but with an edge to the BJP-led National Democratic Alliance (NDA). 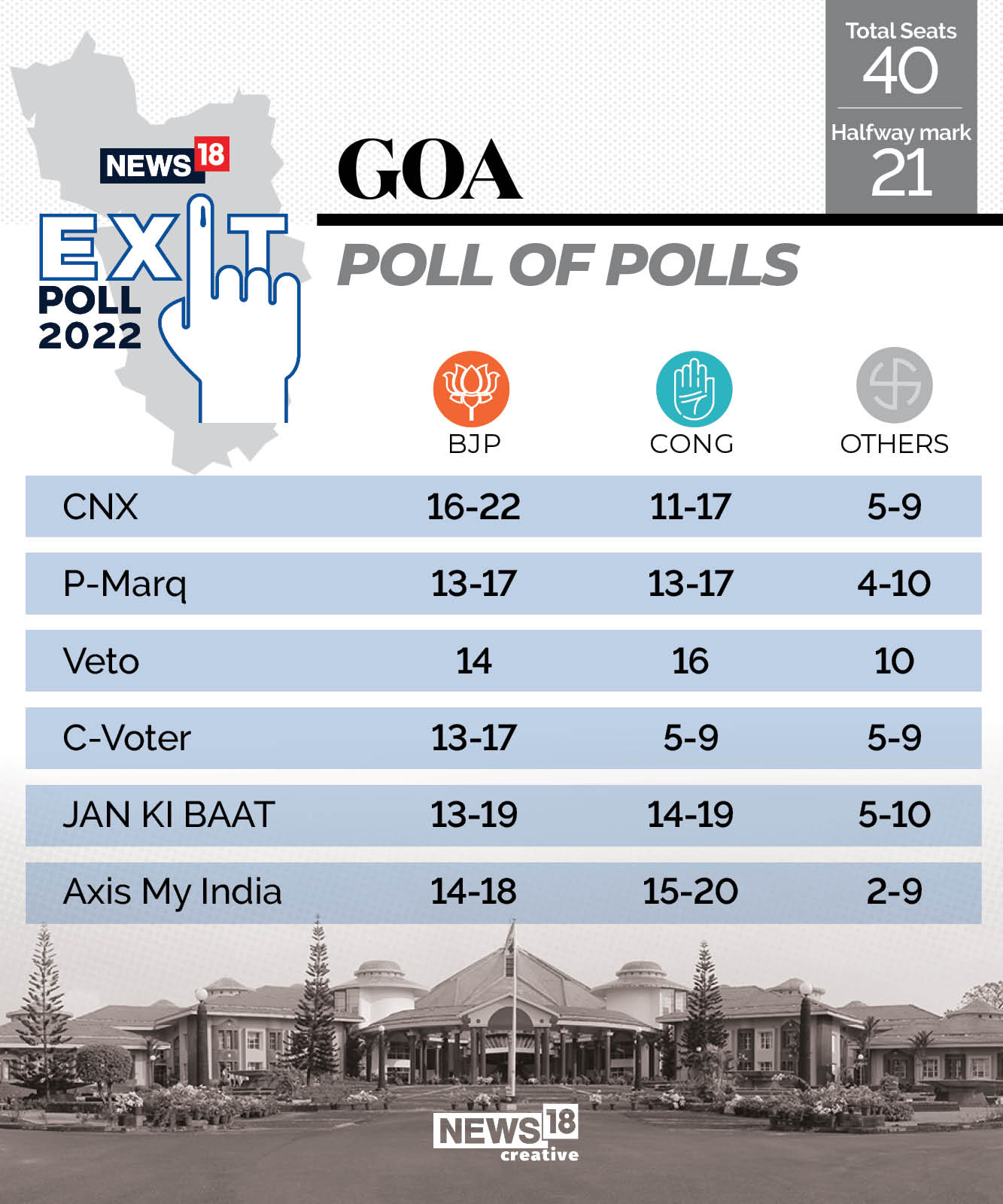 According to the CNX exit poll, there is a tough fight between the BJP and the Congress-led alliance. They predict the BJP to win between 16 to 22 seats while the Congress-led alliance winning between 11 to 17 seats. They predict the AAP to win between 0-2 seats.
The Jan Ki Baat exit poll too predicted a close fight between the BJP and the Congress-led alliance. According to them, BJP is winning 13 to 19 seats in Goa. The Congress-led alliance could win 14 to 19 seats. The AAP has a chance to win between 1 to 2 seats.
The ETG research exit poll also predicts a tough fight between the BJP and the Congress-led alliance.  According to their numbers, the BJP  will win 17 to 20 seats and the alliance could end up with 15 to 17 seats. The AAP could win 1 to 2 seats with the Others in the fray could win  4 to 6 seats.
The P-Marq exit poll gives the ruling BJP a slight edge in these elections. Their numbers tell that the BJP could be winning 16 to 20 seats while the Congress alliance will come second winning anywhere between 9 to 13 seats. In these exit polls, the AAP is winning 4 to 8 seats while the Others are winning 1 to 3 seats.
The Design Box exit poll and the Veto exit poll too have given the verdict in the favour of the BJP. The Design Box exit poll predicts the BJP winning seats in the range of 15 to 19 while the Veto has predicted a handsome majority of 20 to 23 seats for the BJP. In the  Design Box exit poll, the Congress-led alliance is emerging second with 14 to 18 seats. In the Veto exit poll, the alliance is predicted to be struggling with a win in only 4 to 6 seats.
Finally, the C-Voter exit poll too has forecast a  clear win for the BJP. According to them, the BJP should win 19 to 23 seats while the Congress-led alliance could end up winning a mere 4 to 8 seats.  This exit poll projects 5 to 9 seats for the AAP and 0 to 4 seats for the Others.
Polls to elect the new state Assembly were held on February 14 this year and the counting of votes would be done on March 10.
After the 2017 Goa Assembly polls, Congress had emerged as the single largest party by winning 17 seats in the 40-member House. However, the BJP, which had bagged 13 seats, then quickly tied-up with some regional outfits and independents to form the government in the state.
Over the last five years, several Congress leaders quit the party and as a result, the party's strength in the Assembly has been reduced to just two.
Goa registered a high voter turnout of 78.94 per cent, with the highest turnout recorded in the Sankhalim constituency in North Goa at 89.61 per cent, while the lowest voter turnout was 70.20 per cent at Benaulim in South Goa.
Also Read: Exit polls 2022 LIVE news update - All eyes on UP, Punjab, Goa, Manipur, Uttarakhand on what pollsters predict
Players in the fray:
Besides the Congress and the BJP, the Aam Aadmi Party (AAP), the Trinamool Congress (TMC), the Maharashtrawadi Gomantak Party (MGP), the Shiv Sena, the Nationalist Congress Party (NCP), the Revolutionary Goans, the Goencho Swabhimaan Party and the Jai Mahabharat Party, among others, were also in the poll fray besides 68 independent candidates.
Goa witnessed high decibel campaigns this election season. Chief Minister Pramod Sawant, who contested the election from Sankhalim has claimed the BJP will win return to power after winning more than 22 seats.
Amid speculation about his role in the government in the event of BJP storming back to power in Goa, Sawant had said that it was: "obvious that I would be the chief minister as the present election is being fought under my leadership".
The Congress and the Goa Forward Party (GFP) forged a  pre-poll alliance, while the Mamata Banerjee-led TMC tied up with the MGP.
The Congress fielded 37 candidates and its ally GFP three, while the BJP contested on all 40 seats.
Prominent Candidates:
The prominent candidates in the fray in Goa include Sawant of BJP and the Leader of the Opposition Digambar Kamat of the Congress.
Other prominent faces in the election included former CMs, Churchill Alemao of the TMC, Ravi Naik of the BJP and Laxmikant Parsekar who fought the election as an independent candidate.
Besides the former CMs, former deputy CMs Vijai Sardesai of the GFP and Sudin Dhavalikar of the MGP are also in the fray.  Utpal Parrikar (an independent candidate), the late CM Manohar Parrikar's son and the AAP's CM face Amit Palekar are also the ones to watch out for.
Check out our in-depth Market Coverage, Business News & get real-time Stock Market Updates on CNBC-TV18. Also, Watch our channels CNBC-TV18, CNBC Awaaz and CNBC Bajar Live on-the-go!