Updated : March 28, 2019 02:36 PM IST
The Congress-NCP will face a major test in the state's urban areas which forms the support base of the BJP
Agricultural distress, unemployment and quota politics remain key issues going into Lok Sabha elections

With 48 Lok Sabha seats at stake, Maharashtra will be a key state for the political future of the incumbent National Democratic Alliance (NDA) and the opposition United Progressive Alliance (UPA) in the upcoming Lok Sabha elections. Maharashtra will vote in four phases on April 11, 18, 23 and 29 with a bipolar contest between the two leading alliances.

In 2014, the Bharatiya Janata Party-Shiv Sena-led NDA had swept the state's 42 seats, while the Congress and the Nationalist Congress Party (NCP) alliance was reduced to a total of 6 seats, with the Congress reduced to just 2 seats. The BJP and Shiv Sena have already gained the momentum by sealing a seat-sharing pact, ironing out last three years of wrinkles and uneasy ties. Shiv Sena's uneasiness stems largely from BJP's ascending graph in the state and local body elections. The relationship between the two Sangh Parivar allies of 25 years soured over seat-sharing for the 2014 assembly elections, after which the two fought separately.

The BJP won 123 of 288 assembly seats and the Sena could manage 63. While the split verdict brought the two back together to form the government, but Sena has not spared a single chance to target the BJP and has played the role of opposition on most scores.

On top of it, Sena chief Uddhav Thackeray has been very critical of the Modi government with the party's mouthpiece Saamna regularly carrying hard-hitting editorials targeting Prime Minister Narendra Modi and the BJP on a range of issues ranging from farm distress, unemployment, terrorism et al. 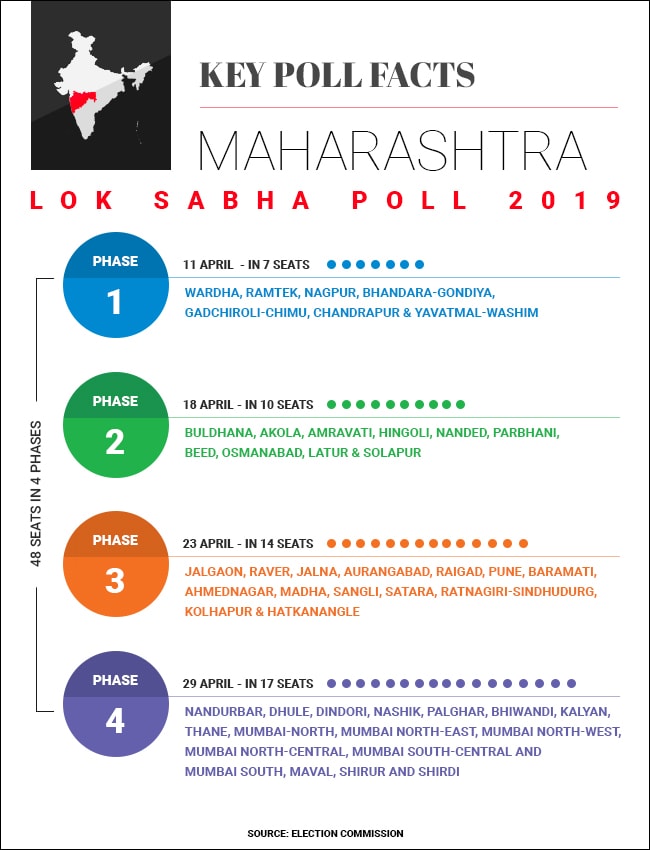 NCP to contest in 26 seats, Congress in 22, both ignore smaller allies

The opposition will fight all 48 seats together with the NCP getting 26 seats, while the Congress will contest in 22 seats. The Congress-NCP combine is facing challenges of its own sorts. For NCP, Sharad Pawar's decision to not contest the elections will hurt the morale of NCP workers, while the Congress is facing defections from its ranks.

A major cause of embarrassment for the party was Leader of Opposition Radhakrishna Vikhe-Patil’s son, Sujay, joining BJP recently to contest from Ahmednagar south seat. Within Mumbai where six Lok Sabha seats are at stake, former MPs like Milind Deora and Priya Dutt have voiced concerns against chief Sanjay Nirupam.

The BJP-Sena alliance looks ready and formidable on the paper, but the two parties have not been able to accommodate smaller allies like Mahadev Jankar's Rashtriya Samaj Paksha (RSP) and Union minister Ramdas Athawale's Republic Party of India (Athawale). Raj Thackeray's Maharashtra Navnirman Sena (MNS), faced with an existential crisis, after its lone MLA Sharad Sonavane joined Shiv Sena recently, may come up with a tacit understanding with the NCP.

In the UPA, Congress and NCP have failed to accommodate smaller allies like Prakash Ambedkar's Bharipa Bahujan Mahasangh and Raju Shetty's Swabhimani Shetkari Sanghatana (SSS). Ambedkar has set a March 15 deadline to the Congress-NCP combine to work out a seat-sharing formula or else the party will contest in all Lok Sabha seats. Agri distress versus terrorism and the issue of Maratha quota

Like many other states in India, agricultural distress, unemployment and quota politics remain key issues going into Lok Sabha elections. The state has seen the highest number of street protests by farmers in the last three years despite the Devendra Fadnavis government’s loan waiver worth nearly Rs 24,000 crore.

Maharashtra is currently facing a drought, second in the past four years, and the UPA is expected to derive political mileage from the issue as seen during the assembly polls in Madhya Pradesh, Rajasthan and Chhattisgarh in December 2018. BJP will counter Congress with Modi government's Rs 75,000 crore Pradhan Mantri Kisan Samman Nidhi scheme announced in the interim budget. The Centre has so far transferred over Rs 5,000 crore to over 2.6 crore small and marginal farmers under the scheme.

The Congress-NCP will face a major test in the state's urban areas which forms the support base of the BJP. The party now controls 15 of the 27 municipal corporations and spending on big-ticket infrastructure projects in cities has created a positive perception of the government. Traditionally, BJP and Sena have done well in urban pockets as well.

The Fadnavis government's move to give 16 percent quota for the Maratha community coupled with the Modi government's 10 percent reservation for the economically weak in the upper caste could help the NDA, but may not help the alliance's cause with OBCs, which comprise roughly half of the state population. A Maratha versus OBC equation could go towards either alliance. The poll narrative among the Dalits in the state will be shaped by the Bhima-Koregaon violence and related events and may not go in favour of the NDA.