Updated : October 28, 2019 12:46 PM IST
A large number of Hindu immigrants reside in Jodhpur while they have relatives in bordering districts like Barmer, Jaisalmer, Jalore and Bikaner.
Policies and schemes for immigrants are not being implemented on the ground in India.

While the Imran Khan-led Pakistan government keeps raising a hullabaloo about the religious persecution and atrocities in the Kashmir region, the situation at their backyard presents quite a contrasting picture to the stance they portray. Minorities in Pakistan, especially members of the Hindu community, are immigrating to India fearing religious persecution and threat to life.

A large number of Hindu immigrants reside in Jodhpur while they have relatives in bordering districts like Barmer, Jaisalmer, Jalore and Bikaner, which are close to Pakistan. This is because of the provisions under the Foreigners (Protected Areas) Order, 1958, where the movement of foreign nationals is restricted for around 40 kilometres from the international border.

Ajmal Meghwal, 22, originally a resident of Sanghar district of Sindh province in Pakistan, settled in Rajasthan’s Jodhpur district a year ago fearing religious persecution following the death of a relative.

Ajmal stated that they were engaged in agricultural work and used to share it with a local Muslim landlord on a seasonal basis. While they had settled quite well in Pakistan, the only problem they were facing was fear of religious persecution, claimed Ajmal. It is extremely difficult for a Hindu family to live in an Islamic country, he highlighted.

While incidents of atrocities against Hindus are common, it took the killing of his aunt that triggered the decision to leave the country. Ajmal stated that about two years ago, the landlord’s son, who was trying to park his car in front of the entrance to the house, was asked by his aunt Gulan Bai to park somewhere else. However, he got angry at once and put his car in reverse and ran over her three times while crushing her intentionally, Ajmal claimed. He also warned to kill anyone who forbids him from parking his car anywhere in his ‘own’ country, Ajmal alleged.

“My family and I pleaded for justice for over a year but found that justice is not for Hindu victims in Pakistan. After losing one family member and being denied justice, we learnt a lesson and decided to move to India for a safer and peaceful life,” Ajmal added. He said that while there are financial constraints, at least there is no threat to life.

Like Ajmal, Kewal Meghwal, 58, formerly a resident of Sanghar district, arrived in India about three months ago owing to the fear of religious persecution. Presently on a short-term visa permit, Kewal with his 19 family members stay in Jodhpur district.

He pointed out they worked as bonded labourers under a Muslim landlord in Pakistan and in turn witnessed and experienced multiple instances of atrocities and religious persecution. He added that he arranged for immigration documents through a middleman and fled with his whole family. They took Thar Express, a weekly train between India and Pakistan that was cancelled on August 16, after the relationship between the neighbouring countries deteriorated after the abrogation of Article 370 of the Indian constitution.

A former resident of Mirpurkhas district in Pakistan Bhimji Koli moved to India about six months ago. A businessman who used to run a flour mill and a transport business, Koli migrated after two minor girls from his family were kidnapped and forcefully converted to Islam, since he also has two sons and five daughters. Presently residing in Jodhpur district on a short-term visa permit, he works as a tailor. Like Kewal’s, even Koli’s family also arrived on Thar Express.

Another former resident of Sanghar district Damaram Bheel, 80, highlighted that it is difficult to live in Pakistan with a Hindu identity.

He stated that he worked as an agricultural labourer and had witnessed unbearable disgust and persecution. He mentioned that his only son Kasturo was frustrated with such an environment and wanted to immigrate to India in hope to get rid of such religious persecution. "Whenever he used to hear about the incidents of abductions of minor Hindu girls who were forcibly converted to Islam, he couldn’t sleep for days,” added Damaram, who has three daughters. 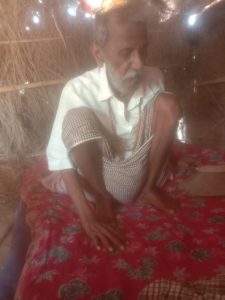 Damaram Bheel[.He added that about three years ago, a minor boy of the family was abducted by locals and forcibly converted him to Islam. Damaram claimed that they pleaded a lot for his return, but it didn’t bear any results. He mentioned that the incident instigated Kasturo to relocate to India and they came about two years ago. He added that Kasturo passed away due to cardiac arrest last year.

He, however, stated that life for immigrants in India is difficult. Bheel mentioned that it’s not possible for the whole family to survive on the earnings of a single member. He said they manage on contributions by a few relatives, and added that there are numerous legal complications for getting a long-term visa, renewal of the passport from Pakistan’s embassy in New Delhi.

“Though I am not certain about the future of my family, I still think that I will die with the satisfaction that my growing granddaughters are at least safe here as Hindu girls,” he stated.

While there are many media reports depicting the plight of Hindus in Pakistan during the present Imran Khan’s regime, these are not the only stories and Hindus have felt unsafe even in the past.

Ranaram Bheel, 48, who emigrated from Punjab province in Pakistan, said that he was living in Pakistan with his wife and daughter and left about a decade ago after his Muslim landlord kidnapped his wife and forcibly converted her to Islam and married her. He stated that the incident took place in 2004, after which he filed a police complaint. He claimed that the police only offered him verbal assurances whenever he approached them, while he kept receiving threats from the accused. “Finally I decided to save my daughter’s future and moved to India. Since then, I have never seen my wife or even heard her voice,” he added.

His concerns are similar to Damaram. He pointed out that there is no mechanism in place to ensure that immigrant families are looked after properly and sometimes it’s difficult to earn two meals a day. “People also avoid giving employment to us because of our immigrant identity, but despite all the hardships, I have no other option to save the future of my daughter, and I feel that in comparison to Pakistan, my daughter is safer here,” he added.

Another resident from Sanghar district Prem Bheel, 40, said that while his family was well-settled in Pakistan, migrating to India was always on their minds since 1992. He explained that his father began thinking of migrating to India after anti-Hindu riots erupted in Pakistan following the demolition of Babri Masjid in Ayodhya, Uttar Pradesh. They had a shop run by family members selling cosmetic items. Prem said the temples in their town and most of the shops of Hindu families were vandalised and set on fire at that time. Even though their shop was vandalised, they managed to escape with the help of their friends. He pointed out that after that incident they started looking for ways to safely leave to India, but wasn’t able to. However, as media reports of three minor girls being abducted surfaced, they moved to India fearing religious persecution.

“One of the three girls was killed, while two were forcibly converted to Islam and married off to Muslim boys,” he highlighted. He claimed that Hindus in Pakistan are victims of religious atrocities, but nobody is there to listen to their pleas. The police neither offers them any protection nor takes any action when a crime has been committed against them.

Prem stated that they have been living in Jodhpur for the last 15 years and has faced problems due to lack of earning opportunities. He works as a scrap dealer on a push-cart and hardly earns enough to support his family. He pointed out that they are yet to receive Indian citizenship and has been caught in the red-tapism for many years.

Prem urged the Narendra Modi-led government in India to provide some relaxation in gaining citizenship to the Pakistan immigrants.

“We left Pakistan because being Hindus we weren’t safe and moved to India finding it as a safer place for Hindus. But if India doesn’t accept us, where will we go,” argued Prem.

The President of the Seemant Lok Sangathan, an organisation working for the rights of immigrants from Pakistan in India, Hindu Singh Sodha stated that the situation of the Hindu minority in Pakistan is comparable to hell. However, he lamented at the condition of the Hindu immigrants in India who are living a life of poverty.

He explained that the policies and schemes for the immigrants are not being implemented on the ground. The powers of giving citizenship have been delegated nearly three years ago, but unfortunately only one-fifth of the eligible cases have been granted citizenship so far, he informed. “The immigrants are forced to live in utterly deplorable conditions as they don’t have citizenship and other required civil documentations. Some of the immigrants even return back to Pakistan due to the troublesome situation over here in India for the immigrant community, and have reportedly converted to Islam when they went back to Pakistan,” claimed Sodha.

He, however, added that the majority of the Hindu immigrant families from Pakistan have no other option except staying here in India in order to save themselves and their daughters.

He urged the central and state governments to ensure the rescue of the Hindus still in Pakistan, and rehabilitation of the immigrants.

He highlighted that the authorities concerned must not put hurdles in the implementation of the policies meant for immigrants in India, and the state governments must introduce and execute a robust recovery and rehabilitation package for the immigrants.