Farmers protest highlights: In a move that could have far-reaching consequences on the politics in Uttar Pradesh, a panchayat in Agra has asked the nine MLAs and two MPs of the district to either issue a letter of support to the protesting farmers or face "social boycott". This comes a week after the khap panchayats in Muzaffarnagar called for a social boycott of those who do not support the farmers' agitation. According to a BKU functionary, farmers' groups in all districts will now start asking BJP legislators and MPs to clarify their stand on the farmers' protest or face the consequences.

We that it's a wrap to the live updates on farmers' protests for today. For more news, views and updates, stay logged on to CNBCTV18.com.

The central government's approach towards the farmers' protest against the three new farm laws has been an adversarial and a confrontationist one from the very beginning, a group of former civil servants said in an open letter written on Friday. The letter signed by 75 former civil servants, including Najeeb Jung, Julio Riberio and Aruna Roy, who are part of the Constitutional Conduct Group (CCG) also said that the apolitical farmers are being treated like "an irresponsible opposition to be derided, demonised and defeated".
Share:

The Samyukt Kisan Morcha, an umbrella body of the farmer unions protesting the three farm laws, on Friday said there would be no 'chakka jam' in Delhi on February 6 even as it asserted that peasants in other parts of the country will block national and state highways for three hours but in a peaceful way. In a statement, the SKM said emergency and essential services such as ambulance and school bus will not be stopped during the 'chakka jam' that is proposed to be held between 12 pm and 3 pm on Saturday. #PTI
Share:

The leader of the Congress in the Lok Sabha, Adhir Ranjan Chowdhury, on Friday asked the BJP-led government at the Centre as to why it is getting so much rattled with the Tweets of international celebrities supporting the farmers' agitation in India. #IANS
Share:

Thousands of farmers turned up for a meeting in Shamli district in western Uttar Pradesh on Friday amid a growing clamour against the Centre's agri-marketing laws in the region. People from Shamli and nearby districts started reaching Shamli's Bhainswal village on tractors, two and four-wheelers and on foot for a 'kisan panchayat' being held there by the Rashtriya Lok Dal (RLD). #PTI
Share:

Opposition parties' leaders in Bihar have organised human chains, tractor rallies, Raj Bhavan march, dharnas and protests in support of the farmers' agitation at the Delhi borders, but have failed to enthuse the farmers here to join the stir. They are still maintaining a distance from the protests. Tejashwi Yadav, the Leader of the Opposition in the Bihar Assembly, has appealed to the state's farmers to join the farmers' agitation. Apart from Tejashwi, Gurnam Singh Chaduni, a senior leader of the Sanyukt Kisan Morcha (SKM), who is involved in the farmers' agitation at Delhi's borders, came to Bihar and urged the farmers here to join the movement, but they are not enthusiastic about it. Many farmers in the region are not even aware of this movement. #IANS
Share:

Agitating farmers have proposed 'chakka jam' tomorrow. In view of the violence that happened on January 26, Delhi Police have made adequate security arrangements at borders so that miscreants can not enter the national capital. "We are monitoring content on social media to make sure rumours are not spread against police or other things. The protestors are camping at the borders of Delhi. We are in touch with the police force of other states too," says Chinmoy Biswal, Delhi Police PRO.

Rashtriya Loktantrik Party holds a tractor rally in Jaipur to protest against the Centre's farm laws. 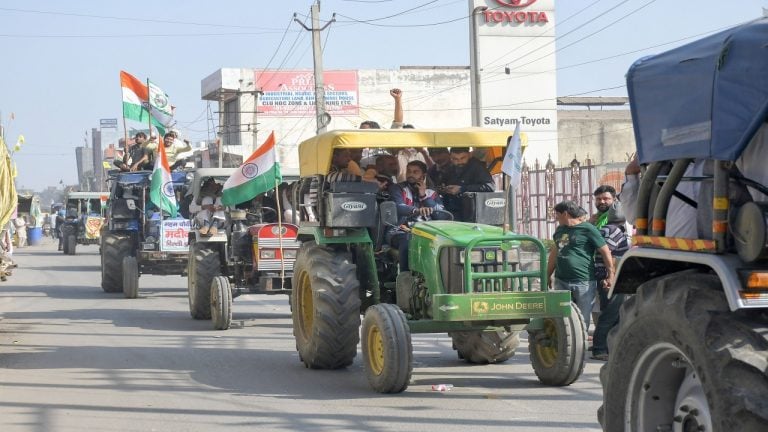 "I made it clear that if the government is ready to make amendments, it does not mean there is any problem in farm laws," Tomar said.Get latest Agriculture online at cnbctv18.com

The Shiv Sena on Friday charged that anyone speaking the truth is dubbed as a "traitor" or "anti-national" and that cases of sedition have been slapped against those criticising the government. Participating in the debate on the Motion of Thanks on the President's address in Rajya Sabha, Sena member Sanjay Raut said farmers fighting for their rights have been branded as anti-nationals or Khalistanis.
Share:

Beyond Binaries: From farm solidarity to networks of caste and clan, what drives farm protests of west UP, Haryana The present unrest, which is resulting in large congregations across west UP and Haryana, has an undercurrent of Jat anger to it, complicating the agrarian core of the movement.Get latest Politics…

I made it clear that if the government is ready to make amendments, it does not mean there is any problem in farm laws. People in a particular state are misinformed: Agriculture Minister Narendra Singh Tomar

Agriculture Minister Narendra Singh Tomar addresses Rajya Sabha. He says, "15th Finance Commission has recommended for providing Rs 2.36 lakh crores to gram panchayats, which has been accepted by the Cabinet. Around Rs 43,000 crore have been sanctioned for healthcare in rural areas. Rs 2.8 lakh crores will be spent via gram panchayats in 5 years."

We continuously increased the fund for MGNREGA. When COVID-19 hit the country, we raised the fund allocation to MGNREGA from Rs 61,000 crores to Rs 1.115 lakh crores. More than 10 crore people were provided employment. The pro-poor schemes of the government have brought a change in the lives of the people living in villages: Agriculture Minister Narendra Singh Tomar

We have started to provide MSP, 50 percent more than the production cost. Also, Rs 1 lakh crore agriculture infrastructure fund has been given under Atmanirbhar package. We have tried to ensure the requisite investment reaches the agriculture sector: Agriculture Minister NS Tomar

Haryana ADGP (law & order) issues directives to SPs & Commissioners in view of farmers' proposed chakka jam tomorrow. "Maximum force shall be pulled out from non-operational duties. Intelligence network should be geared up and necessary preventive action may be taken," it reads.

Those who could not reach here will observe chakka jam in their area. This chakka jam will not happen in Delhi: BKU spokesperson Rakesh Tikait

The Delhi Police Commissioner is holding a meeting with senior police officials over the proposed chakka jam by agitating farmers on February 6, Saturday.

Farmers were forced to fight for their rights and to get justice. The Government of India is responsible for the situation that has arisen. I want to pay tributes to the 194 farmers who died during the protests: Congress MP Anand Sharma in Rajya Sabha

BJP has issued a three-line whip to its Rajya Sabha MPs to be present in the House from Feb 8 to Feb 12 to support the government's stand.

In a move that could have far-reaching consequences on the politics in Uttar Pradesh, a panchayat in Agra has asked the nine MLAs and two MPs of the district to either issue a letter of support to the protesting farmers or face "social boycott". This comes a week after the khap panchayats in Muzaffarnagar called for a social boycott of those who do not support the farmers' agitation. According to a BKU functionary, farmers' groups in all districts will now start asking BJP legislators and MPs to clarify their stand on the farmers' protest or face the consequences. "We will stage protests at residences of MLAs and two MPs in the districts. We will ask them to provide a letter supporting the peaceful protest of farmers or they will have to face social boycott," the functionary said.

Iron nails studded on roads at the Ghazipur border to restrict the movement of farmers agitating against the new agriculture laws have been "repositioned" but the security arrangements at the site remain the same, a senior police officer said on Thursday. The police's statement comes after videos and photos of workers removing the nails from roads near Ghazipur border surfaced on social media. The iron nails studded on roads have been "repositioned" behind the barricades, Deputy Commissioner of Police (East) Deepak Yadav. "Videos and photos are getting circulated in which it is shown that nails are being taken off at Ghazipur. These are just repositioned behind the barricades. Security arrangement at the border remains the same," he said.

MPs from 10 Opposition parties on Thursday wrote a letter to Lok Sabha Speaker Om Birla saying that "The impression we got at the Delhi Ghazipur border is like the border between India and Pakistan. The condition of farmers resemble that of prisoners in jail." Over 15 MPs from parties including SAD, DMK, NCP and Trinamool Congress were stopped by the Delhi police from meeting the protesting farmers at the Ghazipur border on Thursday morning.

For all the global uproar the farmers' movement against the new agri laws has caused, the man at its centre seems oblivious of the celebrity support he has been getting. Rakesh Tikait, the 51-year-old Bharatiya Kisan Union (BKU) leader from the hinterlands of Muzaffarnagar in western Uttar Pradesh, welcomed the support from international artistes and activists, including Rihanna and Greta Thunberg, but acknowledged he does not know them. Talking to the media at Ghazipur on the Delhi-Uttar Pradesh border, Tikait, who is credited with reviving the agitation that had gone slim after the January 26 violence in Delhi, sought to know who these people were. "Who are these foreign artistes?" Tikait said exhibiting unawareness when asked about the foreigners supporting the farmers' movement. When informed about American pop-singer Rihanna, adult star Mia Khalifa and Swedish teen climate activist Greta Thunberg, the Sisauli-born Tikait responded: "They may have supported us, but I don't know them." "If some foreigner is supporting the movement, then what is the problem. They are not giving us or taking anything away from us," he said.