For phase 4, a News18-Ipsos poll has predicted 42-44 seats for Narendra Modi-led Bharatiya Janata Party and 11-13 seats for allies. Congress is likely to get 2-6 seats out of the 72 seats

The phase four of the 2019 Lok Sabha elections, held on April 29, witnessed 64 percent voter turnout in 72 constituencies across nine states.

West Bengal recorded a high turnout at 76.47 in the eight seats though clashes broke out between supporters of rival parties in Nanoor, Rampurhat, Nalhati and Suri areas of Birbhum seat, leaving several people injured. In Barabani, BJP candidate from Asansol and Union minister Babul Supriyo's vehicle was vandalised allegedly by TMC workers outside a polling station while in Dubrajpur area central security forces personnel reportedly opened fire in the air to disperse irate people who attacked them when they were barred from entering the booths with mobile phones.

Election to 542 Lok Sabha seats were conducted in seven phases between April 11 and May 19. Results will be declared on May 23. 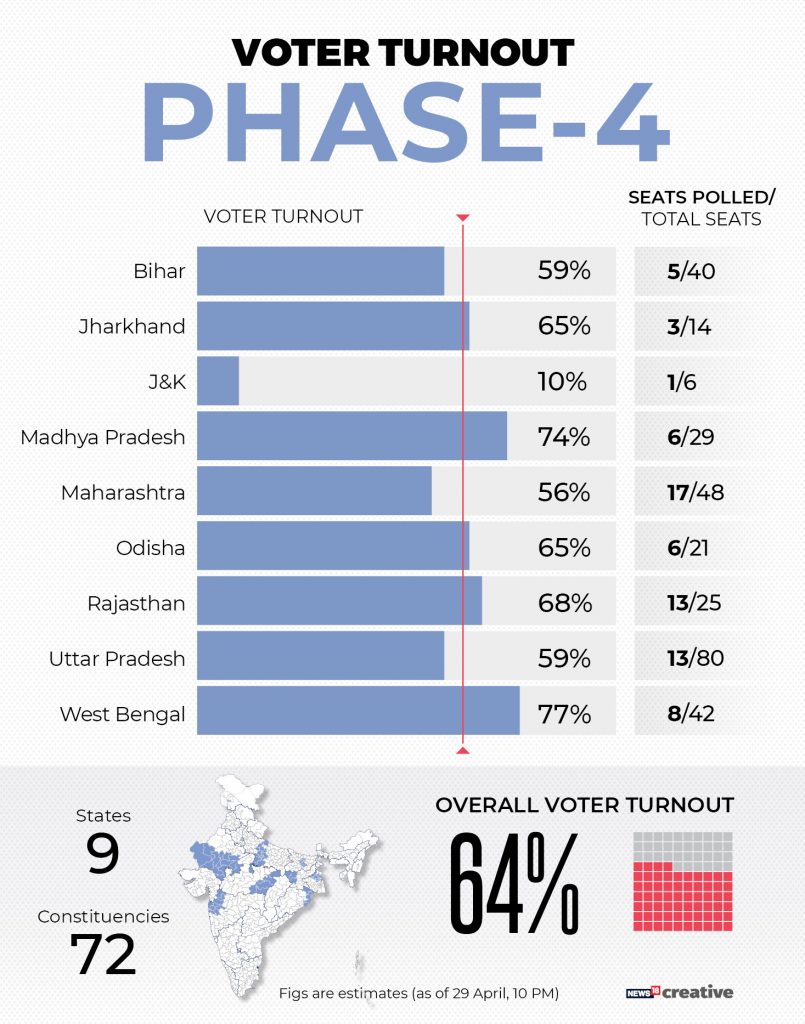 Polling was peaceful in Rajasthan, with tribal dominated seat of Banswara recording the highest voting percentage at 72.34, followed by Barmer which recorded 72.21 percent voting, according to state election officials.

The stakes are high for the BJP which had won 56 of the 72 constituencies in the 2014 polls. About 12.79 crore people were eligible for voting in the phase, which marked the start of polling in Rajasthan and Madhya Pradesh while elections came to an end in Maharashtra and Odisha.

Overall, the News18-Ipsos exit poll showed NDA securing 292-3112 seats beating the 62-72 seats by the Congress-led United Progressive Alliance, a coalition of opposition parties. The tally of the Congress, which won 44 seats in 2014 — its worst-ever electoral performance — is projected to slide further to 32-37 seats.