Does Tulsi Gabbard have a real chance in the US presidential race?

Does Tulsi Gabbard have a real chance in the US presidential race?

Gabbard, 38, outspoken, thoughtful and at the same time controversial, is certainly a viable candidate

Tulsi Gabbard, America’s first Hindu presidential candidate,  recently crossed 66,000 individual donors, qualifying for a place on the national debate stage among the Democratic contenders running for President in 2020. She has been the first person in the US House of Representatives to take her oath of office on the Bhagwad Gita – and could well become the first US president to do so too.

What is the likelihood, with a strong field of over 24 presidential contenders – and still growing? 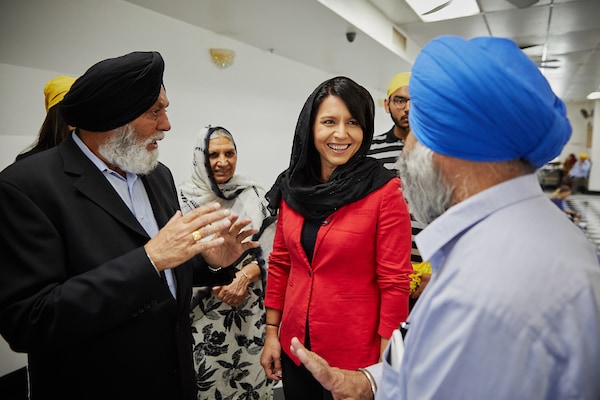 Tulsi Gabbard with Sikh supporters in California
Malik believes she is the ideal candidate. He says, “To me Tulsi is transcendental – she transcends conventional wisdom and orthodoxy of both parties, Republicans and Democrats. So much has changed in the international and economic world that the old modalities don’t apply. She doesn’t fit into a box neatly – it isn’t about controversial, it’s about the future. It’s about putting good ideas over labels.”
The Democratic National Committee requires 130,000 donors for candidates to remain in debates from September onwards. As we get closer to the face-off, it will be interesting to see which way the Indian-American voters lean, with so many favourites in the running from Joe Biden to Kamala Harris to Tulsi Gabbard and Cory Booker.
Now that Gabbard has got a space on the national debating stage, Americans will get a chance to see her ideas up-close. Ashok Lalwani compares her to a dark horse:  “Let the first debate happen in ten days in Miami and if she gets time and exposure people will get to see how her foreign policy dovetails with her domestic policy and they will  know she is absolutely commander-in-chief material. She is a soldier!”
Lavina Melwani is a New York-based journalist who blogs at Lassi with Lavina.
Read Lavina Melwani's columns here.
Check out our in-depth Market Coverage, Business News & get real-time Stock Market Updates on CNBC-TV18. Also, Watch our channels CNBC-TV18, CNBC Awaaz and CNBC Bajar Live on-the-go!