Updated : October 07, 2019 07:42 AM IST
Hundreds of Mizos wearing traditional mourning shawls (pawn dum) spread out across Aizawl city on Saturday in protest demonstrations against the government’s proposed move to reintroduce Citizenship (Amendment) Bill, 2016 (CAB).
The Joint NGO Coordination Committee gave out a release stating that the home minister has assured of bringing in provisions under the Inner Line Permit (ILP) system to ensure the safety of the Mizos.
At the fourth North East Democratic Alliance (NEDA) conclave held in Guwahati recently, Shah, while addressing the fears of the regional allies of the BJP, said the proposed bill would not affect the special provisions for northeastern states under Article 371.

As Union home minister Amit Shah landed in Mizoram on Saturday, the opposition parties and a few NGOs along with representatives from Christian religious bodies took to the streets with placards and banners reading, “Don’t provoke us with CAB”, “Leave Mizoram and NE states outside CAB”, “Withdraw CAB”, among others.

It was a ‘peaceful demonstration’, as some protestors said — having made their point — time and again, without disrupting the city's traffic or law and order situation. They stood outside the Thuampui helipad, and took over a 3 km stretch of road leading to Treasury Square near the deputy commissioner’s office in Aizawl, and close to the Raj Bhawan.

Earlier, the Mizoram Joint NGO Coordination Committee, a conglomerate of civil society organizations had called off the protest a day ahead of Shah’s visit to the state. The meeting between the home minister and the stakeholders over Citizenship Bill ended on a positive note on Saturday, according to the people aware of the matter. The Joint NGO Coordination Committee gave out a release stating that the home minister has assured of bringing in provisions under the Inner Line Permit (ILP) system to ensure the safety of the Mizos. The ILP system, created by the British to demarcate areas by drawing geographical lines, was introduced in Mizoram in 1873. The official document issued by the state government allows inward travel of a citizen into certain areas for a limited period. The Mizos consider it as a protective shield against the entry and assimilation of non-tribals in the state.

“The ruling MNF party dare not speak against the CAB fearing that the BJP might not favour them financially. Chief minister Zoramthanga and his cabinet did everything they could to subside the growing antagonism against the proposed CAB amendment. They could somehow also convince the joint NGO Coordination Committee that had strongly opposed the bill. The state government paved a way for the Union home minister's smooth visit today,” said Sangzuala Hmar, chairman, MPCC communication department.

The North East Forum for Indigenous People (NEFIP) that has been part of anti-bill protests across the region also submitted a memorandum to Shah through their representatives. The NEFIP leadership had earlier written to Prime Minister Narendra Modi over the issue, voicing their concerns and citing reasons for their objection to the bill.

“There is no competent authority in India to make provisions in Inner Line Regulations — it was created during the British era. Almost 99 percent people in Mizoram are ready to protest on basis of the UN Declaration on the Rights of Indigenous Peoples (UNDRIP 2007). In principle, NEFIP wants to convey their concern to the United Nations Human Rights Council (UNHRC),” said NEFIP member Ruatliana Fanai.

The Joshua Operation — a lesser known Christian faith-based organisation wrote to the Home Minister, stating: “You can do whatever you want upon us, but here is our Lord God Jehovah who says, “Who will win the race?”

At the fourth North East Democratic Alliance (NEDA) conclave held in Guwahati recently, Shah, while addressing the fears of the regional allies of the BJP, said the proposed bill would not affect the special provisions for northeastern states under Article 371, and would not be in conflict with ILP system in certain states or the existing state laws that safeguard the cultural, linguistic and other rights of locals. 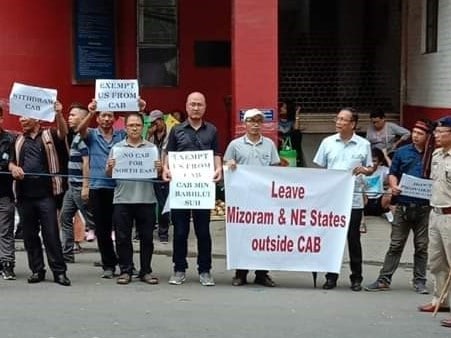 Mizoram chief minister Zoramthanga, while addressing the NEDA conclave, had requested Amit Shah to exclude the Northeast from the purview of the Bill, declaring that all political parties that supported the contentious Bill are on the "verge of suicide". On Saturday, Zoramthanga met Shah at the Raj Bhavan and apprised him of the situation and people's opposition to the Bill.

NEDA convener Himanta Biswa Sarma had earlier said the government was consulting stakeholders at various levels and these discussions would have to be completed before the bill is reintroduced in the next Parliament session.

The Citizenship (Amendment) Bill, which had triggered massive protests across the Northeast, was passed by the Lok Sabha on January 8, but it had lapsed after failing to clear the Rajya Sabha hurdle in the Budget session of Parliament, the last before the general elections.
Tags Amit Shah Bharatiya Janata Party BJP Citizenship citizenship (amendment) bill Mizoram NRC Zoramthanga