The Aam Aadmi Party made history on Wednesday by winning the Delhi MCD election this year, ending the Bharatiya Janata Party's (BJP) 15-year rule. The AAP crossed the halfway mark around 2:15 pm and bagged 134 wards. The BJP emerged victorious on 104 seats, the Congress won nine, and independent candidates won three. The MCD has 250 wards, and the simple majority mark is 126. The BJP had been in power in the Delhi MCD since 2007. 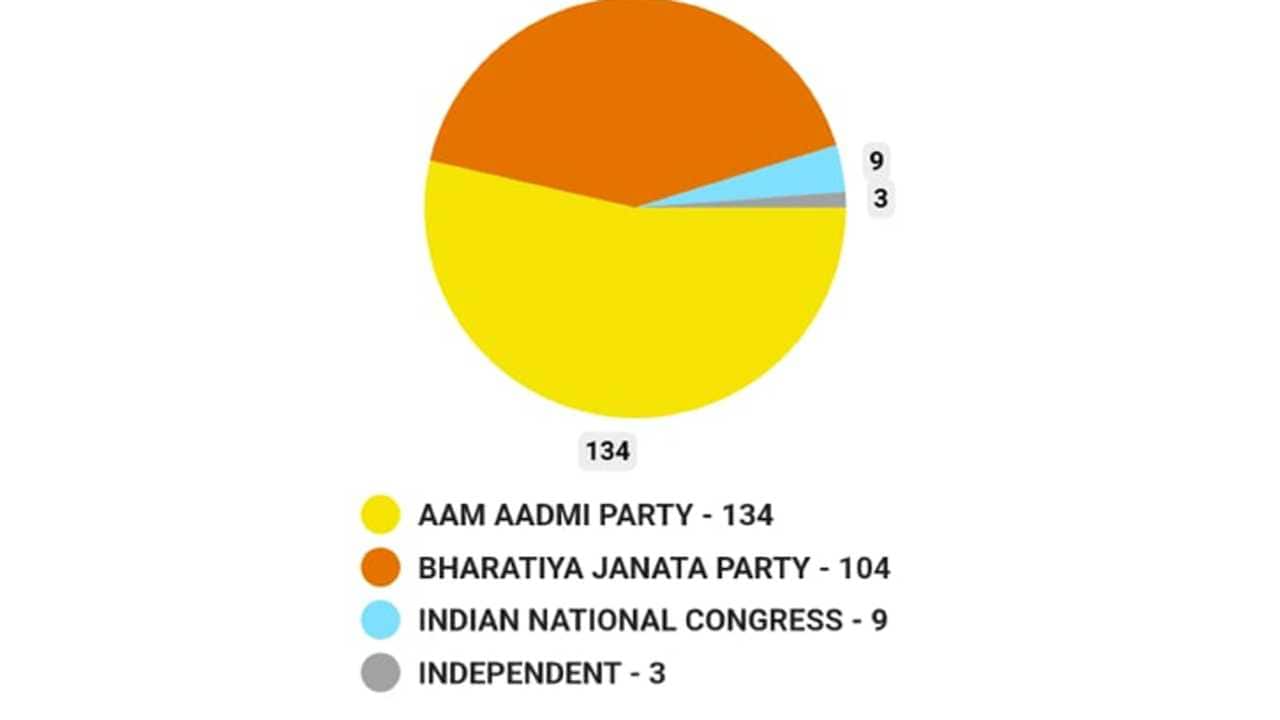 AAP wins Delhi MCD Elections 2022
Ahead of the results, AAP’s Saurabh Bharadwaj said a woman mayor would lead the Delhi civic body.
In his victory speech, Delhi Chief Minister and AAP national convener Arvind Kejriwal sought blessing from the Centre, "especially from Prime Minister Narendra Modi". He said he expects support from all the parties and the Centre to bring development to Delhi.
"We have to work together to improve Delhi," he said while congratulating Congress and BJP candidates who won the MCD polls. He pushed for 'positive rajniti' and emphasis his aim to fight corruption in the national capital while making India the No.1 country.
ALSO READ | What led to AAP's win in Delhi MCD polls 2022 — An analysis
Delhi Deputy Chief Minister Manish Sisodia thanked the people of Delhi for AAP’s win in the MCD elections. "Heartfelt gratitude to the people of Delhi for trusting Aam Aadmi Party in Delhi MCD..." he said. "By defeating the world’s biggest and most negative party, the people of Delhi have made a staunch honest and working Arvind Kejriwal ji win. For us, this is not just a victory. It is a big responsibility," he tweeted in Hindi.
This is the first civic election after the fresh delimitation exercise in Delhi - after three corporations of Delhi – NDMC, SDMC, and EDMC – were incorporated into the MCD, which formally came into existence on May 22. There were 272 wards in Delhi and three corporations: NDMC, SDMC and EDMC, from 2012-2022, before being reunified into an MCD.
In the previous civic elections in 2017, the BJP defeated the AAP and the Congress by winning 181 of 270 wards.
Click here to follow Delhi MCD Election Results Live Updates
Check out our in-depth Market Coverage, Business News & get real-time Stock Market Updates on CNBC-TV18. Also, Watch our channels CNBC-TV18, CNBC Awaaz and CNBC Bajar Live on-the-go!
Tags