Poster with the slogan "achche honge 5 saal; MCD mein bhi Kejriwal" were spotted in parts of Delhi ahead of the announcement of the results of the Municipal Corporation of Delhi (MCD) elections. Meanwhile, banners comparing Delhi Chief Minister and AAP chief Arvind Kejriwal with German leader Adolf Hitler have been put up in the city. The banner reads: "Kejriwal is second ruler who converted his city into a gas chamber, Hitler was first". The statement refers to the air pollution and degrading air quality in the national capital. 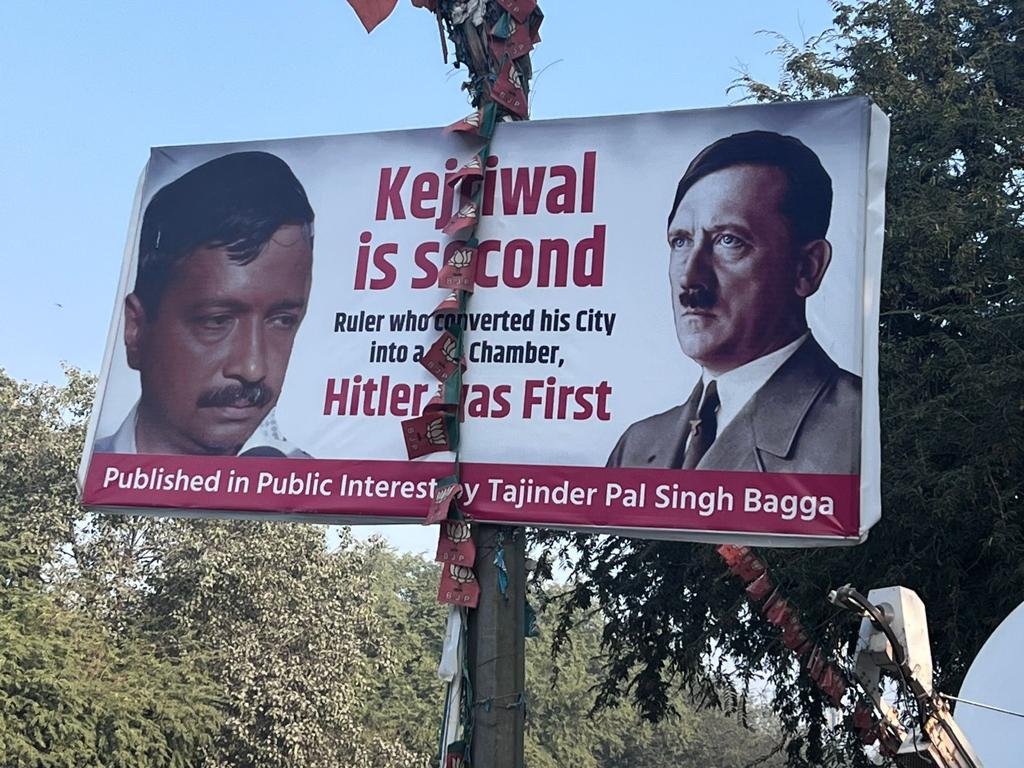 (Credit: Yatendra Sharma)
The AAP and BJP offices in Delhi are all decked up as the counting of votes is underway. Both parties are in a tight contest in the Delhi MCD elections 2022. Some visuals show the "AAP ready with a room full of balloons amid tight contest with BJP in Delhi civic polls".

The mood at the AAP office in Delhi  was seen celebratory on Wednesday morning with patriotic songs blaring through loudspeakers as the latest counting trends showed the party just inching ahead of the BJP in the MCD polls. Both parties are locked in a nail-biting contest. As of 12 noon, the AAP has won 75 wards while BJP has bagged 55. The AAP is also leading on 60 seats, followed by the BJP which is ahead in 48 wards.

Preparations for celebrations underway at #AAP and #BJP offices as both parties are locked in a nail-biting contest in #DelhiMCDPolls#ResultsWithNews18 #MCDElections2022https://t.co/EuJ8cEyhIV pic.twitter.com/xQ74PJUSv4

As the counting continues, a video shared by News 18 showed AAP workers breaking into a victory dance.

Most exit polls predicted a huge win for the AAP over the BJP with the Congress being a distant third. While the AAP had fielded 138 women candidates, the BJP and the Congress had nominated 136 and 129, respectively.
The high-stakes election to the 250 wards of the Municipal Corporation of Delhi (MCD) was held on December 4, sealing the electoral fate of 1,349 candidates in voting machines. An average voter turnout of 50.48 per cent was registered in the elections.
In the 2017 civic election, the BJP had won 181 of the 270 wards. Polling could not be held on two seats due to the death of candidates. The AAP had won 48 wards and the Congress 27. The voting percentage that year was around 53.
This year, the highest polling percentage (65.72) has been recorded in ward no. 5 (Bakhtawarpur), while the lowest (33.74 per cent) was registered in ward no. 145 (Andrews Ganj).
(Edited by : CH Unnikrishnan)
Check out our in-depth Market Coverage, Business News & get real-time Stock Market Updates on CNBC-TV18. Also, Watch our channels CNBC-TV18, CNBC Awaaz and CNBC Bajar Live on-the-go!