Delhi exit poll results HIGHLIGHTS: Exit poll survey results indicate that Arvind Kejriwal-led Aam Aadmi Party has advantage over its rivals — Bharatiya Janata Party and the Congress in today's Delhi assembly elections 2020, which ended on Saturday at 6 pm. The national capital recorded nearly 55 percent voter turnout. In 2015 Assembly polls BJP could manage to win just three seats, while the Congress couldn't open its account. The BJP is hoping it can repeat its stellar 2019 Lok Sabha performance when the party won all seven seats at stake under the leadership of Prime Minister Narendra Modi. In the Lok Sabha polls, the Congress emerged as the main challenger to the BJP, pushing the AAP to third position in many seats. The counting of votes and Delhi election results will be declared on Tuesday, February 11.

Times Now has given the AAP 44 seats in its exit poll results, while the BJP is likely to win 26 seats in the national capital. The Times Now exit poll survey has given nil seats to the Congress party.

The voter turn out for the Delhi polls was recorded at 54.65 percent till 6 pm. This is the first time is has dropped since the last election in 22 years. The voting for Delhi assembly elections has ended at 6pm, with those voters still in the queue allowed to cast their votes.

Of the 11 districts till 5pm, northeast Delhi recorded a turnout of 63.4 percent, the highest, while New Delhi saw 44.29 percent, the lowest.

#DelhiElections2020: Voting underway at a polling booth in Shaheen Public School in Shaheen Bagh. AAP's Amanatullah is the sitting MLA and 2020 candidate of the party, he is up against Congress's Parvez Hashmi and BJP's Brahm Singh Bidhuri. pic.twitter.com/URTFL7OpJq

Delhi recorded nearly 45 percent voter turnout in Delhi assembly polls till 5 pm. The voting began at 8 AM and will end at 6 PM.

Here's what Giriraj Singh said on AAP's allegations against him Union Minister Giriraj Singh on AAP alleging that he distributed money to influence voters: I had just gone to the shop to buy some stuff. The shopkeeper is a known person. It has been done to raise an issue of Bihari vs non-Bihari.
Share:

AAP fed biryani to one community, says Parvesh Verma BJP's controversial MP Parvesh Sahib Singh Verma is at it again. On polling day on Saturday, he alleged that the Aam Aadmi Party is arranging biryani for Shaheen Bagh protesters and as a quid pro quo, they are voting for the AAP.

"Delhiites, the media is saying the same thing which I was insisting upon so far. People from a certain community from Shaheen Bagh, Seelampur and Jamia Millia are standing in long queues to claim that they will vote for AAP. Why would they not? Aam Aadmi Party has been feeding them biryani for more than a month," Verma said in a video that he tweeted

The BJP MP also called it as a mode of "repayment of loan" given by the AAP. Addressing Delhiites as "Rashtravadi" and "Deshbhakt", Verma clearly implied that the protesters are not. "We won't let Delhi breakaway," he claimed. He ended his monologue with "Jai Shri Ram".

Verma, releasing this video on the day of polling, has already created concern within the opposition ranks. The EC has not yet reacted to this new video, but the tone, tenor and messaging of the video seems to be clear -- to polarise the voting in the second half of the day.

Delhi recorded nearly 43 percent voter turnout in Delhi assembly polls till 4 pm. The voting began at 8 AM and will end at 6 PM.

Voting for Delhi Assembly's 70 seats is being held from 8 a.m. till 6 p.m. The results will be out on Tuesday.

Delhi Chief Minister Arvind Kejriwal and Union minister Smriti Irani traded barbs on Twitter on Saturday after the AAP leader issued a "special appeal" to woman voters and asked them to discuss with men as to who could be the right choice for votes.

Irani, a BJP leader and Lok Sabha MP, took a swipe at Kejriwal, asking if he does not consider women capable enough to decide for themselves who to vote for.

"Must go to vote. A special appeal to all women. As you take care of your family, there is another responsibility on your shoulder which is of the country as well as Delhi. All women must vote and also take men of their family for it. You also must discuss with men who will be the right choice (for votes)," Kejriwal tweeted minutes before the polling for electing the Delhi assembly began.

Irani retorted, "Don't you consider women so capable that they could decide themselves who to vote for?" She also used a hashtag, projecting him as anti-women.

Kejriwal soon hit back at her, saying the women of Delhi have decided who to vote for.

"And this time in Delhi, women have decided their family's choice for votes. After all they have to run their household," he added.

Delhi recorded 30.18 percent voter turnout in Delhi assembly polls till 3 pm. The voting began at 8 AM and will end at 6 PM. 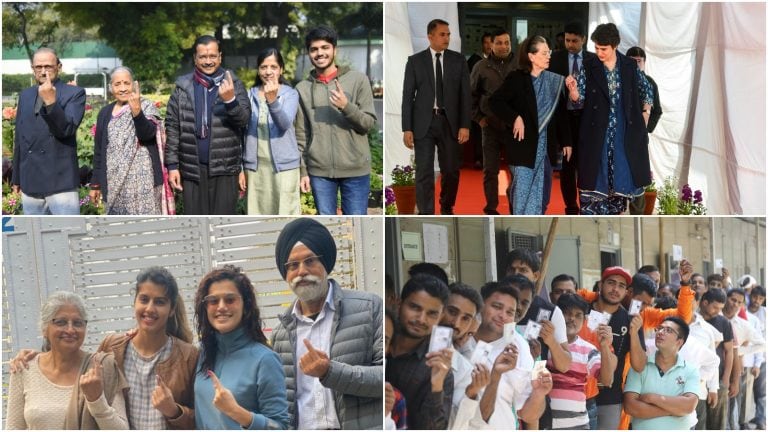 The polling in Delhi Assembly elections began at 8 a.m. amid tight security with long queues of people reported at several polling stations. There are 672 candidates in the fray to elect a new government.

Delhi has recorded an estimated 27.48 percent peaceful voter turnout till 2 pm on Saturday with 1.47 crore eligible voters expected to cast their votes in the election for the 70-member Delhi Assembly.

The early hours saw low polling as very few voters chose to brave the early morning chill to cast their franchise even after the polling began at 8 am in bright sunshine amid tight security. There are 672 candidates in the fray to elect a new government.

Delhi had recorded a voter turnout of 67.12 percent in the last Assembly polls held in 2015.

Before marriage, bridegroom comes out to vote in Delhi

Giving a message to voters in the national capital to come out and vote in the Assembly polls, a bridegroom from east Delhi on Saturday exercised his franchise on the day of his wedding and urged others to fulfil their responsibility towards the nation.

Dhananjay Dhyani, a bridegroom from east Delhi's Shakarpur area, that is also part of Laxmi Nagar Assembly constituency, came out to vote with his entire family.

Speaking to the media, Dhananjay, while standing outside MCD primary school polling booth here, said: "I have come out to exercise my franchise as I have a responsibility towards my nation. And I am fulfilling my duty towards the country."

He even called up his fiancee over phone to vote first and then come for the marriage.

He also said that his marriage is slated during the day and he will go for his marriage after casting his vote.

Appealing to others, Dhanajay said, "Everyone must come out and vote."

Delhi Chief Minister and Aam Aadmi Party chief Arvind Kejriwal on Saturday landed into hot waters after he suggested that women should heed their male counterparts' counsel while casting their vote.

"Don't you think that women are capable enough to decide on their own about whom to vote?" Irani tweeted in response with a hashtag #AntiWomenKejriwal.

As the #AntiWomenKejriwal started getting viral, Kejriwal responded to Irani and said that the women of Delhi have already decided whom they wanted to vote.

"Smritiji, the women of Delhi have decided whom to vote for. And this time in Delhi, women will decide the family's vote. After all they have to drive the home," the Chief Minister said. (IANS)

Delhi: Priyanka Gandhi Vadra, Robert Vadra and their son Raihan Rajiv Vadra who is a first-time voter, cast their vote at booth no.114 & 116 in Lodhi Estate. #Delhi pic.twitter.com/4wUQbioglL

Union Home Minister Amit Shah, who led a very aggressive campaign and covered 60 assembly seats, appealed to voters to "free" the national capital from lies and vote-bank politics. "By giving Delhi clean air, clean drinking water and every poor house, only the best capital of the world can make it a government with far-sighted thinking and strong intentions. "I appeal to the people of Delhi to vote to free Delhi from lies and vote bank politics," Shah tweeted.

Scuffle Breaks Out Between Alka Lamba, AAP Worker A scuffle breaks out between AAP and Congress workers near Majnu ka Teela after Congress candidate Alka Lamba tried to slap an AAP worker. AAP leader Sanjay Singh has said the party will complain to Election Commission. Alka Lamba, the Chandni Chowk MLA, had severed ties with AAP and CM Arvind Kejriwal after disagreements and a public spat. This time she contested the Delhi elections from Chandni Chowk after going back to Congress, the party she originally belonged to. (Source: News18.com)
Share:

Sonia Gandhi, who was discharged from the hospital after four days following stomach infection, arrived at a polling booth in central Delhi's Nirman Bhawan and exercised her franchise. This is the first time that Sonia Gandhi arrived to cast her vote without former Delhi Chief Minister Sheila Diskhit, who passed away last year in July.

Meanwhile, Congress General Secretary Priyanka Gandhi Vadra, the daughter of Sonia Gandhi, arrived at the polling booth in Nirman Bhawan to receive her mother. Priyanka Gandhi will exercise her franchise later in the day at Sardar Patel Vidyalaya polling booth at Lodhi Estate in central Delhi.

The Congress which ruled the city for 15 years from 1998 to 2013 is looking for a comeback in this election. The party was reduced to nil in 70 member assembly in 2015 polls, while the AAP had won 67 seats. The rest three seats were won by the BJP. Counting of votes will take place on February 11.

Over 15% voting recorded till noon in Delhi

Chief Minister Arvind Kejriwal on Saturday said he is hopeful that the Aam Aadmi Party would form government for the third time in Delhi. The people of Delhi will vote based on the work done by the AAP government, Kejriwal said after voting along with his wife Sunita and son Pulkit at a polling booth in the Civil Lines area. "Voted along with my family, including my first-time voter son. Urge all young voters to come out to vote. Your participation strengthens democracy," Kejriwal tweeted. Pulkit said he felt good after voting for the first time.

The voters of Neb Sarai, one of Asia's largest unauthorised colony in the national capital, came out in large numbers to exersice their right to choose their representative for the Delhi Assembly.

Beating the cold that continues to affect city, a long queue was seen outside the polling booth as voting began at 8 a.m.

Rahul Tyagi, 28, spoke to IANS, and said: "Voting is not only our right but is our most important duty too. This is the reason I have come right in the morning to vote."

Another resident Shweta, said, "Voting is the most important thing in the democracy, if we don't cast our vote, we would loose our right to complaint or criticise too."

The fight in the Delhi Assembly polls is between the Delhi CM Kejriwal led Aam Aadmi Party, the Bharatiya Janata Party and the Congress.