In about a month, the Northeastern state of Mizoram will elect new leaders to its state legislative assembly that completes its current tenure on December 15, 2018.

In about a month, the Northeastern state of Mizoram will elect new leaders to its state legislative assembly that completes its current tenure on December 15, 2018.

The stakes are high this time as Mizoram is the only north-eastern state, which has a Congress government since 2008 and the BJP, which is upbeat after ousting the CPI (M) from Tripura, is keen on making inroads in the Christian-dominated state.
The election to the 40-member state assembly will be held on November 28.
The Big Issues
Illegal Immigration: Mizoram, which has 722 kilometre long international border with Myanmar (404 km) and Bangladesh (318 km), may see illegal immigration as one of the most important issues in the upcoming elections. Various reports estimate illegal migrants at 10,000 in the state.
As per a Press Trust of India report last year, the BJP unit of Mizoram had urged the Congress government to identify and deport the illegal immigrants. In a similar instance last year, a group of major civil societies and student associations in a letter to the Prime Minister Narendra Modi urged to deport ‘Chakmas,’ a tribal community from Bangladesh.
Women-centric issues: Women voters have been outnumbering male voters in Mizoram for the past few years, but they are yet to get equal representation in Mizoram politics. The Mizoram Divorce Ordinance, 2008 promulgated by the state governor during the Mizo National Front (MNF) rule is still not formalised by the present government and it may give negative image to Congress.  In 2018, the Young Mizo Association (YMA), a powerful youth organisation in Mizoram, has demanded enactment of a law to ensure that any Mizo woman who marries a non-tribal loses her scheduled tribe status.
Unemployment: Unemployment is another important issue that plagues the state, which has a literacy rate of 91.85 percent, according to IBEF. As per Indiaspend, a non-profit organisation, rapid development as well as an advantage of English knowledge among the Mizos is not creating enough jobs and livelihood for the people. 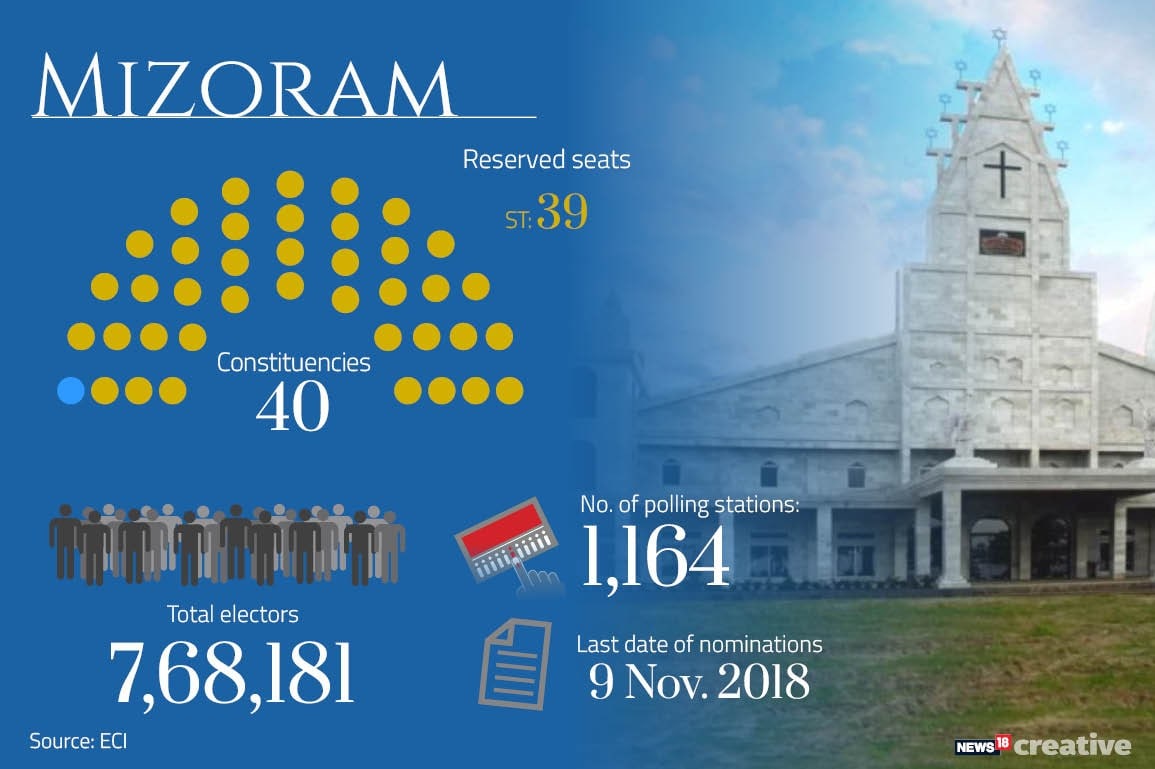 Development: Farmers account for around 70 percent of the total population of the state who practice the traditional ‘jhum’ or slash-and-burn cultivation method, wherein the land is cleared and the vegetation is burned to make way for new cultivable land.
Recently, thousands of farmers marched to Aizwal, the capital of Mizoram demanding land reforms and regulated system for sustainable development of farmers. Additionally, the centre has launched the North East Special Infrastructure Scheme (NESIS) to fill in the gaps in basic facilities, reported IndiaTV.
Infrastructure development: Monsoon season, heavy rains and lack of fund for maintenance are blamed for bad roads in Mizoram. Earlier, MNF had called for a 12-hour bandh in protest against inferior road conditions in the state. MZF senior vice-president Tawnluia had alleged that the bad road conditions in the state were due to corruption.
During a public meeting in Aizwal, last December, Prime Minister Narendra Modi stressed on the development of the Rih-Tiddim road and various rural ‘haat’ along the Mizoram-Myanmar which would help in increasing the trade among the neighbouring countries.
Bru refugee issue: The Bru refugee crisis also plagues the government as its decision to undertake the physical repatriation of over 32,000 Brus lodged in six relief camps in North Tripura district from the second week of February could not take off due to legal reasons.
Thousands of Brus had been lodged in the Tripura relief camps since late 1997 in the wake of a communal tension triggered by the brutal killing of Lalzawmliana, a forest guard, inside the Dampa Tiger Reserve on October 21, 1997, by Bru National Liberation Front (BNLF) militants.
Poverty rate: In Mizoram, about 20.40 percent of the population live under the poverty line, a report by IndiaTV said. One of the major reasons being the under-developed is state's agricultural practices.
The Voters Who Matter
A predominantly Christian and tribal dense state, majority of the voters belong to the Scheduled Tribes (ST), with as many as 39 out of 40 assembly seats being reserved for the STs in the state.
Mizoram voters list includes 7,59,519 electorates, an increase of 1.96 percent from the previous list, as per the Election Commission of India. Women voters outnumbered their male counterpart by 16,573. Total number of the female voters was 3,88,046 while that of males was at 3,71,473.
The Parties At Play
Congress: Mizoram is the only state in the Northeast region to have a Congress government in place for the past two terms (2008 and 2013) with chief minister Lal Thanhawla leading the assembly. The party has announced its list of 40 candidates for the upcoming assembly elections. Thanhawla will contest from the Champhai South (ST) and Serchhip (ST) seats -- both reserved for the Scheduled Tribe (ST) category.
However, in a setback for Congress, four legislators have resigned ahead of the election, which includes R Lalziriliana, the state home minister; Lalrinliana Sailo, former health minister; MLA Buddha Dhan Chakma and Hmingdailova Khiangte.
Internal squabbles and anti-incumbency are making the situation difficult for the Congress in Mizoram, which is expected to face a tough challenge from the MNF in the upcoming Assembly polls.
BJP: Kicking off the party’s campaign at Aizawl, party president Amit Shah had said Mizoram will celebrate Christmas under a BJP government. The BJP does not have any legislator in the 40-member Assembly. BJP leaders have been asserting that they would make all efforts to remove Congress from the power from the state to paint the whole Northeastern states with the saffron colour.
The saffron party has been making concerted efforts to win the state, after having formed governments on its own or joining hands with allies in all other Northeastern states. If voted to power, the BJP has offered to construct a four-lane highway across the state, linking both Myanmar and Bangladesh. Also, engineering colleges would be established at Lunglei and Champhai districts.
A report by News18 said BJP will contest against the MNF and the National People's Party in the polls, though they are constituents of North-East Democratic Alliance (NEDA). The NEDA is a political coalition formed in 2016 by the BJP.
MNF: The party asserted that it would not form an alliance with the BJP in the event of a fractured verdict in the November 28 assembly elections. The MNF declared that it would contest all the 40 seats in the upcoming election to the state legislature, but announced names of 39 candidates sans Tuichawng assembly seat within the Chakma autonomous district council (CADC) area.
National People's Party (NPP): The party announced it would contest the elections to the Mizoram legislative assembly. The NPP was launched in Mizoram by its president and Meghalaya chief minister Conrad Sangma on September 29. The party was founded in 2013 by veteran parliamentarian PA Sangma following his ouster from the NCP.
National Congress Party (NCP): The party said it would contest five of the 40 seats of the Mizoram Legislative Assembly. The NCP, which has been contesting Assembly polls in Mizoram since 2003, had not won a single seat in 2013 assembly poll.
The Past Elections
In the last state election in 2013, Congress won 34 out of 40 seats in the assembly. Mizo National Front and Mizoram People's Conference won five seats and one seat respectively.
Check out our in-depth Market Coverage, Business News & get real-time Stock Market Updates on CNBC-TV18. Also, Watch our channels CNBC-TV18, CNBC Awaaz and CNBC Bajar Live on-the-go!