Anti-Citizenship Amendment Protests LIVE UPDATES: Violent protests have taken place in different parts of the country after the Parliament passed the contentious legislation last week. At least three people were killed in police firing during protests in Assam, two others in Mangaluru and one in Lucknow. According to the CAA, members of Hindu, Sikh, Buddhist, Jain, Parsi and Christian communities who have come from Pakistan, Bangladesh and Afghanistan till December 31, 2014 and facing religious persecution there will not be treated as illegal immigrants, and be given Indian citizenship. This blog will keep you posted on the protests and demonstrations against the Citizenship Amendment Act today:

The government is open to accept suggestions, if any, from people who are staging protests against the Citizenship (Amendment) Act (CAA), a top official said on Friday.

The Home Ministry is preparing the Rules for the CAA in consultation with the Law Ministry that will indicate the process to apply for Indian citizenship by eligible refugees from Pakistan, Bangladesh and Afghanistan under the legislation.

"We are open to receive suggestions, if any, from anyone on the CAA. We are also trying to remove doubts of people about the CAA through various ways," the official said.

The central government was prepared to face protests against the CAA after its enactment by Parliament. "We had anticipated protests, at least in the Northeast," he said.

After supporting the Citizenship Amendment Bill's passage in Parliament, NDA constituent LJP on Friday has released a letter written to Home Minister Amit Shah where it asked for "discussion" on the matter.

In the letter, Lok Janshakti Party President Chirag Paswan said: "This Bill has long term consequences. Considering the importance of the Bill, I would urge you to urgently convene an NDA meeting on this and listen to all the concerns of all NDA allies. So that NDA come out as one on such an important issue."

The letter was written on December 6.

But ever since the Bill got passed and received presidential assent, there has been wide spread protest across india, even resulting in violence.

After a huge crowd had gathered at Daryganj in Delhi, Delhi Police has resorted to using water canons to disperse the protesting crowd. Meanwhile, scores of people have again gathered at the India Gate in Delhi to voice their dissent against the new citizenship law and a proposed countrywide National Register of Citizens (NRC). Raising slogans of 'Azaadi', 'No NRC, No CAA', the protesters, most of them college students, are demanding that the new law be repealed. Delhi Metro Rail Corp has closed two more stations, including Kashmere Gate and Central Secretariat. A total of 17 Delhi Metro stations have now been closed.

At least six government vehicles, including three MSRTC buses and a fire truck, were stoned by miscreants during protests against the Citizenship (Amendment) Act and the National Register of Citizens (NRC) in different parts of the state on Friday, officials said.

There are no reports of injuries in any incident, though police carried out a baton charge to quell the crowds in Beed.

At least three buses of Maharashtra State Road Transport Corporation, one with a few passengers inside, were pelted with stones, breaking their glass windows and damaging interiors, in Hingoli town and in Kalamnuri town.

Stationery buses were targeted by the stone-pelters in Beed and Nanded, a fire truck was stoned in Parbhani and there were incidents of minor violence from other areas. 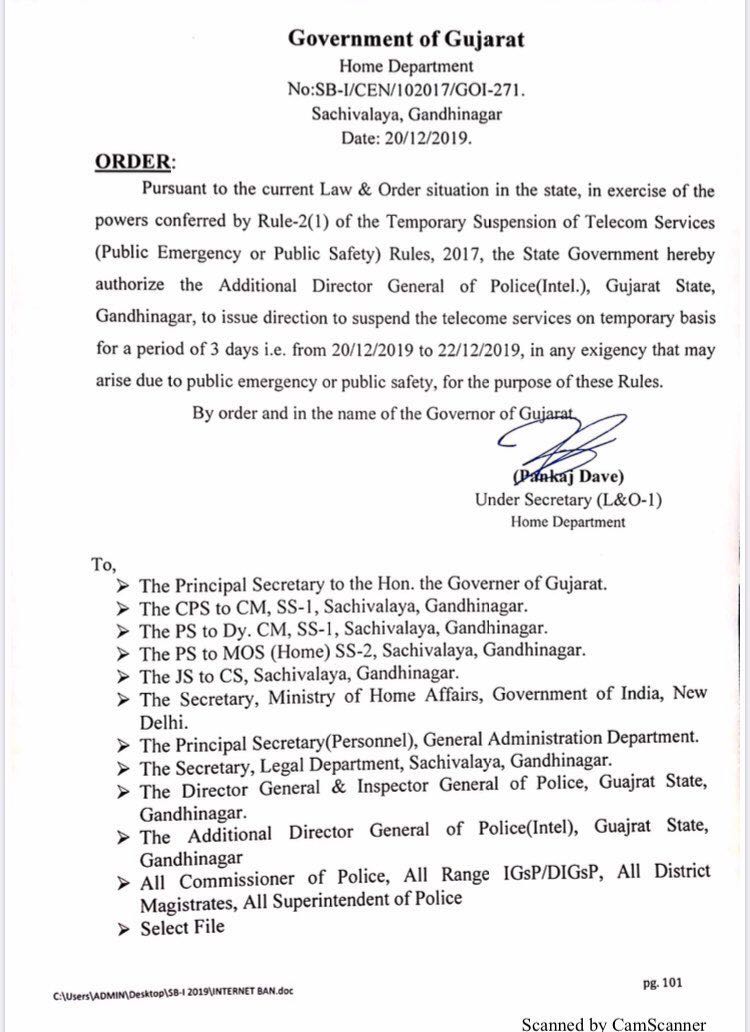 Anyone born in India before 1987 or whose parents were born before 1987 are bona fide Indian citizens according to law and need not worry due to the Citizenship Amendment Act, 2019 (CAA) or a possible countrywide NRC, a top government official said on Friday.

According to the 2004 amendments of the Citizenship Act, people of the country, barring those in Assam, whose one parent is an Indian and neither is an illegal immigrant are also considered Indian citizens.

The clarification came amid the protests against the CAA and the several versions being circulated in social media about the recently enacted law.

Those who are born in India before 1987 or whose parents were born in the country before that year are considered Indians under naturalisation as per the law, the official said.

In case of Assam, the cut of date for identification of an Indian citizen is 1971.

Cricketer-turned-politician Gautam Gambhir on Friday lashed out at human rights organisations and Bollywood A listers over the violent turn of many anti-CAA protests across the country where cops were beaten.

He tweeted on the micro-blogging site: "I think all human rights warriors, Bollywood attention seekers and pseudo-liberal journalists have gone to the UN to seek a referendum on whether policemen have human rights or not. Sick! #Gujarat #Lucknow #Delhi @MamataOfficial @ArvindKejriwal."

The Delhi Metro Rail Corporation on Friday closed the gates of 13 metro stations, including the busy Rajiv Chowk, to restrict the movement of anti-CAA agitators in the national capital, which has been witnessing protests against the Citizenship Amendment Act.

"Of the 285 stations, Chawri Bazar, Lal Quila, Jama Masjid & Delhi Gate on violet line, Jaffrabad & Maujpur-Babarpur on pink line and Jamia Millia Islamia on magenta line are closed as per instructions of security agencies. Rest of the metro network is operating as per schedule," the DMRC had tweeted.

In all, 13 metro stations are closed.

The Delhi Metro Rail Corporation on Friday closed the gates of three more stations, including Shiv Vihar, to restrict the movement of protesters in the national capital, which has been witnessing protests against the Citizenship Amendment Act.

"Of the 285 stations, Chawri Bazar, Lal Quila, Jama Masjid & Delhi Gate on violet line, Jaffrabad & Maujpur-Babarpur on pink line and Jamia Millia Islamia on magenta line are closed as per instructions of security agencies. Rest of the metro network is operating as per schedule," the DMRC tweeted.

In all, 10 metro stations are closed.

The Gauhati High Court on Friday dismissed a review petition filed by the Assam government against its order to resume mobile internet from Thursday evening. Though the Gauhati High Court ordered to resume the service from 5 pm on Thursday, the government did not issue any instruction to the mobile operators to implement it. Mobile internet services were restored in Assam on Friday morning, ten days after it was suspended to prevent misuse of social media during protest against the contentious amended Citizenship Act.

Firing has been reported from Uttar Pradesh's Bulandshahar as the protests against the amended citizenship law turned violent and stones throwing also took place, Several protestors and policemen are reported to be injured.

Earlier, protests against the amended citizenship law have turned violent in Uttar Pradesh's Kanpur, Firozabad and Hapur as well. Stone throwing was reported from Firozabad and vehicles have also been torched, while police resorted to lathi charge in Hapur.