Citizenship Act: From Lucknow to Hyderabad, protests across campuses against police crackdown in Jamia

Updated : December 16, 2019 01:19 PM IST
In Lucknow's Nadwa College, students gathered in the hundreds shouting slogans like "Awaz do, hum ek hain" (call us we are all united) as police tried to control the situation.
In Hyderabad's Maulana Azad Urdu University, students held a protest march post-midnight in solidarity with the Jamia students and demanded that their exams be postponed.
Students from the Tata Insitute of Social Sciences (TISS) in Mumbai also protested on the streets shouting slogans such as "Shame on Delhi Police".

Students from universities across India held demonstrations on Monday against the police crackdown on students of Jamia Millia Islamia university in New Delhi, who were protesting against the Citizenship Amendment Act, 2019. Students in several campuses, including in Hyderabad, Lucknow, Mumbai and Kolkata, came out in support of Jamia students.

Hundreds of students protested demanding an investigation into Delhi police's Sunday evening lathi-charge in the Jamia library and also against police entering the campus without permission from the varsity authorities.

At Jamia university campus, a group of Jamia students stood shirtless in the bone-chilling cold of a Delhi morning to protest the action against their colleagues on Sunday.

Slogans of "inquilab zindabad" were heard about 10 students, accompanied by their fellow colleagues, took out a small march, demanding a CBI inquiry into the "police brutality".

As a few women escorted an injured student to narrate their ordeal to the media, some people were seen asking them not to give any statements. 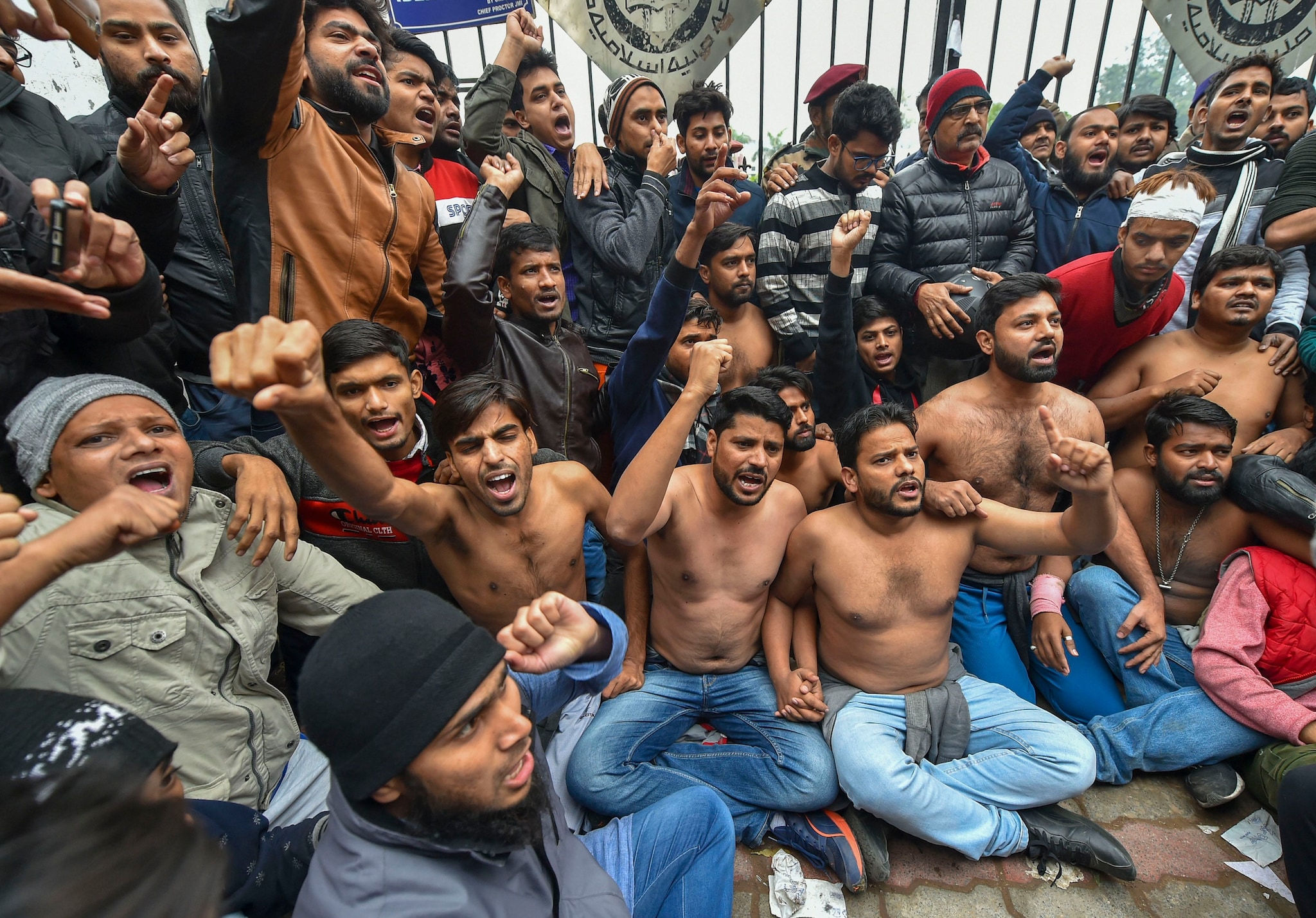 "We were inside the university when the police barged in. Around 20 policemen came from gate no 7 and 50 others came from the rear gate. We told them we were not involved in the violence. They didn't listen. They didn't even spare women," Khanzala, who suffered injuries to his legs and abdomen, told PTI in a statement.

Several Delhi University students boycotted exams to express their solidarity. They said they will gather at India Gate on Monday evening.

In Lucknow's Nadwa College, students gathered in the hundreds shouting slogans like "Awaz do, hum ek hain" (call us we are all united) as police tried to control the situation.

"Some students of the Nadwatul Ulama here tried to protest and hurled stones from inside. They were prevented and no one is allowed to come outside the campus," said Uttar Pradesh Director General of Police O P Singh. 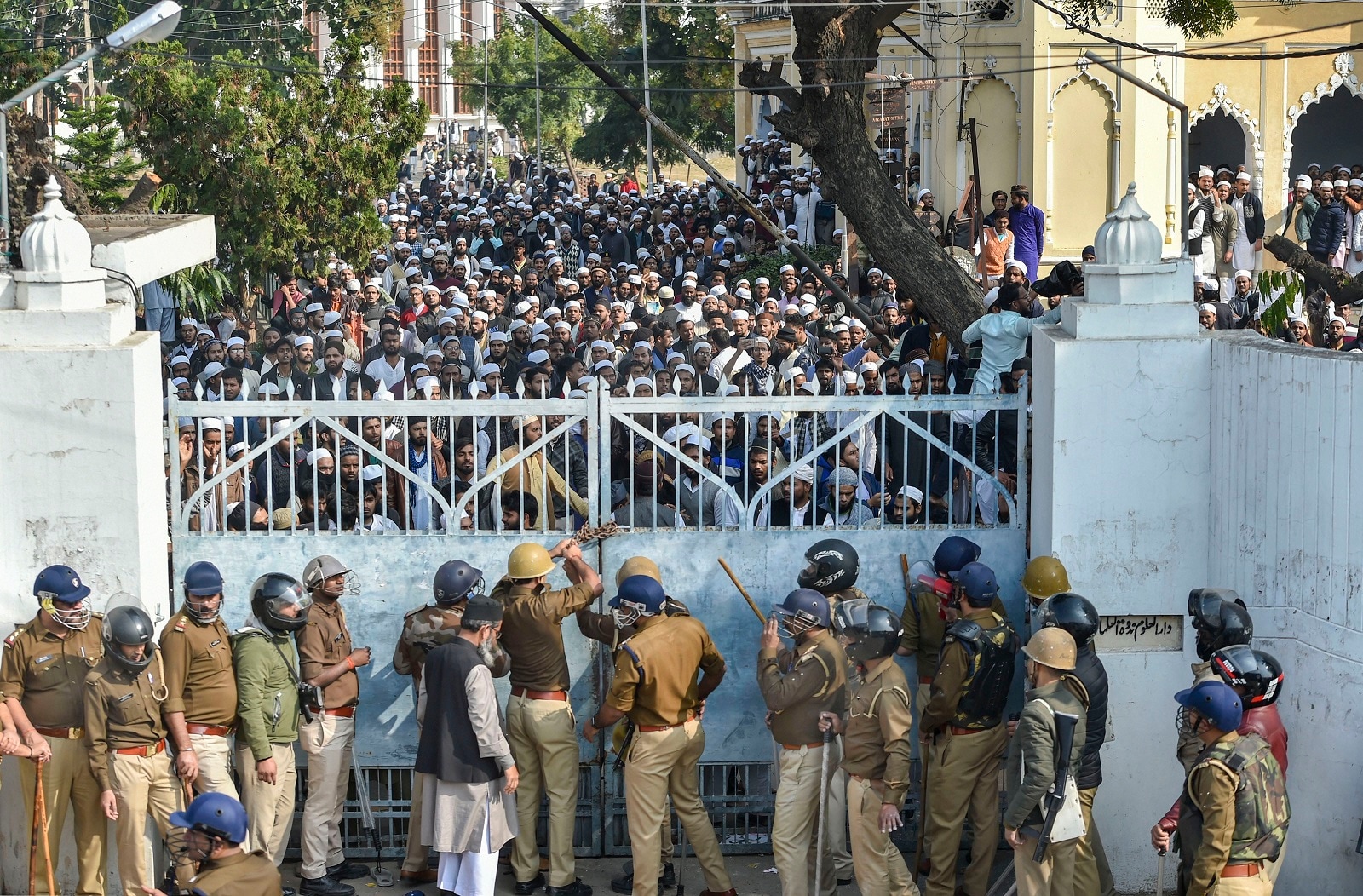 In Hyderabad, students from Maulana Azad Urdu University held a protest march post-midnight in solidarity with the Jamia students and demanded that their exams be postponed.

Demonstrations were also organised at the Banaras Hindu University (BHU) in Varanasi and at the Jadavpur University in Kolkata with demands that the government take action against police "hooliganism".

"Crackdown is a very small word to be used for what happened in Jamia yesterday. This is clear hooliganism. Videos of policemen smashing bikes and beating students are all over social media. The government must fix accountability for this," said a PHD student at BHU.

Ridhima Dua, a Jadavpur University student, asked how teargas could be used inside a closed compound.

"if I am molested on a street and go to the police to file a complaint I will be told about norms. Where are the norms now? How can teargas be used inside a closed compound? How can policemen just barge into the university without any permission from vice-chancellor? There has to be a probe in this," she said.

Students from the Tata Insitute of Social Sciences (TISS) in Mumbai also protested on the streets shouting slogans such as "Shame on Delhi Police".

Aligarh University University students were the first to join the protest against the violence in Jamia. There were clashes with the police late night on Sunday.

After the protest, the administration announced closure of the university till January 5 and students have been asked to evacuate the hostels. The students of Jawaharlal Nehru University (JNU) also joined their compatriots in Jamia outside the police headquarters at Delhi's ITO on Sunday night to protest the alleged police assault on students at the Jamia campus earlier in the day.