Chhattisgarh Assembly Elections 2018: Lack of jobs and farm crisis are the big issues

Updated : October 25, 2018 06:10 PM IST
Chhattisgarh, a part of the ‘Hindi-heartland' that has the majority of the population from the scheduled castes and tribal categories, will go to the polls on November 12 and November 20.
Tribals and dalits (broadly known as Satnamis in local parlance) constitute the majority of the votes in Chhattisgarh.
The critical issues that plague the people of Chhattisgarh are low-level corruption, unemployment and agrarian distress.

The bugle for the 2019 General Elections has been sounded, but before the ‘final’, there are the ‘semifinals’ as five states prepare for polls between November 12 and December 7.

Chhattisgarh, a part of the ‘Hindi-heartland' that has the majority of the population from the scheduled castes and tribal categories, will go to the polls on November 12 and November 20. Ninety seats are up for grabs. The main contest is between the Raman Singh-led Bharatiya Janata Party (BJP) and the opposition Congress. Former Congress leader Ajit Jogi’s Janata Congress Chhattisgarh would look to make it a triangular contest thanks to the recent alliance he stitched up with Mayawati’s Bahujan Samajwadi Party

State Of The Economy

Chhattisgarh’s economy is largely mixed, with agriculture forming the primary base. Fast growing manufacturing hubs have mushroomed around the state, particularly around the state capital Raipur. The state has made strides in iron and steel production, mining, cement and power plants along with rice mills.

Chhattisgarh earns the majority of its revenue from generating power, mining and making cement. The state’s gross domestic product (GDP) is valued at Rs 292,000 crore ($45.26 billion) in 2017-18.

Chhattisgarh is power surplus, one of those rare states that sells energy to its neighbours. The state had a total installed power generation capacity of 13,526.79 MW, comprising 9,014.30 MW under private utilities, 2,411.05 MW under state utilities and 2,101.44 MW under central utilities as of July 2018, according to India Brand Equity Foundation (IBEF), a government trust.

The state is a leading producer of minerals such as coal, iron ore and dolomite. It is also rich in bauxite reserves and accounts for 35.4 percent of the tin ore reserves in India. It also accounts for about 5.4 percent limestone reserves in the country, with the production reaching about 32.98 million tonnes in 2017-18.

Chhattisgarh stands fourth among Indian states in World Bank rankings on ease of doing business and reforms implementation, according to IBEF. The critical issues that plague the people of Chhattisgarh are low-level corruption, unemployment and the agrarian distress.

According to the World Bank, Chhattisgarh is one of the many states that ranks low on human development indicators.

People often have to bribe local officials to obtain a ration card to get subsidised food.

And there are no jobs. The unemployment rate will be one of the major focus in the approaching election as well, which will have 118,000 lakh voters added to the electoral rolls, according to an HT report.

About 2.5 million people have registered with various employment exchanges in the state, according to the Union ministry of labour and employment.

At least 1,500 farmers committed suicide in Chhattisgarh in the past three years, according to state government figures, the HT report adds. Government data show that 96 tehsils in 21 districts were affected by drought conditions in September 2017, it further added. The drought affected nearly 1.1 million farmers in the state, forcing many to migrate to urban places in search of livelihood. These farmers have also been protesting for minimum support price for Kharif crops such as rice as well as free electricity for water pumps.

The Voters Who Matter

Tribals and dalits (broadly known as Satnamis in local parlance) constitute the majority of the votes in Chhattisgarh. Traditionally, while the Congress party enjoyed strong support among tribals, it seems to have lost ground to the BJP largely due to Rashtriya Swayamsevak Sangh’s tribal outreach campaigns in the Bastar division and other tribal districts through associated social welfare organisations such as Vanavasi Kalyan Ashram.

BJP also draws good support from the state’s other backward castes like Kurmis, Telis, and Yadavs who dominate Chhattisgarh’s plains. The party is also popular among trading communities in urban areas.

Among Satnamis, Jogi is a big draw, particularly in the northeastern and eastern parts where the scheduled caste community has a strong presence. In recent years, BSP had made a dent in SC votes of both the big parties. The alliance between BSP and Jogi — the Communist Party of India (CPI) has also joined them — could upset the calculations of  the Congress and BJP in many seats.

Both the Congress and the BJP will try to woo farmers, which form the core of rural votes. After three consecutive terms, chief minister Raman Singh is likely to face anti-incumbency winds although the lack of a strong combined opposition in the state helps his party’s bid to retain power.

The party, however, faces heat over the aggravating agrarian distress. Farmers are complaining about broken promises made during the run-up to 2013 assembly elections, particularly with regard to the introduction of a minimum support price on Kharif crops that has not been met.

The Congress is in talks with the Gondwana Ganatantra Party (GGP) to prevent the division of anti-BJP votes in the state. As it so often happens, the Congress’ main worry is factionalism. Little surprise that the party has not named a chief ministerial candidate for the polls. Bhupesh Bhagel currently leads the Chhattisgarh Pradesh Congress Committee (CPCC) while TS Singh Deo is the Opposition party leader in the assembly. There are other sub-regional satraps like senior leader Charan Das Mahant. 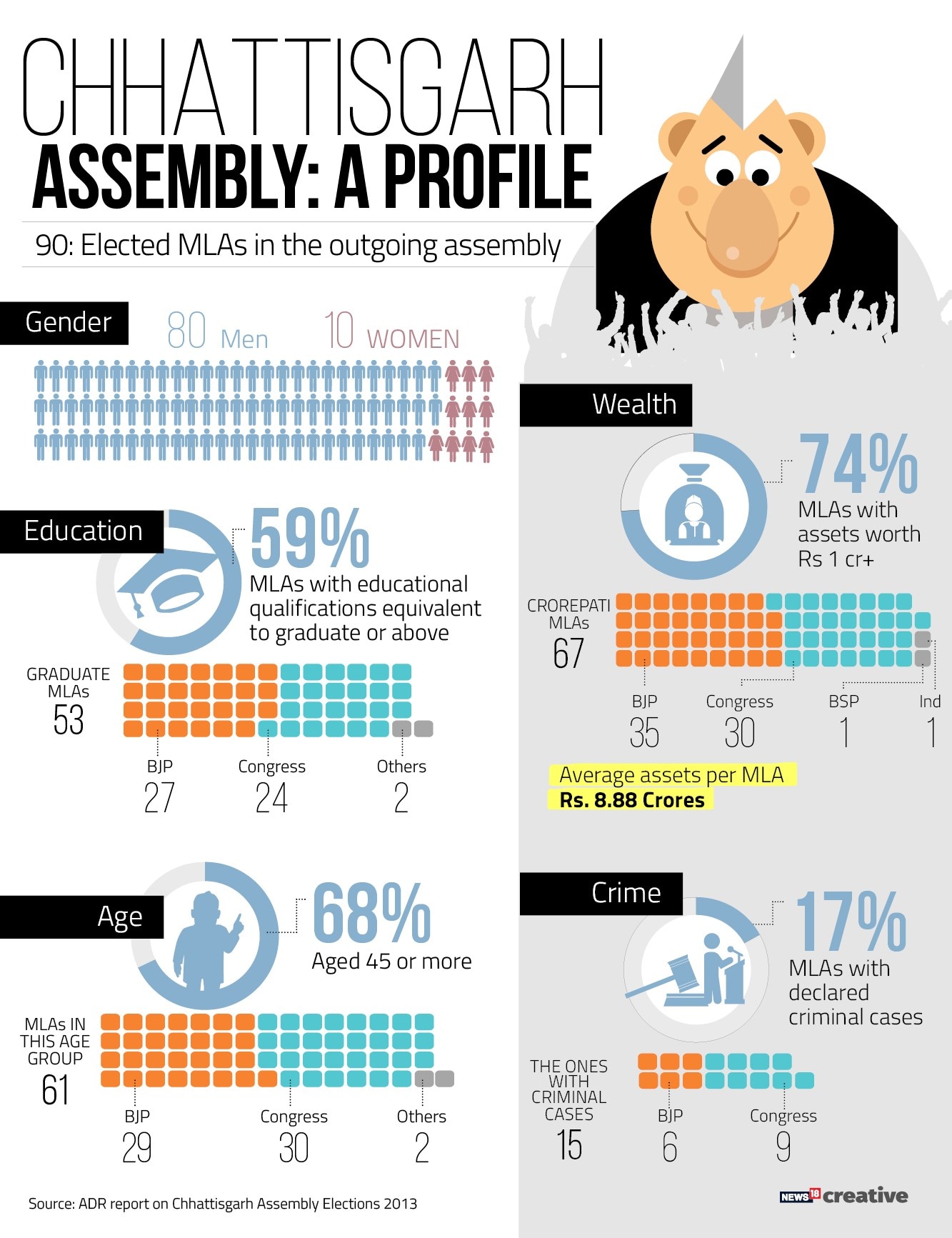 The Past Elections And Outlook For 2018

In the 2013 assembly elections, the BJP won the majority of votes with 49 out of 90 seats in the state legislative assembly and came to power right before the General Elections in 2014. The Congress won 39 seats, while BSP won one seat.

The Congress has been roundly defeated in the past three elections. With polls only a few weeks away, Congress’ working president Ramdayal Uikey jumped ship to join BJP again.