There is no reason why Pakistan could not have been an economic power house – a new nation, a new beginning, tremendous goodwill at the start – and they blew it all on an obsession.

India abrogated Article 370 and 35A, that gave the state of Jammu and Kashmir special status within the Indian Union, on August 5. Simultaneously, the state was bifurcated into two union territories – Jammu and Kashmir, and Ladakh. State leaders, opposition voices in the state were taken into custody, and there has been a news and communication clampdown in much of the Kashmir part of the union territory since that time. It is difficult to judge what the people think, because apart from propogandists parroting “all is well”, there have disturbing stories of hardship and alienation trickling out. However, there is no such problem in terms of understanding what the Government of Pakistan thinks, because since August 5, they seem to be thinking of nothing else but Kashmir.

If you look at Pakistan, they have enough problems of their own. Their external debt stands at $105,841 million
–37.5 percent of their GDP. Imran Khan inherited the debt problem from earlier leaders who hawked their nation to China in return for giant infrastructure projects – the key among which is the China-Pakistan Economic Corridor (CPPEC) that has seen a number of Chinese-led infrastructure projects dot the Pakistan landscape. Debt often seems the easiest way of building fast and better, but the problem with debt – as many Indian companies have also found it -- is that it has to be repaid. Right now, Pakistan doesn’t seem to have the ability to pay back. Pakistan is borrowing money to just avoid default on interest payments. And, there seems to be no hope in sight. 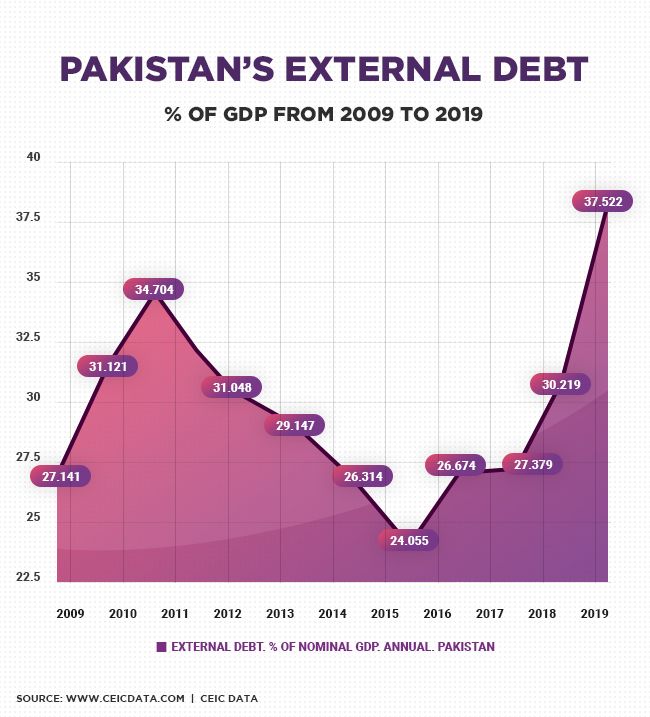 Add to this Pakistan’s internal economy, and their woes multiply. It’s fiscal deficit is 8.9 percent -- with government revenues declining, and their expenditure not showing any signs of shrinking. Last year, facing tremendous pressure to live within their means, the Pakistan government cut back on social development. The Public Sector Development Programme (PSDP) saw its budget slashed by over Rs 1.6 trillion – with 450+ projects being impacted – as Pakistan tried to make ends meet. The economic woes of the country are so acute, that even the military agreed to slash its rather hefty budget – but that was before India abrogated Article 370.
Pakistan has been obsessed with Kashmir. It believes that Kashmir belongs to it. And, it has spent the last 72 years trying to make sure that it puts this obsession ahead of any development. There is no reason why Pakistan could not have been an economic power house – a new nation, a new beginning, tremendous goodwill at the start – and they blew it all on an obsession. No sooner than Pakistan was created, it sent tribesmen to take control of Jammu Kashmir, that had quite the opposite effect. The kingdom acceded to India. For the next 70 years, this obsession has become the raison d'être of Pakistan. They have spent billions of dollars, that could have gone to making their own state a better place, into fuelling a permanent sense of instability in the entire region.
While one expected Pakistan to have a view on what happens in Kashmir, one did not quite expect them to derail at what happened. It is almost like the abrogation of Article 370 has unbalanced the Pakistani leadership, and they are almost frothing at the mouth, when they talk about the internal affairs of another country. As India gets diplomatic backing on Kashmir – with most world leaders keeping various degrees of mum – Pakistan is more isolated than ever.
Its role as a haven for terrorists, arms dealers, black marketeers, money launderers and other unsavoury types, has come home to bite. Recently the Asia wing of the Financial Action Task Force (FATF) – which looks at illegal money flows across the world  -- has downgraded Pakistan and placed it on a black list. This is at a time when Imran Khan desperately needs to prove to the world that Pakistan can be trusted with money.
For India, Pakistan is an irritant next door. Someone we have to deal with, simply because we cannot move continents to get away from them. Despite the horrors of partition, the wars, the skirmishes, the blood-letting and the rhetoric, no Indian leader has obsessed about Pakistan or any part of it, for longer than a few minutes. Pakistan, on the other hand, seems to think more about India and what the Indian government is doing than focusing on the interests and development of the people of Pakistan. And, that seems totally irrational, not to mention strange.
For Pakistan, to grow, to develop and provide a better quality of life for its citizens it needs to reset its priorities. It needs to focus on the rights of its people, not ours. Kashmir is an Indian issue, it is ours to solve. Pakistan doesn’t have a role to play. Pakistan needs to realise that.
Harini Calamur writes on politics, gender and her areas of interest are the intersection of technology, media, and audiences.
Read Harini Calamur's columns here.
Check out our in-depth Market Coverage, Business News & get real-time Stock Market Updates on CNBC-TV18. Also, Watch our channels CNBC-TV18, CNBC Awaaz and CNBC Bajar Live on-the-go!