Bihar elections 2020 LIVE: This is my last election, says Nitish Kumar during an election rally in Purnia

Bihar elections 2020 LIVE: This is my last election, says Nitish Kumar during an election rally in Purnia 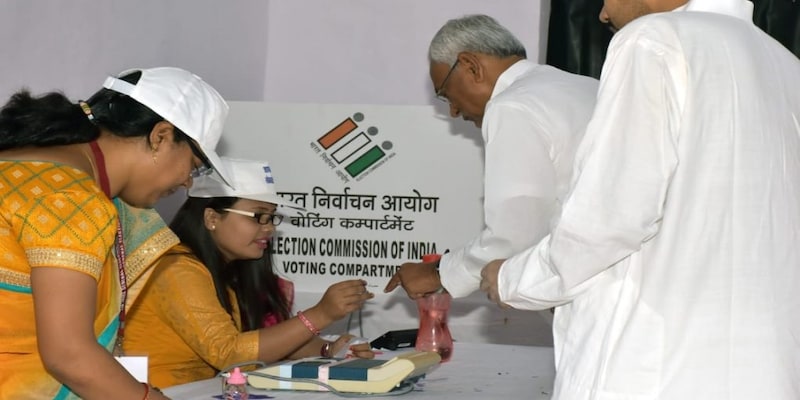 Here are the highlights from the Bihar assembly polls 2020 and bypolls in Madhya Pradesh, Gujarat, Karnataka, Chhattisgarh and Uttar Pradesh

The second phase of polling on 94 seats in the Bihar assembly elections passed off peacefully on Tuesday with a voter turnout of over 54.64 per cent, marginally lower than the 2015 figure, as COVID-19 failed to dampen the democratic spirit of citizens.

The second round of the voting was held in the 17 districts amid tight security and strict coronavirus guidelines in place.
The voting percentage was 54.64 (as on Tuesday night), according to the Election Commissions Voter Turnout Apps provisionally data. The polling percentage is likely to go up as the poll panel updates the figure with more inputs from these constituencies.
Here are the highlights from the Bihar assembly polls 2020:

This is my last election, says Bihar CM and JD(U) Chief Nitish Kumar during an election rally in Purnia#BiharElections2020 pic.twitter.com/Hthwem3XmS

It is certain that Mahagathbandhan (of Congress & RJD) will form govt in the state. It's time for development in Bihar: RJD leader Tej Pratap Yadav. #BiharElection2020 pic.twitter.com/xVhtfQeEiw

#BiharElection2020 RJD leader Tej Pratap Yadav who is contesting from the Hasanpur seat in the Bihar assembly elections, says, "The public wants a change in Bihar. I appeal to people to cast their vote." pic.twitter.com/Y1funZAJMZ

Bihar: RJD leaders Tejashwi Yadav and Rabri Devi arrive at polling booth number 160 in Patna to cast their vote in the 2nd phase of #BiharElections.

Sonipat: BJP candidate for by-election to the Baroda assembly constituency, Yogeshwar Dutt cast his vote at a polling booth in Bhainswal Kalan

He says, "This time people would vote for development."#Haryana pic.twitter.com/jyWBcesYBk— ANI (@ANI) November 3, 2020

said. Polling began at 7 am and will end at 6 pm, while adhering to the COVID-19 restrictions, the official said. The last hour of voting will be for COVID-19 patients and people suspected to be suffering from the disease.
Authorities have set up 250 flying squads, 173 surveillance teams and 293 police check-posts to ensure smooth polling, he said. Altogether 355 candidates, including 12 ministers, are in the fray, the official said, adding around 33,000 security personnel have been deployed in 19 districts. There are 63.67 lakh voters in the 28 constituencies and 9361 polling booths, including 3038 booths placed under the critical category, he said.
The death of Sira MLA B Satyanarayana, who was from the JD(S), and the resignation of RR Nagar Congress MLA Munirathna from the assembly last year led to the bypolls. There are 1,008 polling stations, comprising 678 in RR Nagar and 330 in Sira, Chief Electoral Officer Sanjiv Kumar said in a statement.

Bihar: Social distancing norms being followed as voters stand in queues at polling booth no. 325 & 326 in Patna to cast their votes for the second phase of #BiharElections. pic.twitter.com/QXzgDOM0cs