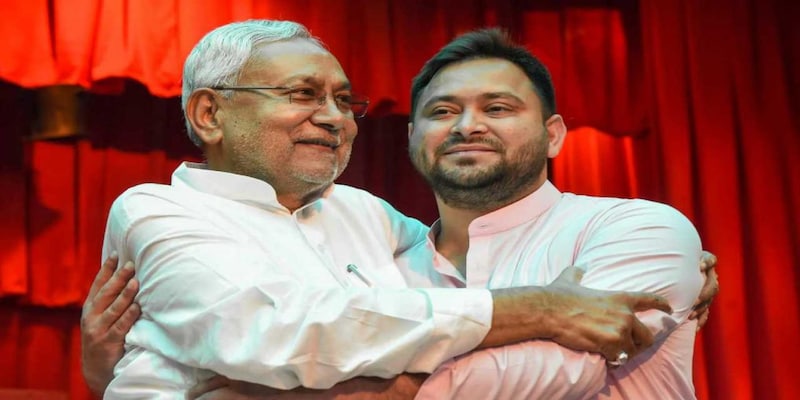 The state cabinet can have up to 36 ministers, including the Chief Minister. The RJD, which is the largest party in the state assembly, got the lion's share of ministerial berths, followed by Kumar's JDU.

The two-member Bihar Cabinet comprising Chief Minister Nitish Kumar and his deputy Tejashwi Prasad Yadav was expanded on Tuesday, with the induction of 31 new faces from different constituents of the 'Mahagathbandhan' (Grand Alliance). While 17 MLAs from Rashtriya Janata Dal took the oath, Janata Dal United's 10 MLAs, Congress - two and one each from Hindustan Awas Morcha and an independent were inducted into the Nitish Kumar government.

The swearing-in ceremony took place at 11.30 am inside the Raj Bhavan. RJD's Tej Pratap Yadav, elder brother of Tejashwi Yadav took the oath. In all 17 MLAs from Other Backward Class, six from Scheduled caste category, and six from upper caste were sworn in today.

The state cabinet can have up to 36 ministers, including the Chief Minister.The RJD, which is the largest party in the state assembly, got the lion's share of ministerial berths, followed by Kumar's JDU.
The JD(U) retained most of its ministers in the previous NDA government including Vijay Kumar Chaudhary, Ashok Choudhary, Bijendra Yadav, Shravan Kumar and Leshi Singh. It dropped a few who have been deemed to be close to the BJP and former JD(U) president RCP Singh, accused of trying to split the party at the ex-ally's behest.

"The portfolios will be allocated shortly. I will hold a meeting of the entire cabinet today once again," Kumar said after the cabinet expansion.
The Congress got two ministerial berths. Afaque Alam and Murari Gautam were handpicked as part of the party's strategy to back a Muslim and a Dalit.
In addition, Hindustani Awam Morcha's Santosh Suman sworn in as a minister. The party, founded by his father and former CM Jitan Ram Manhi, has four MLAs. The lone Independent Sumit Kumar Singh, whose late father Narendra Singh was an old associate of the chief minister Kumar, had been made a minister in the previous government also took oath.
Here's the full list of new inductees
With inputs from PTI
Check out our in-depth Market Coverage, Business News & get real-time Stock Market Updates on CNBC-TV18. Also, Watch our channels CNBC-TV18, CNBC Awaaz and CNBC Bajar Live on-the-go!