Voting for Bihar assembly elections will be held in three phases on October 28, November 3 and November 7 in one of the biggest elections globally during the COVID-19 pandemic, followed by counting of votes on November 10, the Election Commission announced on Friday.

Announcing the poll schedule for the 243-member Bihar assembly, Chief Election Commissioner Sunil Arora said voting will begin as usual at 7 am but the period will be extended by one hour until 6 pm, except in the Left Wing Extremism-affected areas, so that COVID-19 patients can vote in the last hour of the day.

"The world has changed significantly since the last major election in our country, which was held for Delhi assembly, and the COVID-19 pandemic has forced a new normal in every aspect of our life.

"Bihar assembly polls will be one of the biggest elections globally to be held during prevailing COVID-19 situation," Arora said.

He also said special protocols have been readied for voters who are COVID-positive patients. Announcing the poll schedule at a press conference in New Delhi, Arora said the number of phases for 243-member Bihar assembly polls has been reduced keeping in mind security arrangements and festive season, among other factors.

Besides, postal ballot facility will be provided wherever required and requested.Social distancing norms will need to be followed at public gatherings during the poll campaign.

Arora further said anyone using social media for mischievous purposes, such as for flaring communal tension, during elections will have to face consequences, while hate speech will be also dealt with harshly by the Election Commission. "COVID-19 patients who're quarantined will be able to cast their vote on the last day of poll, at their respective polling stations, under the supervision of health authorities. This is beside the option of the postal facility already extended to them," CEC Arora.

“To further decongest polling stations and allow more free movement of voters, polling time has been increased by 1 hour. It'll be held from 7 am-6 pm, instead of 7 am-5 pm earlier. However, this will not be applicable to Left-wing affected areas,” the CEC said.

“As we talk, the Model Code of Conduct (MCC) stands enforced with this announcement. The Commission has already made elaborate arrangements for ensuring the effective implementation of MCC guidelines: Chief Election Commissioner,” Arora said. 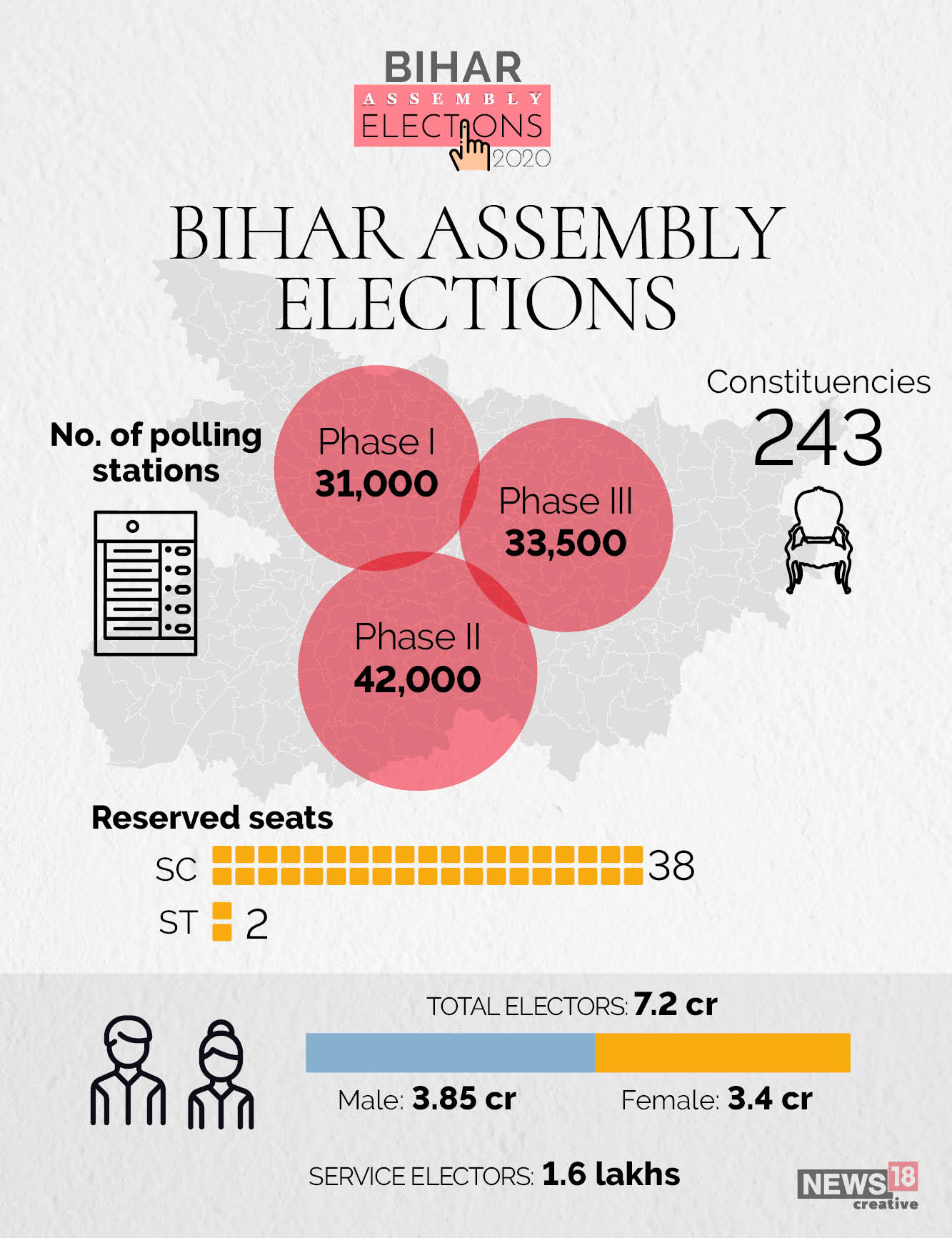 On bypolls for one Lok Sabha seat and 64 assembly constituencies, Arora said the Election Commission will take a decision after a meeting on September 29 where issues raised by some states on timing of polls would be discussed and a press release should be issued subsequently the same evening.

The notification for the first phase of Bihar assembly elections would be issued on October 1, while last date of nominations would be October 8 and withdrawal of candidature can be done till October 12.

For the second phase, notification would be issued on October 9, nominations can be filed till October 16 and candidature can be withdrawn till October 19.

The third-phase notification would be issued on October 13, the last date of nominations would be October 20 and the last date for candidature withdrawal has been fixed October 23.

The number of people accompanying a candidate for submission of nomination has been restricted to two, while door-to-door campaign can have maximum five people including the candidate.

Arora further said there are about 18.87 lakh migrants across 38 districts of Bihar, out of which 16.6 lakh are eligible to vote. While 13.93 lakh already had their names on the electoral rolls, 2.3 lakh more have been registered and the the process is still on, he added.