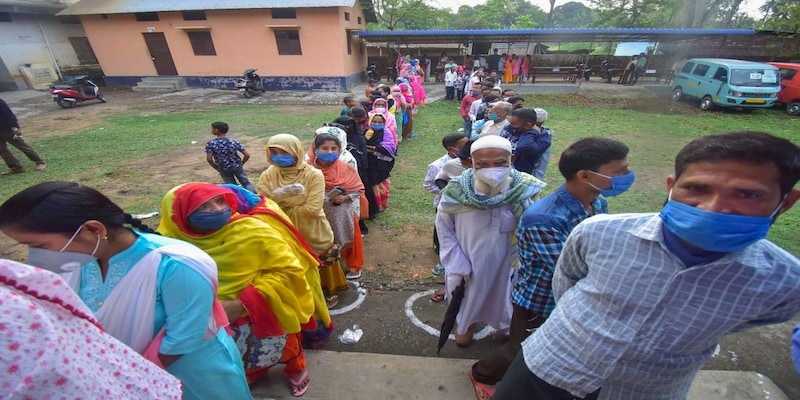 A total of 690 assembly constituencies across the five states will go to polls this time, Chief Election Commissioner (CEC) Sushil Chandra said. Elections will be held for 403 assembly seats in UP, 117 in Punjab, 70 in Uttarakhand 60 in Manipur, and 40 in Goa, he added.
A total of 18.34 crore citizens, including service voters, will take part in this election. Of these, 8.55 crore are women, the CEC said.
In the first phase of elections on February 10, Uttar Pradesh voters will cast their ballot. In the second phase, in addition to UP, Punjab, Uttarakhand, and Goa will poll their votes on February 14.
The third and fourth phases of voting will take place in Uttar Pradesh on February 20 and February 23. Polling will take place in Manipur and UP in the fifth and sixth phases on February 27 and March 3. The seventh and last phase will cover the remaining constituencies in Uttar Pradesh on March 7.
Counting of votes will be done on March 10 and the poll result will be announced subsequently.
EC has been working towards ensuring COVID-19-free elections and therefore, new protocols will be in place in order to conduct the poll exercise. In view of the pandemic situation, only 1,250 people, down from 1,500, will be allowed at a polling station at a time, the CEC said.
Also Read | EC announces assembly elections 2022 in UP, Uttarakhand, Punjab, Goa and Manipur: what's at stake in upcoming polls
“All polling stations will be equipped with COVID-mitigation facilities including sanitisers and masks,” CEC said. Moreover, the polling time will be increased by an hour.
Chandra announced that no roadshow, padyatra and physical rallies will be allowed till January 15. He has appealed to political parties to campaign using digital mediums and avoid physical mediums, he added. ECI will review its ban on physical election rallies after January 15, he said.
Also Read | EC reviews COVID, law and order situation in poll-bound states, stresses on need for vaccinations
It is going to be a hike stake battle in Punjab, where the Congress is looking to retain power but there has been a lot of chaos in the northern state due to infighting in the grand old party. Former Chief Minister Amarinder quit his post and exited the party last year and launched a new political party Punjab Lok Congress. His party has forged an alliance with the Bharatiya Janta Party to contest the 2022 Punjab assembly elections. The seat-sharing arrangement and if and who will be other members of the alliance haven’t been revealed yet.
Follow Assembly Elections 2022 poll schedule announcement LIVE Updates here
(Edited by : Kanishka Sarkar)
Check out our in-depth Market Coverage, Business News & get real-time Stock Market Updates on CNBC-TV18. Also, Watch our channels CNBC-TV18, CNBC Awaaz and CNBC Bajar Live on-the-go!