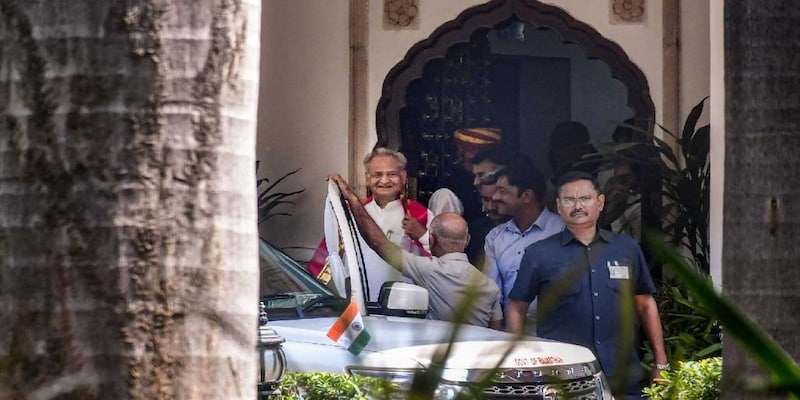 On being asked if he will remain Rajasthan CM, Gehlot said, "I won't decide that, Congress chief Sonia Gandhi will decide that."

"I won't contest these elections in this atmosphere, with moral responsibility," said Gehlot after meeting party Gandhi at her residence today. During the meeting, the Congress president is likely to express her unhappiness over the developments in Rajasthan, party sources said.
Gehlot, a three-time state chief minister, described himself as a disciplined soldier of the party and expressed his sadness over the turn of affairs in the state. On being asked if he will remain Rajasthan CM, Gehlot said, "I won't decide that, Congress chief Sonia Gandhi will decide that."
Hectic parleys have been underway since last week after 90 Rajasthan MLAs, loyal to Gehlot, submitted their letters of resignation to the Speaker as former deputy chief minister Sachin Pilot was seen as the main contender for the top post. These MLAs also refused to meet Congress observers for Rajasthan Mallikarjun Kharge and Ajay Maken and instead held a meeting among themselves.
"One-line resolution is our tradition. Unfortunately, a situation arose that resolution was not passed. It was my moral responsibility, but despite being a chief minister I could not get the resolution passed," said Gehlot.
The process for filing nominations for the election started on September 24 and will end on September 30. The date of scrutiny of the nomination papers would be October 1, while the last date of withdrawal of nominations would be October 8.
The election, if there is more than one candidate, will take place on October 17, while counting of votes, if necessary, and the counting of votes and the declaration of results would be on October 19.
Check out our in-depth Market Coverage, Business News & get real-time Stock Market Updates on CNBC-TV18. Also, Watch our channels CNBC-TV18, CNBC Awaaz and CNBC Bajar Live on-the-go!