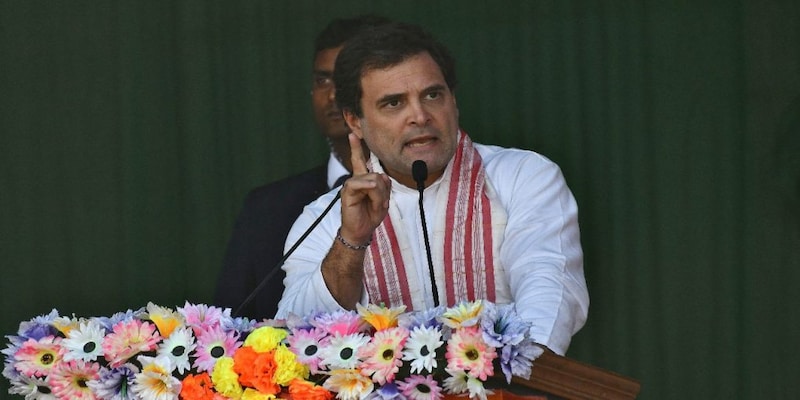 During his visit to London, Rahul Gandhi met Corbyn on May 23 along with Congress leader Sam Pitroda

Congress leader Rahul Gandhi’s interaction with Britain’s Labour Party leader Jeremy Corbyn in London has stirred a row back home. The Bharatiya Janata Party (BJP) has hit out at the Wayanad MP for allegedly endorsing the Corbyn’s ‘anti-India’ views.

Rahul Gandhi met Corbyn on May 23 along with Congress leader Sam Pitroda.
Ire against Corbyn
Once UK’s opposition leader and leader of the Labour Party, Jeremy Corbyn is known to be a divisive politician who is accused of fostering views which are widely perceived to be against India and pro-Pakistan, especially on Kashmir issue. The veteran leader has been accused of sympathising with Hamas terrorists and harbouring anti-Semitic sentiments.
ALSO READ: Congress is losing elections as well as talent and the problem is getting worse
What the BJP said
Following Gandhi’s meeting, Law Minister Kiren Rijiju took to Twitter to criticise the former Congress chief’s move for going against his own country.
Sharing Gandhi’s photo with the UK MP, Rijiju asked: “For how long and how much one can go on against one's own country?"

For how long and how much one can go on against one's own country? pic.twitter.com/74KgaeZKBB— Kiren Rijiju (@KirenRijiju) May 24, 2022

Another BJP leader Kapil Mishra asked what Gandhi was doing with a man “infamous for his anti-India, anti-Hindu stand”. Mishra reminded his followers that Corbyn openly advocated for the separation of Kashmir from India.
Highlighting Corbyn’s visceral dislike for India, IT cell head Amit Malviya said Gandhi found an “overseas collaborator”, who “denigrates India with the same impunity as him”.
How the Congress reacted
The Congress hit back at the ruling party by sharing an old picture of the Labour leader meeting Prime Minister Narendra Modi and asking if PM Modi too endorsed Corbyn’s ‘anti-India’ views.
Congress chief spokesperson Randeep Surjewala said in the past political leaders with divergent and opposite views have met and will continue to do so in the future.
“If this is the criteria, our media friends should also debate why did the PM go to Pak to meet the then PM, Nawaz Sharif?” Surjewala tweeted.
He also took the reference of Modi's public interactions with economic fugitives Nirav Modi and Mehul Choksi and said the PM has in the past addressed Choksi as “Humare Mehul Bhai” in a public forum.
Rahul Gandhi’s meeting with a person holding divergent views “is neither a crime nor an act of terror”, the Congress spokesperson said.
ALSO READ: Pradhan Mantri Jan Dhan Loot Yojana: Rahul Gandhi's dig at govt over fuel price hike
(Edited by : Sudarsanan Mani)
Check out our in-depth Market Coverage, Business News & get real-time Stock Market Updates on CNBC-TV18. Also, Watch our channels CNBC-TV18, CNBC Awaaz and CNBC Bajar Live on-the-go!