With 30 becoming new 50, buy health insurance while young and healthy

Updated : September 24, 2019 12:05 PM IST
Indians are 10 times more likely to die of heart disease than the rest of the world.
Nearly 20-40 per cent of young people in India suffer from health-impacting conditions that need urgent medical attention.

Today, diseases, disabilities and death have all stopped showing affinity merely towards the elderly as they are inflicting the young adults equally.

A few weeks back, Manu Sharma, who works as an applications engineer with an IT firm in Gurugram had a near-death experience. He went to bed looking forward to the next day but woke up suddenly early in the morning around 4 am. On waking up, he realised that his left hand’s ring and little finger had gone numb and he was facing difficulty in breathing. He thought it was not serious and decided to visit a doctor later in the day. On visiting the doctor, 32-year old Sharma, who thought he was in best of his health was informed that he had actually suffered a heart attack. On detailed examination it was revealed that two of the valves in his heart had blockages. Manu was immediately admitted and treated for coronary angioplasty. Manu Sharma was lucky to get away but everyone is not so lucky.

As per a recent study, Indians are 10 times more likely to die of heart disease than the rest of the world. People in India now are getting heart attacks at a much, much younger age. The most unfortunate fact is that 40 per cent people in India developing heart-related ailments are under the age of 50. And it’s not just the heart-related ailments that affect Indians severely.

In the last one decade, the frequency of diabetes and other life-threatening ailments has sky-rocketed across the country. It is a matter of great concern that problems like stroke, depression, stress, diabetes, cancer and heart attacks which were initially seen mostly in older adolescents, are now being encountered by young adults. Nearly 20-40 per cent of young people in India suffer from health-impacting conditions that need urgent attention of healthcare professionals.

The total number of cases of cancer are expected to increase from 15 lakh in 2017 to over 17.3 lakh by the end of 2020. This means that by the end of 2020, every Indian family will have at least one cancer patient. Doctors attribute nutritional disorders, stress, pollution, tobacco use, harmful alcohol use and other substance use as some of the important factors leading to youngsters getting such serious health issues. With rising incidents of such deadly diseases in young adults, it seems 30 is the new 50 – as diseases which people usually used to encounter in their 50s are now encountered by them in their 30s.

India’s growing inflation rate is a matter of great concern as most people in India are deprived of even the basic health care facilities. India’s healthcare inflation has been rising gradually and more alarmingly. The average healthcare inflation was 7.14 per cent for 2018-19, witnessing a steep rise from 4.39 per cent in the year 2017-18.

With medical inflation rising at the rate of over 50 percent ever year, it is imperative to invest in a comprehensive health insurance with adequate sum insured. Moreover, with serious ailments striking adults as early as at the age of 30-35, it is time people start realising the importance of health insurance. At this stage of life, one cannot afford to drain a major part of the savings in treatment of a particular disease and it is important to stay financially protected by investing in an adequate health insurance policy.

It is also better that one buys a comprehensive health insurance cover before turning 30 as in most cases, health insurance policies come with a predefined waiting period of 30 to 120 days, during which one cannot make a claim for planned hospitalisation or even during a medical emergency.

Moreover, investing in a health insurance policy at a young age ensures that you have greater coverage. Many latest health plans offer wide coverage for young customers that include day care procedures and treatment for vector borne diseases to maternity benefits and cover for OPD expenses among others. These days, insurers have come up with several high value insurance policies with sum insured up to Rs 1 crore. Whether you're married, single, have children, young or old, you need some level of health insurance to protect yourself against financial disaster in the event of a serious illness or accident. Whether you choose a group plan or an individual plan, there are important choices to be made that will affect not only the quality of your medical care coverage but also your wallet.

The following is a comparative table of five leading insurance companies providing health insurance cover of Rs 10 lakh sum assured for a 30-year-old male who earns between Rs 5 to 7 lakh annually and lives in a metro city. 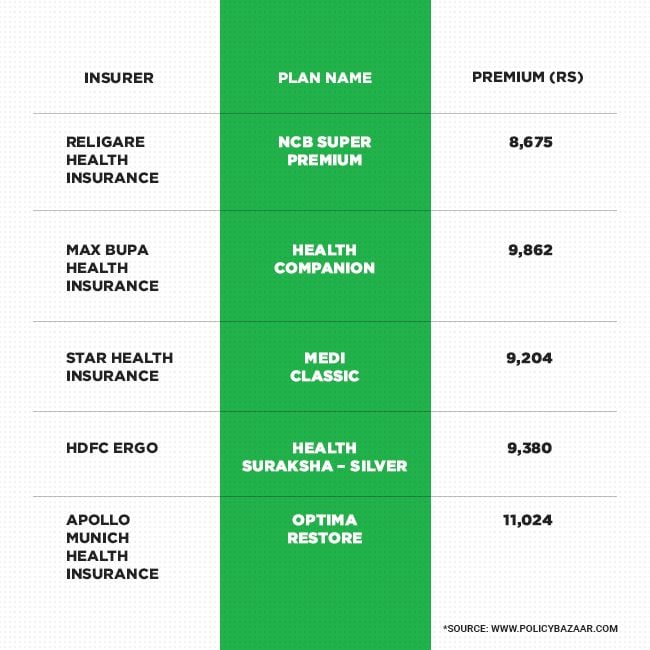