Updated : August 29, 2019 01:17 PM IST
The task force recommendations, if taken up by the government, will boost consumption and give relief to the middle income group.
According to the proposed changes in the personal income tax rates, the task force has recommended "to continue with the minimum exemption limit of Rs 2.5 lakh per annum.
It has also suggested continuing with the tax rebate announced in the interim budget for those with an income of up to Rs 5 lakh per annum.

The task force on simplification of direct tax legislation has recommended major changes in personal income tax slab. According to highly placed sources, the "task force has proposed changes to boost consumption and to give relief to middle income group."

The current tax slab is: 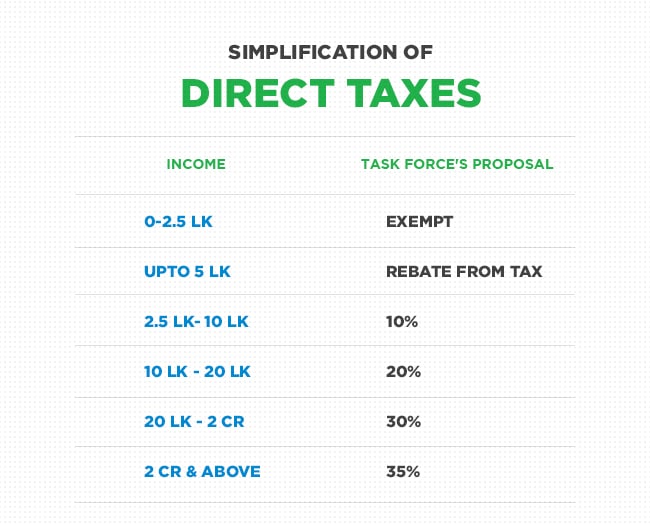 The task force has proposed these changes in tax slab based on the analogy that "studies conducted on sensitivity of consumer spending to changes in tax rates indicate that marginal propensity to consume could increase significantly with reduction in tax rates, particularly in middle income group."

The task force also believes that the new slabs, if adopted by the government, will provide a relief to people in the income bracket of Rs5-Rs10 lakh and Rs10 lakh - Rs 20 lakh, sources said.

"If the new rates are adopted by the government then people can save up to Rs 1.5 lakh per annum in their tax outgo," sources said.

After working for more than 21 months and conducting 90 meetings, a task force led by Central Board of Direct Taxation member Akhilesh Ranjan has submitted its recommendations to simplify the current direct tax legislation to Finance Minister Nirmala Sitharaman on August 19.

"The task force feels that the new slabs will encourage people to save more especially those in the brackets of Rs2.5 lakh- Rs10 lakh and Rs10 lakh - Rs20 lakh per annum which will boost both savings and consumption" sources added.

"The new rate of 35 percent for those with Rs 2crore ​and above income will also reduce effective rate for high net-worth individuals," sources said.

The task force was formed to made recommendations to replace the 58-year-old Income Tax Act, is aimed at simplifying income tax provisions and improving tax certainty.

The task force report is yet to be made public and it is believed that Finance Minister Nirmala Sitharaman has sought time to go through the report before making it public.

The government is in full authority to accept or reject the recommendations made by the task force.

Talking to CNBC-TV18, Mukesh Patel, a member of the task force, on August 19 had expressed that "Our task force has been given a number extensions, which are justified as we had to submit a full-fledged bill. Today, we discussed the nitty-gritties and niceties of the bill and its objectives."

"The government would study it before it is put in the public domain. When it unveils, every tax payer of India would be keen on paying taxes and every tax professional would proudly say that we have an efficient tax system," he said.