Updated : October 27, 2019 01:18 PM IST
Credit Suisse Global Wealth Report released on Monday showed that 759,000 Indians have wealth over $ 1 million, up from 725,000 millionaires in 2018.
In a welcome news for the economy, India moved from 77th to 63rd position in World Bank’s Ease of Doing Business rankings.
A SPIVA report shows that over the one year period ending June 28, 2019, 76.67 percent of Indian equity largecap funds and 80.95 percent of Indian Equity Linked Saving Scheme (ELSS) Funds underperformed compared to their respective benchmarks. 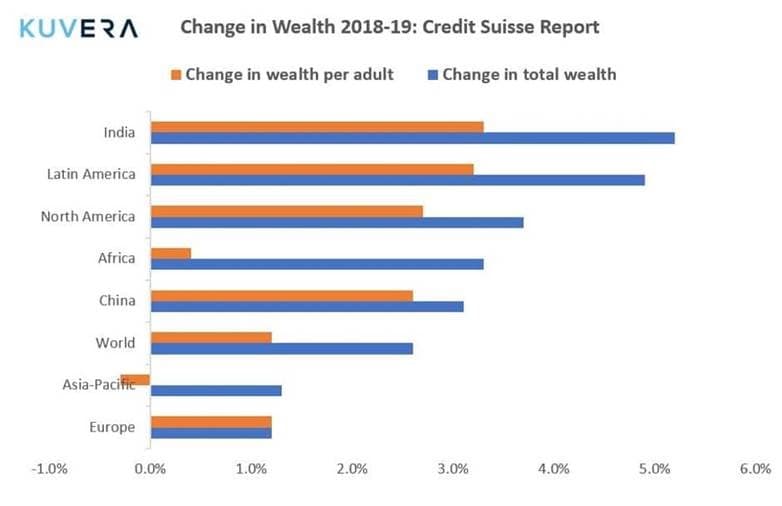 As per the report, Indians hold an average of about $13,000 in physical assets and roughly $3,000 in financial assets. Debt per adult comes to $1,345. The report also projects total wealth in India to grow by 43 percent over the next five years.

In a welcome news for the economy, India moved from 77th to 63rd position in World Bank’s Ease of Doing Business rankings. India’s ranking has consistently improved from 142nd in 2014 to 63rd in 2019. The government had earlier set a target of becoming one of the top 50 countries in the ease of doing business rankings by 2020.

A nation's ranking on the Ease of Doing Business Index is based on the average of the following ten criteria:

SPIVA (S&P Index vs Active) published the mid-year report for 2019 this week. SPIVA studies the performance of active managers against benchmark indices all over the world. Their India report includes a ten-year comparison of index versus active funds in the Indian mutual fund landscape. John D. Rockefeller Jr.: The secret of success is to do the common thing uncommonly well.