All that you need to know about mutual funds last week

Indian Auto Sector continues to go through a rough patch as passenger vehicle sales declined by 31 percent in July, this was the steepest decline since December 2000.

Multiple OEMs (Original equipment manufacturer) including Tata Motors, Hero Motocorp and Mahindra & Mahindra have announced shutdown plans for a few days. This if anything, should serve as a reminder of how hard it is to invest in sector funds. 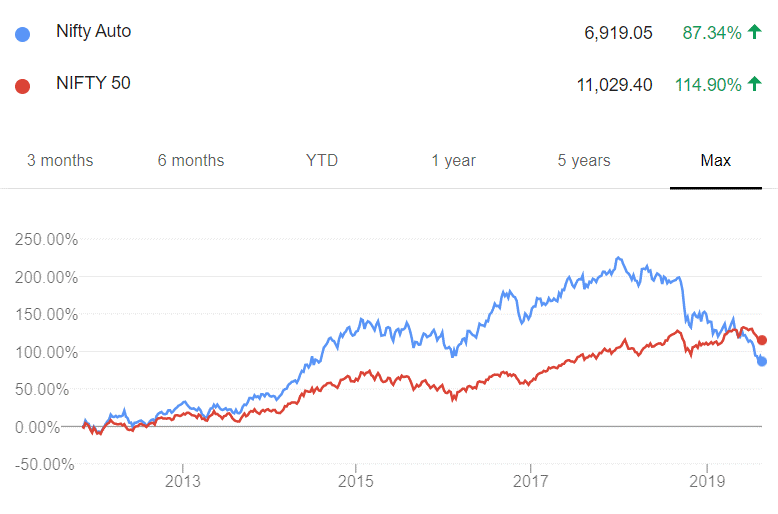 The chart above tracks the performance of the Nifty Auto Index vs the Nifty 50 Index. Going back to 2011, from when the data is available, the return on Nifty Auto is below that of Nifty 50. If you chased returns in the auto sector and invested in 2016 / 17 after 3-5 years of good performance, you are probably down a significant amount in this sector.

As always we recommend not to invest in sector funds or funds that have high sector allocations. Sector timing is as hard, if not harder, than market timing. And more likely than not you will fall into the "behaviour gap" in sector investing - i.e buy the hype and eventually sell in the downturn.

Capital markets were gripped by concerns about a recession after the U.S. Treasury 10y - 3m yield curve temporarily inverted on Wednesday for the first time in 12 years. Let's dig a bit deeper into what it means by yield curve inversion. It simply means that the longer-dated government securities (5y or 10y) are yielding lower than the shorter-dated government securities (3m and 2y). So the 10y - 3m yields are negative instead of being positive, as they usually are.

While there is no accepted theory on why a yield curve inversion leads to recession, it has so happened that the 5 times that the 10y - 2y US treasury yield curve has inverted it has led to a recession.

The sample size at 5 historic observations is too low to make any meaningful statistical inference. Add to that the lack of any credible theory on why yield curve inversion leads to recessions, you should take all such news with a pinch of salt.

Our views stay rock solid - ensure that your goal-based asset allocation is right, and be the best at your day job. As Walt Disney once famously said -

I’ve heard there’s going to be a recession. I’ve decided not to participate

We saw the most inflows in these 5 Funds –

We saw the most outflows in these 5 Funds –

3/ Essel Mutual Fund has designated Kamlesh Dixit and Niraj Singh as key personnel of Essel AMC, with effect from 12 August 2019.

The function of economic forecasting is to make astrology look respectable