4G Ulip: A story of a bad guy turned good

4G Ulip: A story of a bad guy turned good

Ulips were more financially rewarding to the agents because of the fees involved.

Once a product lacking in transparency and high on charges, Unit Linked Insurance Plan (Ulip) in its latest avatar, the fourth generation (4G), is a story of a bad guy that has turned good.

Like all such stories, this good guy (read: 4G Ulip) is today struggling to get acceptance of the society and despite its makeover continues to be misunderstood among the masses, owing to the ghosts of its past.
In my first column for CNBCTV18.com, I thought I need to narrate this story because when we founded PolicyBazaar.com back in 2008, our endeavour was to create an online platform for easy comparison that promotes transparency in the industry plagued by high incidences of mis-selling then.
In short, we wanted to educate consumers about good and bad products. Ulip of then was a product that wasn't high on transparency, was costly and lacked flexibility.
In fact, because of such products, we came into existence.
Earlier, we never sold that product. But today, I strongly endorse this product because it has changed for good, has become cost-effective, consumer-friendly and deserves a second chance.
Let me rewind back and tell you the story of Ulip, which had undergone four major transformational phases that has helped it become a good guy today.
ULIPs Before 2010: More Lucrative to Distributors Than Customers
Unveiled as a market-linked investment option that guaranteed an additional cover, Ulips were then more financially rewarding to the distributors and agents because of high front-loading charges and fees involved.
Sales of Ulips brought in high commissions for distributors that also resulted in their rampant mis-selling. To lure the customers in buying Ulips at par with short-term investment options, distributors made customers believe that the investment included paying premiums for only three years.
The customers were never explained the importance of long-term investments because of which they limited paying premiums only for three years in most cases, instead of continuing to pay for the full policy term that could help them earn good returns.
Dissension against investment in Ulips surfaced after the customers found that the premium they had paid had gone mostly into disbursement of commissions charged by the agents.
Falling markets and loss in the net fund value gradually led to the reputation of Ulips dwindling down and consequently giving rise to high number of policy lapses.
Ulips in 2010: IRDAI Clamp Down on Exorbitant Charges
The format of high commissions had led the distributors to pitch the product falsely. This led the Insurance Regulatory and Development Authority of India (IRDAI) to formulate and execute necessary guidelines in a bid to protect the policyholders’ interests.
The regulations aimed at educating customers about the significance of prolonged investment into Ulips and bringing down charges associated with the product swung into effect in September 2010.
The regulator limited the charges on all kinds of unit-linked contracts including those with tenure of less than 10 years, 10 years or those exceeding 10 years.
The enactment of the guidelines resulted in the capping of Ulips' charges, increase in lock-in period of it to five years, instead of three years and rise in minimum protection cover to roughly 10 times the yearly premium paid.
The intent behind raising the amount of minimum cover then was to ensure an adequate insurance cover to the policyholders, while the extended lock-in period helped protect their financial interests.
The regulator also put forth that the net reduction in yield for Ulip policies with policy term less than or equal to 10 years shall not exceed 3% at maturity. For Ulip policies bought for a period exceeding 10 years, the net reduction in yield at maturity must not be more than 2.25%.
From 2015 to 2017: The Turnaround
Till 2015, most Ulips worked more or less in the same fashion. The turnaround came with HDFC Life Click2Invest unveiled sans the policy administration and policy allocation charges.
The rest of the costs inclusive of mortality charges and fund management charges were limited to roughly 1.8%. A similar plan, SBI LIFE-eWealth Insurance capped its premium allocation charges to Rs 45, reduced its policy administration charges to zero while the total cost of the product is limited to 1.52% to 1.8%.
2017: Entry of 4G Plans
Despite necessary changes being brought in by the regulator and stiff competition changing the way how Ulips operate, customers still feel apprehensive to invest into Ulips that gives dual benefits of insurance cover and market-linked returns.
The insurance companies have now introduced fourth generation of Ulip, by turning them into zero-commission products coupled with loyalty bonus and additional allocation opportunities.
The fund management charge is today as low as 1.35%, and the products are structured in a manner which makes them highly competitive in comparison with mutual funds, both in terms of returns and charges.
Below is the brief tables highlighting five year returns of different plans. 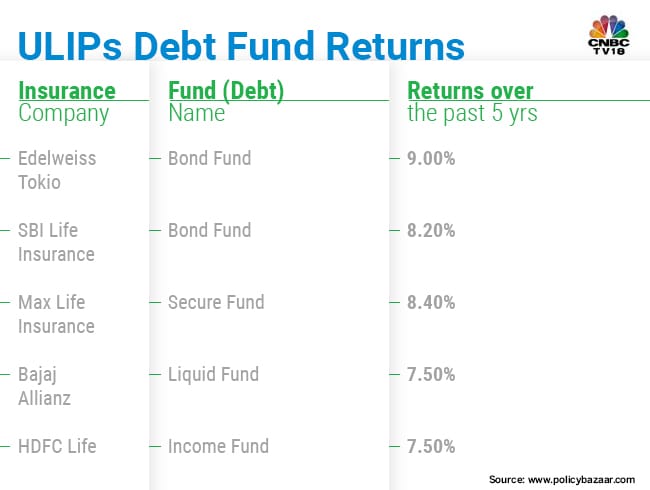 Data updated on April 16, 2018.
The Long-Term View
Today's Ulip, including all kinds of charges, is far more cost-effective and tax efficient than a mutual fund. And these are not one-off products but a number of Ulips — Edelwise Tokio Wealth Plus, Bajaj Allianz Goal Assure, Max Life Online Savings Plan — which currently exist in the market.
If you buy a mutual fund from the market, you can pay as high as 2.25-3% cost, whereas these products have fund management charges of as low as 1.35%. That’s nearly 1% lower and more, and let me just make you understand what difference this 1% can make.
For a consumer, if you are putting Rs 1 lakh per year for 10 years, you would probably accumulate around Rs 20-25 lakh. This 1% is Rs 20,000-25,000 every year, which's a lot of money when the power of compounding works on your investment.
Even in terms of flexibility, a lot of people say that Ulip has a drawback in terms of the five-year lock-in period.
In my view, when consumers invest in equity, all we tell them is that a three-year and five-year is not enough. You should invest much longer if you really want to build wealth. The same is the case with Ulip. If you stay invested for a longer duration, the ups and downs of the market would never be able to hurt your investments.
After all, the best comes to those who wait rather than force results!
The author is the CEO and Co-founder of  PolicyBazaar.com.
Check out our in-depth Market Coverage, Business News & get real-time Stock Market Updates on CNBC-TV18. Also, Watch our channels CNBC-TV18, CNBC Awaaz and CNBC Bajar Live on-the-go!