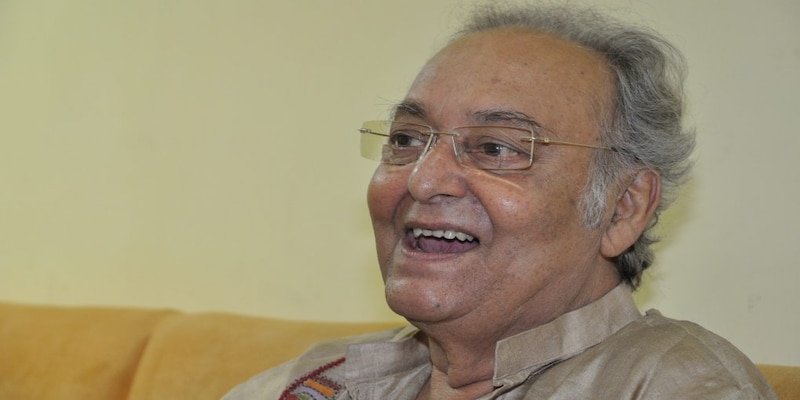 Iconic Bengali actor Soumitra Chatterjee died on Sunday after an over-a-month-long battle with multiple ailments, a statement issued by the hospital, where he was undergoing treatment, said. He was 85.

Iconic Bengali actor Soumitra Chatterjee died on Sunday after an over-a-month-long battle with multiple ailments, a statement issued by the hospital, where he was undergoing treatment, said. He was 85. The thespian is survived by wife, son and daughter. Chatterjee was admitted to the hospital on October 6 after he tested positive for COVID-19. He recovered from the infection, but his condition did not improve as he suffered from multiple ailments, including neurological complications.

Today, many a film critic/enthusiast/connoisseur will via the virtue of their superlative vocabulary & writing prowess try to impress upon the reader that Soumitra Chatterjee was an actor par excellence, that his demise may stand testimony to the end of an era, that he truly was a ‘Giant Among Men’.
I shall attempt no such thing.
Also, I refuse to address Chatterjee, the 85-year old acting powerhouse, who would have turned 86 this January in the past tense.
Soumitra Chatterjee, and I know I do not just speak for myself, has inadvertently played our ‘conscience keeper’ through the characters he portrayed on screen for over six decades.
In Apur Sansar (The World of Apu, 1959), his debut film, Chatterjee plays the eponymous Apu, the dreamy, sensitive, uncorrupt, conscientious loner who suddenly finds himself hurled towards a marriage out of nowhere. Startled as he is, slowly and steadily, Apu & Aparna (played by Sharmila Tagore, her debut as well) discover love & companionship amidst the dreary chores of everyday life.
Ray, inevitably explores the nuances of a relationship, based on the deep love and friendship between the two protagonists, through the simple acts of dining together or childlike pranks of bursting a paper balloon. The excruciating pain of losing Aparna during childbirth turns Apu into a pale shadow of his earlier self, forcing him into a whirlpool of depression and loneliness, away from his newborn son, who he subconsciously blames for her death. However, one look at the errant boy sends him into an epiphany, perhaps making him see a part of his beloved Aparna in his son. The character of Apu is a succinct reminder of the inevitability of melancholy in our lives, and yet why we must keep moving ahead.
In Saat Paake Bandha (1963), Chatterjee plays Sukhendu, a meritorious and somewhat of a socially awkward college professor, who gets married to Archana (played by Suchitra Sen), much to the chagrin of her mother. The constant interference of the wife’s mother eventually takes a toll on their relationship, causing the marriage to disintegrate. But, even as the mother-in-law’s ill-treatment of her son-in-law leads to their marital discord reaching a flashpoint, Sukhendu’s flawed entitlement or his inability to rise beyond the petty patriarchal mindset serves as a catalyst as well. Chatterjee’s wonderfully restrained performance alongside the colossal Sen has catapulted the film to the list of Bengal’s all-time classics.
In Sonar Kella (The Golden Fortress, 1974) & Joy Baba Felunath (The Elephant God, 1979), Chatterjee dons the hat of Pradosh Chandra Mitter alias Feluda, the cerebral Bengali private investigator who depends more on his ‘Magajastro’ than his .32 colt revolver. A maverick with a razor-sharp mind & encyclopedic knowledge who loves smoking his Charminar cigarette & yet never misses out on early his yoga sessions, Feluda is both an enigma & at the same time your ever-helpful next-door neighbour you’d turn towards when in a crisis. He also doesn’t shy away from calling a spade a spade or from calling out the idiosyncrasies of Lalmohan Ganguly (played by Santosh Dutta) from time to time. But, when his adversary plays a prank on Ganguly, Feluda the protective friend is livid to no end. Chatterjee, with his riveting acting & captivating screen presence, elevates the character of Feluda to the stature of that of a demi-god, one whose moral compass could never falter. And even though many talented actors have reprised the character on-screen ever since, Chatterjee’s rendition remains inimitable.
In Hirak Rajar Deshe (In The Land Of The Diamond King, 1980), we meet Udayan Pandit, the righteous and the same time rebellious school teacher who is not quite enamoured by the King’s profligate behaviour and is secretly planning an uprising to bring an end to his tyrannical rule. An allegory on politics, the film throws us into the middle of a dystopian fantasy kingdom, where state oppression is the norm of the day. And here, we meet Udayan Pandit, played by Chatterjee, a lone crusader daring to swim against the tide, willing to stand up against the brute force of the state. What makes the character stand out despite a relatively smaller screen time, is the fact that Udayan Pandit, despite the order of the day pointing towards sycophancy and meek subjugation relies more on his value system and more importantly, his conscience. And that’s what Soumitra Chatterjee is. Our Conscience Keeper.
(Edited by : Abhishek Jha)
Check out our in-depth Market Coverage, Business News & get real-time Stock Market Updates on CNBC-TV18. Also, Watch our channels CNBC-TV18, CNBC Awaaz and CNBC Bajar Live on-the-go!