'Steel Man of India' Jamshed Irani passes away at 86

'Steel Man of India' Jamshed Irani passes away at 86 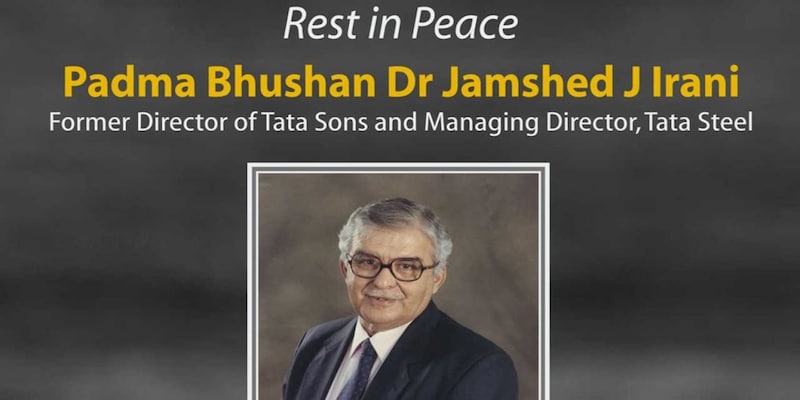 Known as the 'Steel Man of India', former Tata Steel MD Dr Jamshed J Irani passed away on Monday. He was 86. He took his last around 10 pm at Tata Main Hospital in Jamshedpur.

"We are deeply saddened at the demise of Padma Bhushan Dr. Jamshed J Irani, fondly known as the Steel Man of India. Tata Steel family offers its deepest condolences to his family and loved ones," Tata Steel said in a tweet.
N Chandrasekaran, Chairman, Tata Sons, condoled the demise of Irani and said, "Dr J J Irani was a quintessential Tata man. He was a towering corporate personality whose contribution to the steel industry was immense. Dr Irani will be deeply missed by all of us at Tata Group and we pray for his departed soul."
Irani is survived by his wife Daisy Irani and his three children, Zubin, Niloufer and Tanaaz.
Education
Irani was born on June 2, 1936 in Nagpur to Jiji Irani and Khorshed Irani.
He completed his BSc from Science College, Nagpur in 1956 and MSc in Geology from the Nagpur University in 1958.
He then went to the University of Sheffield in the United Kingdom (UK) as a J N Tata scholar, where he secured a Masters in Metallurgy in 1960. He later secured a PhD in Metallurgy in 1963.
Career
Irani was associated with Tata Steel for over four decades. He retired from the board of Tata Steel in June 2011.
He started his professional career with the British Iron and Steel Research Association in Sheffield in 1963. He returned to India to join The Tata Iron and Steel Company (now Tata Steel) in 1968 and joined the firm as Assistant to the Director in-charge of Research and Development.
He went on to become General Superintendent in 1978, General Manager in 1979, and President of Tata Steel in 1985. He became Joint Managing Director of Tata Steel in 1988, and Managing Director in 1992 before retiring in 2001.
He joined the Board of Tata Steel in 1981 and was also a Non-Executive Director from 2001 for a decade. Besides Tata Steel and Tata Sons, Dr Irani also served as a Director of several Tata Group companies, including Tata Motors and Tata Teleservices.
Check out our in-depth Market Coverage, Business News & get real-time Stock Market Updates on CNBC-TV18. Also, Watch our channels CNBC-TV18, CNBC Awaaz and CNBC Bajar Live on-the-go!