CAIT has been butting heads with Amazon, Flipkart and other e-commerce players for the last few years amid growing competition in India’s retail market.

The Confederation of All India Traders (CAIT) held nationwide protests against e-commerce major Amazon. The organisation, which consists of eight crore traders and 40,000 trading associations, protested across 500 districts. CAIT’s protests were against Amazon’s alleged unethical practices in the country. Traders held placards with depictions of Amazon founder and former CEO Jeff Bezos.
The traders’ body alleged that Amazon had sold marijuana worth Rs 1 crore through its platform, earning a 66 percent commission on the drug, and was also responsible for selling chemicals that were used to make bombs for the Pulwama attack. They also protested against Amazon for reportedly selling poison on its platform.
Also read: CAIT approaches NCB seeking probe into alleged use of Amazon's platform to source marijuana
“Traders @CAITIndia have staged a nationwide protest today against recent news of continued unethical malpractices by #Amazon of sellings (sic) drugs, selling chemicals used for bombs in Pulwama and selling poison. The protest in New Delhi was led by Shri @praveendel & Shri @AhujaVipen,” the body tweeted.

Traders @CAITIndia have staged a nationwide protest today against recent news of continued unethical malpractices by #Amazon of sellings drugs,selling chemicals used for bombs in Pulwama and selling poison. The protest in New Delhi was led by Shri @praveendel & Shri @AhujaVipen. pic.twitter.com/gOkAxJ2i4y

The traders were also protesting against the GST council’s decision to hike the GST rate on textile and footwear.
Earlier, Madhya Pradesh Police busted a racket of marijuana that was being sold as curry leaves through the Amazon portal. 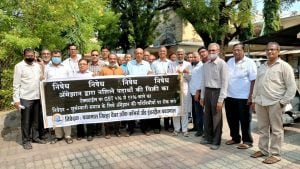 “Reports that Amazon executives have been arrested or charged as part of this case are incorrect and we are not aware of any Amazon executives being named in the investigation. On the contrary, Amazon continues to assist with the investigation. There are media reports of third party delivery contractors being investigated, but we cannot confirm these reports,” Amazon had stated in response.
Also read: CAIT slams Niti Aayog for interfering in e-commerce rules
The powerful traders’ body has been butting heads with e-commerce platforms like Flipkart and Amazon for the last few years amid growing competition in India’s retail market. CAIT had repeatedly asked for Amazon’s licence to be suspended for its alleged role in selling the chemicals used for making bombs used in the Pulwama attack, and for breaching FDI rules through its operations in India.
The group was also instrumental in lobbying for the new draft e-commerce rules, where the amendments are focused on anti-competition practices, protectionist policies and increased compliance burden on e-commerce entities.
Also read: Explained: Why e-commerce companies are opposing new draft rules
(Edited by : Shoma Bhattacharjee)
Tags
next story