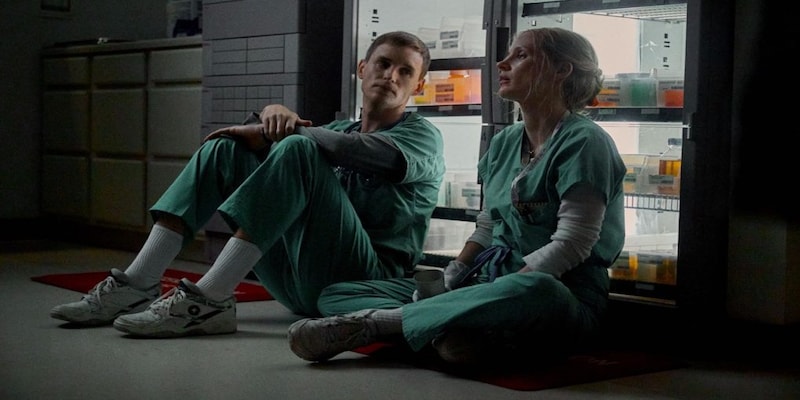 It’s common for true-crime stories to test the humanity of an ordinary working professional caught in an extraordinary circumstance. But what sets The Good Nurse apart from most similar films is its rejection of violence as a tool for justice. It is available for streaming on Netflix.

In the last five minutes of Delhi Crime’s second season, DCP Vartika Chaturvedi calls the daughter of one of the senior citizens killed by a mysterious gang in South Delhi to tell her that they have nabbed the culprit. When the woman questions Chaturvedi about the killer’s motive, she says, “Unfortunately, we seldom understand why people commit these kinds of crimes. Criminals can’t explain it when we ask. It haunts us but there are no answers in the eyes of a killer.”

Chaturvedi’s response holds perfectly for Netflix’s latest true-crime thriller, The Good Nurse. Directed by Danish filmmaker Tobias Lindholm — his first English language film — The Good Nurse is based on journalist Charles Graeber’s 2013 nonfiction bestseller of the same name. It details the horrific murders by Charles Cullen in the 16 years he served as a nurse in nine hospitals across the American states of New Jersey and Pennsylvania.
The film opens in the Intensive Care Unit (ICU) of Pennsylvania’s St. Aloysius Hospital. It’s 1996. A patient’s condition suddenly worsens. Nurse Charlie Cullen (Eddie Redmayne) is the first to respond to the distress call. He cries for help as he tries to revive the patient. Soon, others follow and take charge. The camera zooms in on Charlie as he recedes into the periphery and the patient dies despite the frantic efforts of the team of medical professionals.
Cut to seven years later. We’re now in Parkfield Memorial Hospital, New Jersey, and the camera begins to follow Amy Loughren (Jessica Chastain), an overworked ICU nurse with a severe heart condition and no health insurance. A single mother of two young girls, she’s struggling to hold it all together. Things soon begin to look like they can fall apart any minute. Enter Charlie. The godsend. He begins to help her with the caregiving, both at the hospital and at home.
Bolstered by Charlie’s companionship, Amy’s life begins to get some semblance of stability, but just then, inexplicable patient deaths start to shake the hospital. Mandate forces Parkfield to call external detectives for investigation. But eager to wash their hands off the matter, the hospital authorities offer little help and do everything to stonewall the probe. However, our sleuths (Nnamdi Asomugha and Noah Emmerich), egged on by a few flimsy clues, plod on nevertheless. Charlie soon comes under the scanner. But to reach him, they need Amy.
Chastain and Redmayne — both Academy Award winners — are solid as nurses standing on two sides of the spectrum but bound together by friendship. They elevate the script effortlessly, like only actors of mammoth talent can, swiftly stitching together every hole, every question that remains unanswered. Chastain makes her emotional and physical fragility painfully palpable; you can almost touch her tiredness. Redmayne, meanwhile, does a remarkable job of humanising evil. He makes it look so every day, it’s chilling. Watch out for a scene toward the end when the detectives force a confession out of him. He doesn’t reveal anything at all and yet, says so much.
The tight editing by Adam Nielsen deserves a special mention too. At 123 minutes, The Good Nurse is as fast-paced as you’d expect a thriller to be and yet, it never loses its meditative strain. It’s probably too sanitised for a medical crime drama, but rather than glorifying the horrors of Charlie’s violence, the film focuses more on celebrating Amy’s quiet bravery — her decision to aid the investigation against a close friend and colleague at the risk of losing her job, life, and the safety of her children
The Good Nurse wonderfully exposes how little hospitals care for the lives of their patients and the lengths they can go to cover up a blunder and save face. Of the nine medical establishments where Charlie worked in 16 years, most were suspicious of him but did nothing about it. They just let him flit from one hospital to the other killing patients. Finally, when charged, he pled guilty to murdering 29 people. The actual number is believed to be a lot higher, somewhere close to 400.
But healthcare is hardly the only industry where large companies set offenders free without any probe or consequence so they can join somewhere else and wreak havoc on unsuspecting people all over again. It’s not our problem if it’s not in our backyard, right? And if it is, just bury it or kick it far enough so it falls in someone else’s. No one becomes a serial offender overnight. It’s the decided silence of people in the know that creates criminals.
It’s common for true-crime stories to test the humanity of an ordinary working professional caught in an extraordinary circumstance. But what sets The Good Nurse apart from most similar films is its rejection of violence as a tool for justice. In choosing compassion over judgment without risking the safety of others, Amy proves herself not just a good, but a great nurse, which is the right of every patient seeking healthcare.
Read other pieces by Sneha Bengani here.
Check out our in-depth Market Coverage, Business News & get real-time Stock Market Updates on CNBC-TV18. Also, Watch our channels CNBC-TV18, CNBC Awaaz and CNBC Bajar Live on-the-go!