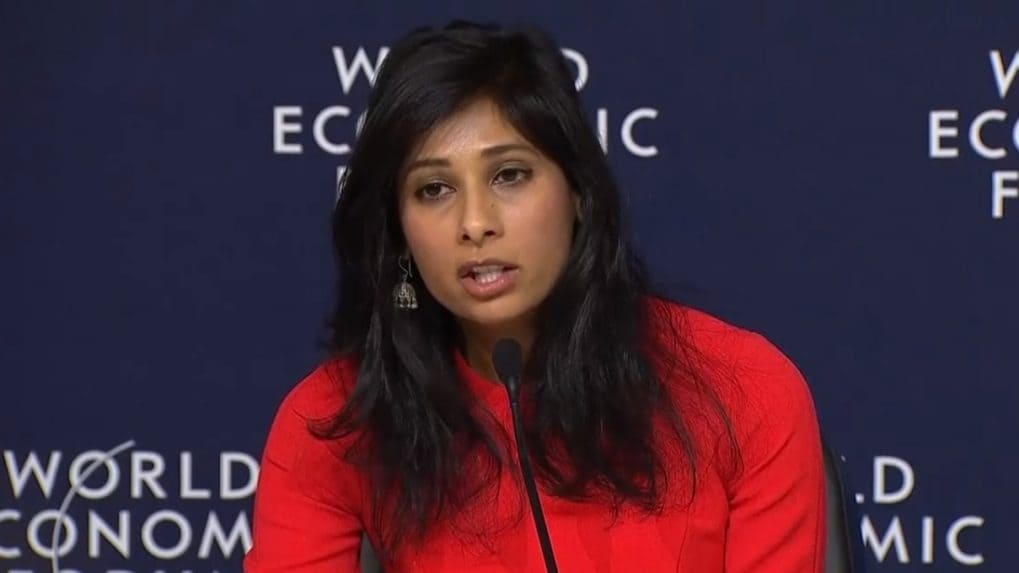 The International Monetary Fund (IMF) on Monday revised downward India’s gross domestic product (GDP) growth projection to 4.8 percent for FY20 and to 5.8 percent for FY21. Gita Gopinath, the chief economist at IMF, said that the revision was due to weakness in credit and rural income growth. Recovery is likely to begin in the first half of 2020-21, she added.

Indian economy has been in turmoil with the GDP rate in September quarter slowing to lowest in years. Gopinath said that the Reserve Bank of India's policy rate cuts have stimulated growth which is expected to "feed into the system over the next 12 years."

Gopinath in an interview with CNBC-TV18 at the World Economic Forum in Davos also laid emphasis on the need for fiscal consolidation, policies for rural India in a bid to help with consumer spending, and the China-US trade deal. Edited excerpts:

Q: You had given me a heads-up when we last spoke that there was going to be a significant cut to India’s gross domestic product (GDP) forecast and the International Monetary Fund (IMF) has just put out its economic outlook report today — 4.8 percent that is the number that has come in for India. What is the sense that you get in terms of how long we are going to be in this cycle where credit growth has not picked up and the economy looks like it is in trouble?

A: One of the major factors behind the downward revision was this weakness in credit growth. But there is also some part of it that has to do with weakness in rural income growth. We are expecting to see that about the first half of fiscal year 2020-2021 is when we should start seeing the recovery happening. But we do have growth going back up to 5.8 percent in the following fiscal. But there are a couple of month’s stabilisation and then we should see a recovery.

Q: In terms of policy prescription now and we did talk about this when we last spoke as well. We have got a union budget coming up, what would you think are the tools that the government needs to deploy at this point in time to stimulate demand and stimulate growth?

A: I want you to recognise that there is a fair amount to stimulus that has come from monetary policy rate cuts and we expect that to feed into the system over the next 12 months. In terms of priority, it has to be how do you resuscitate credit growth, but at the same time making sure that there is not going to be another non-performing asset problem in the future. I think that is the tricky balance that government have to hit.

A: On the fiscal side there was already one major reform that was done which was the corporate tax cut and we think that should affect though of course it takes a while, it is not something that happens immediately. India does have to pay attention to fiscal consolidation I think that is important. If they are able to mobilise more revenues then that gives them more space. At the same time I think the policies in terms of transfers to the rural area, rural income transfers those should help much more immediately in terms of consumer spending.

Q: You spoke of fiscal consolidation, if there is a pause or a deviation from the roadmap that has been set out by the government to try and stimulate growth and demand, would that be of concern?

A: We always think of fiscal consolidation also from a medium term perspective, so I think it is very important for the government to signal such commitment to fiscal prudence going forward and of course the details of the spending also matters, it is not just what your fiscal deficit is, it is what your spending on that matters.

Q: So if they were to spend more on infrastructure for instance and there is a deviation, then you believe that the markets and global institutions like the IMF will take that?

A: I think a comprehensive policy that takes care of fiscal sustainability, meets the budget targets that have been set out by the government themselves is important and if there is spending it would have to be on investments, on infrastructure because those raise outputs and help with the fiscal situation.

Q: US and China — the trade deal — the first phase has just got done. Do you feel a little more confident now at least as far as trade is concerned in 2020?

A: We welcome the phase I deal, but the risks are certainly not off the table. There is a lot more to be done and we hope that these negotiations will be durable, that it will be more comprehensive and more of the tariffs will be rolled back. But again I think we should welcome this at this current juncture.