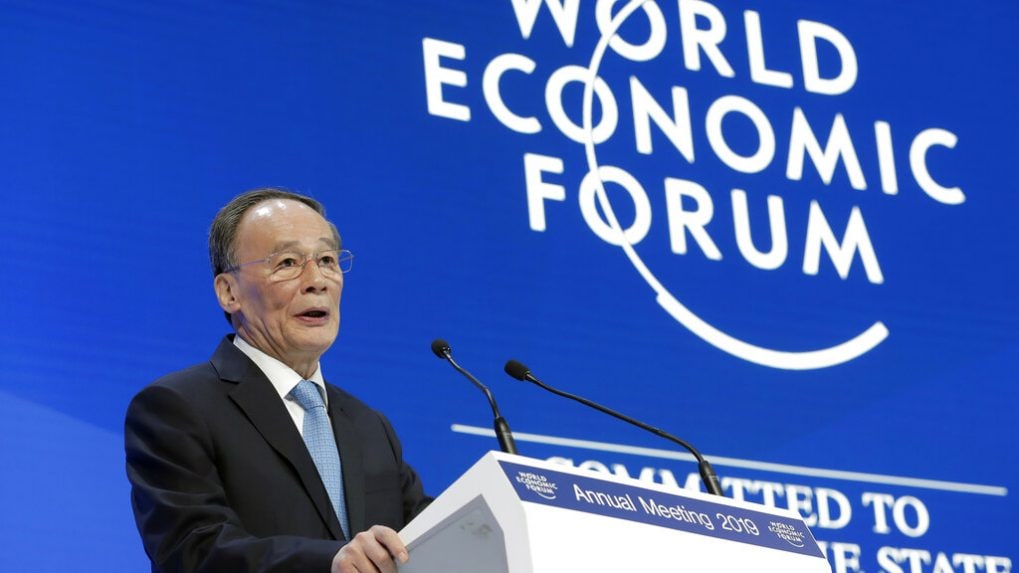 China has moved away from revolution to reform and from a planned to a market economy, China's Vice President Wang Qishan said on Wednesday as he asserted that his country's interests are now linked with that of the world.

He also said the US and Chinese economies are in such a state today that either side cannot do without the other and this is the basic judgement one should have.

In a special address at the World Economic Forum Annual Meeting 2019, he said the past seven decades have witnessed remarkable achievements in China's development.

"Our nation has made a historical transformation in terms of social productivity and composite national strength and delivered initial prosperity to its people who were once struggling to meet their basic living needs," he said.

"We will stay true to the founding mission of the Communist Party of China, uphold its leadership and China's fundamental socialist political and economic systems and be guided by a people-centered development philosophy.

"From the founding and building of the People's Republic to the launching of the reform and opening-up programme and the shifting of focus to economic development, we have moved away from revolution to reform, from a planned economy to a market economy and from isolation to all-round opening-up," Qishan said.

"As we continue to follow the socialist path with distinctive Chinese features, we will respect other peoples' independent choices of paths and systems.

"Today, China's interests and future are closely linked to those of the world. While developing itself, China also wishes to work with all countries for common development and a community with a shared future for mankind," he added.

On the global economy, he said problems such as lack of new growth drivers, unbalanced development and uneven income distribution have intensified in the recent years.

"Many countries are increasingly looking inward when making policies; barriers to international trade and investment are increasing; and unilateralism, protectionism and populism are spreading in the world. All these are posing serious challenges to the international order," he said.

He said the BRICS countries, Vietnam, Indonesia and other emerging economies have risen, taking forward economic globalisation to a new stage.

"In this process, China has moved up from the low end to the medium and high end of the global industrial chain. The nearly 1.4 billion Chinese who are enjoying greater prosperity have unleashed huge demand backed by purchasing power. And this has unlocked enormous market potential that no one can afford to ignore," he said.

"In response to the problems and challenges in the world today, the international community need to make serious and deep-going analysis, and more importantly, take collective actions," Qishan said.