Zomato IPO: Delivering the India consumer story on your plate!

Zomato IPO: Delivering the India consumer story on your plate!

From a startup that sought to solve a 'hungry' problem to becoming the first Indian unicorn to hit the public markets - Zomato's rise is the coming-of-age of not just the New India, but also its young startups

"Why order food online when you can eat home-cooked food?"

From early customers to now IPO investors - everybody has put this question to Deepinder Goyal. In response, the Zomato founder once said, "Food is entertainment."
The killer of everyday boredom, the breaker of the dal-chawal cycle, the harbinger of appetizing treats, the purveyor of convenience...
From a startup that sought to solve a 'hungry' problem to becoming the first Indian unicorn to hit the public markets - Zomato's rise is the coming-of-age of not just the New India, but also its young startups.
"Going public is sort of growing up," said Deepinder Goyal in a chat with CNBC-TV18’s Managing Editor Shereen Bhan at the HT Summit in 2019.
The IPO-bound train of startups is taking on more passengers as it rushes forth with payments providers Paytm and MobiKwik, insurance platform PolicyBazaar, beauty & fashion retailer Nykaa and e-commerce giant Flipkart with many more waiting on the platform with a ticket in hand.
After undertaking a big shake-out of how traditional India consumed food, Zomato is now crucially riding to build an appetite among Indian investors, who are scratching their heads skeptically over how to swallow up and invest in businesses like Zomato, which are loss-making, but full of potential. 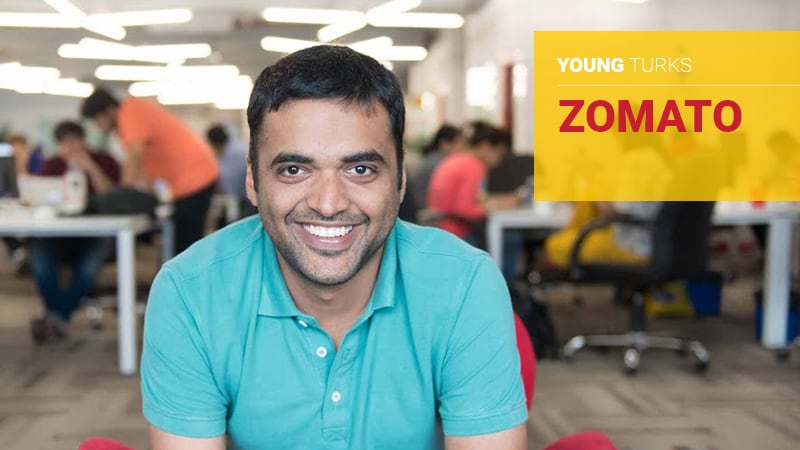 When a CEO bats on straight foot, Zomato had ranked at the bottom of the 2020 Fairwork scores and CEO Deepinder Goyal took complete responsibility.
The Investor Pitch
“We are all set to grow to a much larger scale. We have already proven our success. Trying to expand into more cities in India will obviously take more capital. The new revenue models we are thinking of will require huge capital expenditure. So, these are the things for which we need funding,” said Deepinder Goyal in his first pitch to venture capital investors on CNBC-TV18’s Young Turks way back in 2011. A decade later, he is making the same pitch to public market investors.
In a country with over a billion people, who are taking to the internet faster than a click, online food delivery aggregators are only scratching the surface. The runway is long with just about 70-100 million people, who think of ordering food online on a monthly basis. In FY21, Zomato had about 32 million monthly active users.
Over FY18-21, Zomato’s revenue grew at a CAGR of 62 percent. But, some investors would prefer to look at the bottom line, which is in the red. In FY21, losses stood over Rs 800 crore.
However, not only Zomato’s, but no food delivery company’s bottomline is in the green globally. Still, over the last six months, global stock markets have welcomed Deliveroo in the U.K. and DoorDash in the U.S. along with one of South-East Asia’s largest unicorns - Grab. So, Zomato’s rise or fall will be closely tracked. Not only domestically, but globally too.
In recent years, the primary concern has been cash burn pumped by the ‘privilege’ of getting large cheques from private investors. Now, Zomato’s public market investors will surely throw the dreaded question in the upcoming quarterly reviews: when will the cash burn end and profits turn up on the P&L statement? 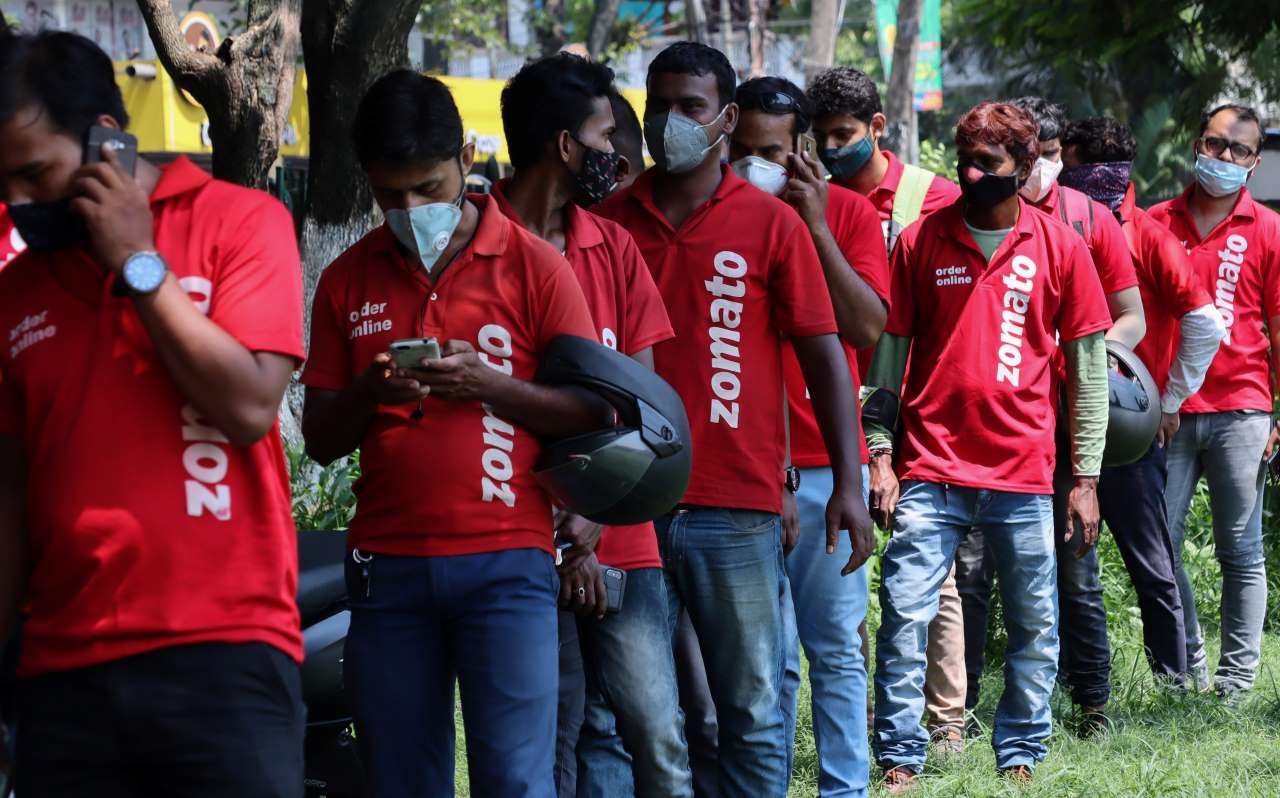 In response, Zomato has indicated that it wants to scale up first before turning its attention to profits. In regulatory filings, the company said, “We expect our costs to increase over time and our losses will continue given significant investments expected toward growing our business.”
Despite showing up at the stock markets with a loss-making prospect, Zomato is expected to become the largest IPO of the year in India with a post-money valuation of $8.9 billion. That’s a surge of 49 percent since it closed its previous funding round at a valuation of $5.4 billion. Through the IPO, Zomato targets a fundraise of $1.3 billion or Rs 9,375 crore.
Consider this: While making his first appearance on CNBC-TV18’s Young Turks in 2011 as the founder of Zomato’s former self Foodiebay, Deepinder Goyal pitched his restaurant-listing idea to investors and asked for just $1 million in funding!
The Kitchen Sink: The Years Of Growing Up
In the early 2000s, the lightning bolt of entrepreneurship struck Deepinder Goyal when he was a student at Indian Institute Of Technology, Delhi. “We were a group of friends and all of us always wanted to have a startup,” he said.
So, Deepinder started a web development company to build online sites for small restaurants in Delhi. It failed. But, he walked away with an insight: Why create separate websites for these restaurants when all of them should be on one website?
In 2008, Deepinder Goyal opened restaurant-listing site Foodiebay with his Bain & Co colleague Pankaj Chaddha with an initial investment of Rs 25 lakh.
The duo doubled up as food connoisseurs while visiting restaurants before starting to list menus, write reviews and provide ratings for people who needed a ‘heads up before heading out’. By 2011, Foodiebay needed $1 million to sustain itself over the next 18-24 months. The seed fund came from Sanjeev Bikhchandani’s Info Edge.
After rebranding Foodiebay as Zomato, the business started overseas operations - from UAE and Sri Lanka to Lebanon. The ambition grew as global investors - Sequoia Capital and Temasek - arrived with big cheques. Soon, food delivery became the core engine of Zomato with restaurant listings, reviews and ratings now playing an auxiliary role.
In 2018, Zomato shifted gears becoming a unicorn following multiple rounds of investment by the Chinese-owned Alibaba affiliate Ant group, which skyrocketed valuation to $2 billion. That year, co-founder Pankaj Chaddah left. Zomato’s monthly revenue rate hit $100 million and monthly orders crossed 20 million.
Most importantly, the battle was on. In 2018, rival Swiggy raised $1 billion - the single largest fundraise by any foodtech startup in India at the time. The online food delivery segment was inching close to becoming a duopoly.
As competition went up, Deepinder Goyal knew what was coming. “All it takes to fight in that space is money,” he said. Duopoly, Discounts & Daggers
In fact, Swiggy is older than Zomato when it comes to food delivery. Started in 2014, the Bengaluru-based Swiggy pushed rapidly in South India while Zomato busied itself with global expansion of its restaurant listing business via acquisitions.
Once Gurgaon-based Zomato entered the food delivery market roughly two years after Swiggy, the competition started playing out in different halves of India. Zomato ruled the North while Swiggy dominated the South. Eventually, many smaller players could hardly face the financial firepower of the two biggies in the space.
"Over the last couple of years, it has been a two-horse race for three times. Then, somebody else has come in, somebody else is gone," said Deepinder Goyal in an interview with CNBC-TV18 in 2019.
As it is today, Swiggy was battling Zomato toe-to-toe in all parameters - average order value, monthly deliveries, reach in terms of cities and more.
The battle escalated between the two rivals when UberEats went up for sale. Given UberEats’ strong presence in the South, it made sense for Swiggy to show interest. But, withdrew after hearing the ‘astronomical’ quotation from the other side of the table.
Itching to go truly pan-India, Zomato swooped in to acquire UberEats to rattle Swiggy in its backyard. In exchange, UberEats secured a plump 10 percent stake in Zomato.
In this kind of aggressive market, where not an inch was given up, both Zomato and Swiggy began to run out of funds as fast as they raised them.
"When somebody else, who is trying to compete with you, has a lot of money, for a short time, you have to react with money itself," said Deepinder Goyal.
He assured that Zomato was ‘not slugging it out with Swiggy in a stupid way’, but finding ways to keep up the ambition and yet reduce the cash burn led to disgruntled stakeholders.
In 2019, Zomato’s delivery riders went on a strike in more than one city. They protested the food delivery aggregator’s decision to withdraw some of the incentives, which led to lower earnings per delivery. This followed a layoff of nearly 10 percent of customer, delivery and merchant support teams at Zomato’s headquarters in Gurgaon.
Meanwhile, the restaurants went up in arms as deep discounts offered by Zomato and Swiggy kept customers from visiting the diners. Zomato was accused of favouritism, monopolistic trade practices, greed and exploitation. It was just the start. This clamour would only rise to a crescendo in times to come.