Will tax cuts be enough to aid Q2 earnings? Here's what brokerages have to say

Updated : October 09, 2019 06:30 AM IST
The second quarter earnings are just around the corner, and the brokerages are already predicting more fireworks this time.
Edelweiss, Prabhudas Lilladher and Kotak Institutional Equities place their earnings preview in their respective reports.

The second-quarter earnings season is already around the corner and most brokerages are contradicting the idea of corporate tax cuts reflecting on companies' books. Edelweiss believes that it’s time to focus on the earnings and not the euphoria that was triggered post-tax cut announcement. Kotak Institutional Equities also said that the Q2FY20 net profit/earnings numbers are not comparable with Q1FY20 and Q2FY19 due to lower corporate tax rate and tax reversals due to higher tax paid in Q1FY20.

Edelweiss in its report also added, “For Q2FY20, we forecast revenue/profit to decline 3 percent/6 percent. Top-line growth of most sectors is likely to moderate with only pharma and banks posting 10 percent+ growth. On the bottom-line front, Q2FY20 will have one-offs- impairment on deferred tax assets, write-back of Q1FY20 tax, lower tax rate. Hence, analyzing could be challenging.”

Prabhudas Lilladher in its preview of Q2FY20 corporate earnings report said, “We estimate a decline of 0.3 percent in sales, an increase of 3 percent in EBITDA and 5.9 percent in PBT.” 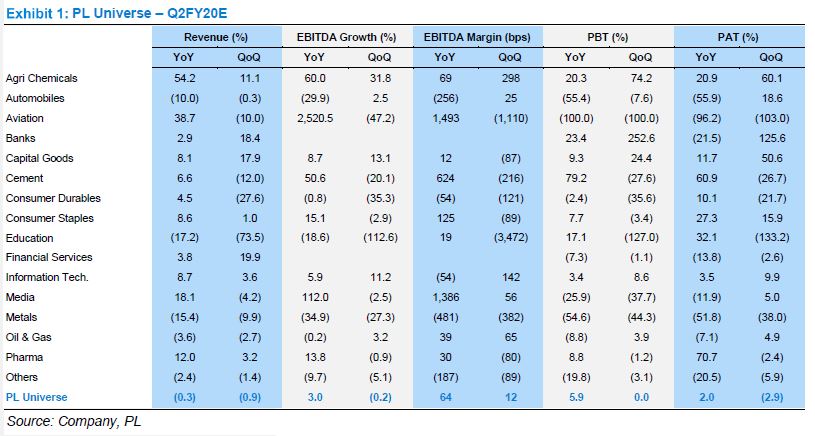 The brokerage report further said that despite a cut in corporate tax rates, the EPS for FY20 has not seen any appreciable increase. NIFTY is currently trading at 19.4x 1 year forward earnings which shows 6 percent premium to long term average 18.3, in comparison to 7 percent premium in August and 12 percent in July. We expect near term volatility to sustain given fears of rising corporate defaults and its impact spreading to more segments and sectors. We retain our 12-month NIFTY target of 12,488 which values markets at 19xFY21 EPS.

On the sectors’ front, Prabhudas believes that agriculture, aviation, pharma and media will show good sales growth while auto metals and oil & gas will be laggards. They further expect a widespread slowdown in consumer demand will have an impact on auto and consumer durables. Banks will gain due to lower provisions and while cement will show benefits of higher realizations.