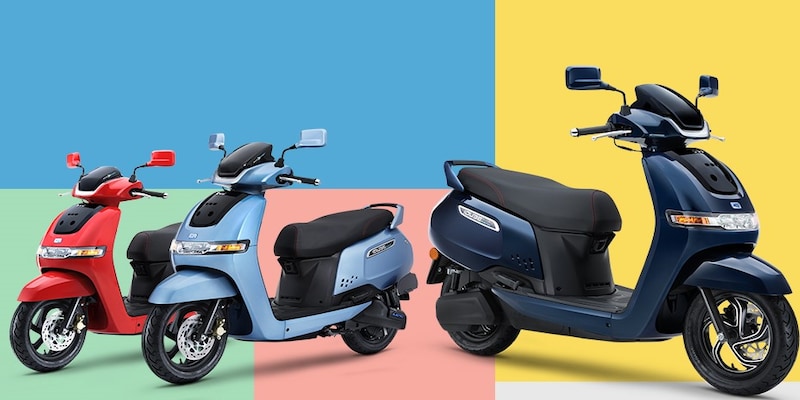 TVS Motor Company’s stock rose on Thursday, nearing its 52-week high, a day after the two-wheeler major kick-started a process to raise around $300 million to $350 million for its electric mobility business.

TVS Motor Company’s stock rose on Thursday, nearing its 52-week high, a day after the two-wheeler major kick-started a process to raise $300-350 million for its electric mobility business. TVS Motor is UBS’ top pick in the two-wheeler space. The global brokerage has set a target price of Rs 1,000 on the shares of the company, which were selling at Rs 761.30 on BSE at the time of writing, implying that it sees a 31 percent upside in the stock.
Goldman Sachs has a neutral call on the stock with a target price of Rs 660 per share.
How TVS Motor stock has performed in 2022 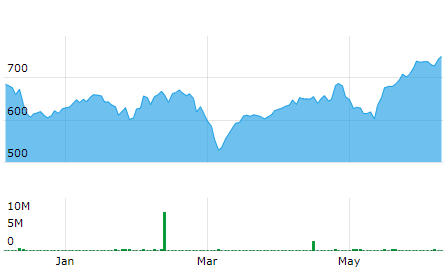 Source: BSE
TVS Motor shares have given a return of more than 20 percent to investors in 2022 (year-to-date) as against the benchmark Sensex, which has declined slightly over 7 percent during the period.
The stock has been witnessing an uptick at a time when the two-wheeler maker’s electric vehicle verticle is growing at a fast pace. In May, the company sold 2,637 units of its iQube, which means sales of the electric scooter went up 88 percent compared to 1,402 units sold in April.
If plans to raise over $300 fructify, TVS Motor would become the third listed company to raise funds for an electric vehicle subsidiary apart from Tata Motors and Greaves Cotton.
“The fund raise process was launched last week, and feelers have been sent to top private equity funds as well as sovereign wealth funds and pension funds. The funds with a sustainability pool may be particularly interested,” a source told Moneycontrol.
Meanwhile, there has been a 4.5 times jump in search interest for iQube with the launch of its new variant. At present, iQube is available in 33 cities, and the company looks to sell it across 85 cities across the country.
Last week, the two-wheeler maker said it aims to build a "sustained dominant play" in the electric vehicle segment by leveraging various government initiatives like production-linked incentive schemes, among others.
As per its annual report for 2021-22, the company has robust plans to scale up its play in the electric segment.TVS sold more than 10,000 EVs in 2021-22. Overall, the company said it expects to outperform the industry in terms of sales growth on the back of new product launches and economic activity once again gathering pace.
"Due to the strong product line-up, unwavering focus on consumer, quality, cost and the strong new launches, the company is confident about outperforming the industry, despite the global challenges and a tough business environment," it said in the annual report 2021-22.
Check out our in-depth Market Coverage, Business News & get real-time Stock Market Updates on CNBC-TV18. Also, Watch our channels CNBC-TV18, CNBC Awaaz and CNBC Bajar Live on-the-go!